Myrna Loy (August 2, 1905 – December 14, 1993) was an American actress. Trained as a dancer, she devoted herself fully to an acting career following a few minor roles in silent films. Originally typecast in exotic roles, often as a vamp or a woman of Asian descent, her career prospects improved following her portrayal of Nora Charles in The Thin Man (1934). Her successful pairing with William Powell resulted in 14 films together, including five subsequent Thin Man films.

Loy was born Myrna Adele Williams in Helena, Montana,[1][2] to Adelle Mae (née Johnson) and rancher David Franklin Williams, in nearby Radersburg.[3][4] Her paternal grandparents were natives of Wales, and her maternal grandparents were Swedish and Scottish.[5][6] Her first name came from a train station whose name her father liked. Her father was also a banker and real estate developer and the youngest man ever elected to the Montana state legislature. Her mother studied music at the American Conservatory of Music in Chicago.

During the winter of 1912, Loy's mother nearly died from pneumonia, and her father sent his wife and daughter to La Jolla, California. Loy's mother saw great potential in Southern California, and during one of his visits she encouraged her husband to purchase real estate there. Among the properties he bought was land he later sold at a considerable profit to Charlie Chaplin so the filmmaker could construct his studio there. Although Loy's mother tried to persuade her husband to move to California permanently, he preferred ranch life and the three eventually returned to Montana. Soon afterward, Loy's mother needed a hysterectomy and insisted Los Angeles was a safer place to have it done, so she, Loy, and Loy's brother David moved to Ocean Park, where Loy began to take dancing lessons. They continued after she returned to Montana, and at the age of 12, Myrna Williams made her stage debut performing a dance she choreographed based on The Blue Bird from the Rose Dream Operetta[7] at Helena's Marlow Theater.[8]

Loy's father died on November 7, 1918 of Spanish influenza,[9] and Loy's mother was finally able to realize her dream to permanently relocate her family to California, where they settled in Culver City. Loy attended the exclusive Westlake School for Girls in Holmby Hills and continued to study dance in Downtown Los Angeles. When her teachers objected to her participating in theatrical arts, her mother enrolled her in Venice High School, and at 15, she began appearing in local stage productions.[10]

In 1921, Loy posed for Harry Winebrenner's statue titled "Spiritual," which remained in front of Venice High School throughout the 20th century and can be seen in the opening scenes of the 1978 film Grease. The statue was vandalized several times, and at one point was removed from display. However it has been rebuilt using bronze, and is on display again, surrounded by some thorny rosebushes to protect it.[11]

Loy left school at the age of 18 to help with the family's finances. She obtained work at Grauman's Egyptian Theatre, where she performed in elaborate musical sequences that were related to and served as prologues for the feature film. During this period she saw Eleonora Duse in the play Thy Will Be Done, and the simple acting techniques she employed made such an impact on Loy she tried to emulate them throughout her career.[12]

Loy in the 1926 film Across the Pacific

Portrait photographer Henry Waxman had taken several pictures of Loy, and they were noticed by Rudolph Valentino when the actor went to Waxman's studio for a sitting. He was looking for a leading lady for Cobra, the first independent project he and his wife Natacha Rambova were producing. She tested for the role, which went to Gertrude Olmstead instead, but soon after she was hired as an extra for Pretty Ladies, in which she and fellow newcomer Joan Crawford were among a bevy of chorus girls dangling from an elaborate chandelier.[13]

Rambova recommended Loy for a small but showy role opposite Nita Naldi in What Price Beauty? Although the film remained unreleased for three years, stills of Loy in her exotic makeup and costume appeared in a fan magazine and led to a contract with Warner Bros., where her surname was changed to Loy.[14]

Loy's silent film roles were mainly those of vamps and femme fatales, and she frequently portrayed characters of Asian or Eurasian background in films such as Across the Pacific, A Girl in Every Port, The Crimson City, The Black Watch, and The Desert Song, which she later recalled "...kind of solidified my exotic non-American image."[15] It took years for her to overcome this stereotype, and as late as 1932 she was cast as a villainous Eurasian half-breed in Thirteen Women. She also played a sadistic Chinese princess in The Mask of Fu Manchu, opposite Boris Karloff. Prior to that, she appeared in small roles in The Jazz Singer and a number of early lavish Technicolor musicals, including The Show of Shows, The Bride of the Regiment, and Under A Texas Moon. As a result, she became associated with musical roles, and when they began to lose favor with the public, her career went into a slump.

In 1934, Loy appeared in Manhattan Melodrama with Clark Gable and William Powell. When gangster John Dillinger was shot to death after leaving a screening of the film at the Biograph Theater in Chicago, the film received widespread publicity, with some newspapers reporting that Loy had been Dillinger's favorite actress.[16] 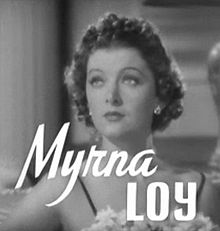 From the trailer for
Libeled Lady (1936)

After appearing with Ramón Novarro in The Barbarian, Loy was cast as Nora Charles in the 1934 film The Thin Man. Director W. S. Van Dyke chose Loy after he detected a wit and sense of humour that her previous films had not revealed. At a Hollywood party, he pushed her into a swimming pool to test her reaction, and felt that her aplomb in handling the situation was exactly what he envisioned for Nora.[17] Louis B. Mayer at first refused to allow Loy to play the part because he felt she was a dramatic actress, but Van Dyke insisted. Mayer finally relented on the condition filming be completed within three weeks, as Loy was committed to start filming Stamboul Quest.[18] The Thin Man became one of the year's biggest hits, and was nominated for the Academy Award for Best Film. Loy received excellent reviews and was acclaimed for her comedic skills. She and her costar William Powell proved to be a popular screen couple and appeared in 14 films together, one of the most prolific pairings in Hollywood history. Loy later referred to The Thin Man as the film "that finally made me... after more than 80 films".[19] 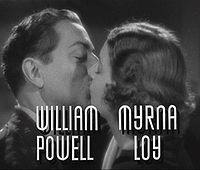 Her successes in Manhattan Melodrama and The Thin Man marked a turning point in her career and she was cast in more important pictures. Such films as Wife vs. Secretary (1936) with Clark Gable and Jean Harlow and Petticoat Fever (1936) with Robert Montgomery gave her opportunity to develop comedic skills. She made four films in close succession with William Powell: Libeled Lady (1936), which also starred Spencer Tracy and Jean Harlow, The Great Ziegfeld (1936), in which she played Billie Burke opposite Powell's Florenz Ziegfeld, the second "Thin Man" film, After the Thin Man, and the romantic comedy Double Wedding (1937). She also made three more films with Clark Gable. Parnell was a historical drama and one of the most poorly received films of either Loy's or Gable's careers, but their other pairings in Test Pilot and Too Hot to Handle (both 1938) were successes.

During this period, Loy was one of Hollywood's busiest and highest paid actresses, and in 1937 and 1938 she was listed in the annual "Quigley Poll of the Top Ten Money Making Stars", which was compiled from the votes of movie exhibitors throughout the U.S. for the stars that had generated the most revenue in their theaters over the previous year.[20]

By this time Loy was highly regarded for her performances in romantic comedies and she was anxious to demonstrate her dramatic ability, and was cast in the lead female role in The Rains Came (1939) opposite Tyrone Power. She filmed Third Finger, Left Hand (1940) with Melvyn Douglas and appeared in I Love You Again (1940), Love Crazy (1941) and Shadow of the Thin Man (1941), all with William Powell.

With the outbreak of World War II, she all but abandoned her acting career to focus on the war effort and worked closely with the Red Cross. She was so fiercely outspoken against Adolf Hitler that her name appeared on his blacklist. She helped run a Naval Auxiliary Canteen and toured frequently to raise funds. 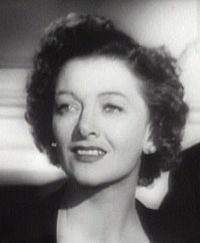 Loy in The Best Years of Our Lives

She returned to films with The Thin Man Goes Home (1945). In 1946 she played the wife of returning serviceman Fredric March in The Best Years of Our Lives (1946). In later years, she considered this her proudest acting achievement. Throughout her career, she championed the rights of black actors and characters to be depicted with dignity on film.

Loy was paired with Cary Grant in David O. Selznick's comedy film The Bachelor and the Bobby-Soxer (1947). The film co-starred a teenage Shirley Temple. Following its success she appeared again with Grant in Mr. Blandings Builds His Dream House (1948), and with Clifton Webb in Cheaper by the Dozen (1950).

Her film career continued sporadically afterwards. In 1960, she appeared in Midnight Lace and From the Terrace, but was not in another until 1969 in The April Fools. Her last motion picture performance was 1980 in Sidney Lumet's Just Tell Me What You Want. She also returned to the stage, making her Broadway debut in a short-lived 1973 revival of Clare Boothe Luce's The Women.

In 1981 she appeared in the television drama Summer Solstice [21] which was Henry Fonda's last performance.

Loy had no children of her own, though she was very close to her first husband Arthur Hornblow's children.

There were rumors that Myrna Loy had affairs with :

In later life, she assumed an influential role as Co-Chairman of the Advisory Council of the National Committee Against Discrimination in Housing. In 1948 she became a member of the U.S. National Commission for UNESCO, the first Hollywood celebrity to do so.[25] She was also an active Democrat.[26]

On December 14, 1993, she died during surgery in New York City at the age of 88. She was cremated in New York and the ashes interred at Forestvale Cemetery, in Helena, Montana.[29] 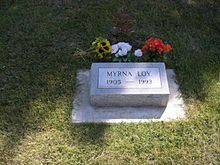 In 1965 she won the Sarah Siddons Award for her work in Chicago theatre. She also received a Lifetime Achievement Award from the Kennedy Center in 1988.

Although Loy was never nominated for an Academy Award for any single performance, after an extensive letter writing campaign and years of lobbying by screenwriter and then-Writers Guild of America, west board member Michael Russnow, who enlisted the support of Loy's former screen colleagues and friends such as Roddy McDowall, Sidney Sheldon, Harold Russell and many others, she received a 1991 Academy Honorary Award "for her career achievement". She accepted via camera from her New York home, simply stating, "You've made me very happy. Thank you very much." It was her last public appearance in any medium.

Myrna Loy has a star on the Hollywood Walk of Fame at 6685 Hollywood Boulevard. A building at Sony Pictures Studios, formerly MGM Studios, in Culver City is named in her honor.[30] A cast of her handprint and her signature are in the sidewalk in front of Theater 80, on St. Mark's Place in New York City.[31]

In 1991, The Myrna Loy Center for the Performing and Media Arts opened in downtown Helena, Montana, the capital of Montana, not far from Loy's hometown. Located in the historic Lewis and Clark County Jail, it sponsors live performances and alternative films for under-served audiences.

On August 2, 2005, the centenary of Loy's birth, Warner Home Video released the six films from The Thin Man series, on DVD as a boxed set.