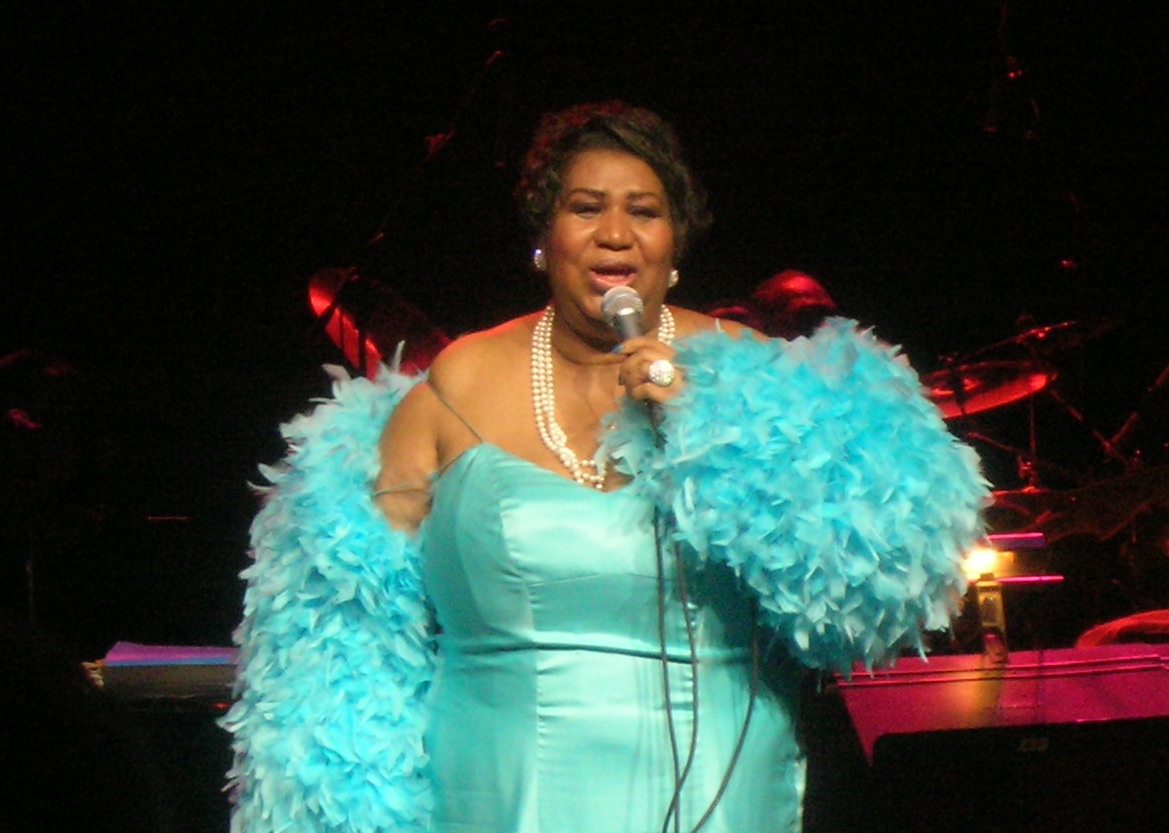 Aretha Louise Franklin (born March 25, 1942) is an American singer, songwriter, and . She is known to her fans as the "Queen of Soul" and is also affectionately called "Sister Ree". She is renowned for her soul recordings but is also adept at , rock, , pop and gospel. She is widely acclaimed for her passionate, soulful vocal style, which is aided by a massive and powerful vocal range.

Franklin is the second most honored female singer in Grammy history (after ). She has won twenty , which includes the Living Legend Grammy and the Lifetime Achievement Grammy. Aretha won eight consecutive awards between 1968 and 1975,

Franklin has had a total of twenty number-one singles on the Billboard R&B Singles Chart, two of which became #1 hits on the as well: "Respect" in the 1960s and her 1980s duet with , "".

On 3 January 1987, she became the first female artist to be inducted in the . [See [http://www.rockhall.com/inductee/aretha-franklin] ]

Franklin was born on March 25, 1942, in , to the Rev. C. L. Franklin, a minister, and . Aretha's parents had a troubled relationship and separated when Aretha was six. Siggers died of a when Franklin was ten. The fourth of five siblings, Aretha's father's first pulpit after Memphis was in . The family subsequently moved to where they grew up, Rev. Franklin assumed the pulpit of the New Bethel Baptist Church, and gained national fame as a preacher. Adept at the piano as well as having a gifted voice, Franklin became a child prodigy. By the age of fourteen, she signed a record deal with , where her father recorded his sermons and gospel vocal recordings, and she issued "" in 1956. Her earlier influences included and , both of whom spent a lot of time in Aretha's home.

In 1967 Franklin issued her first Atlantic single, "", a ballad that introduced listeners to her gospel style. Produced by , the song became Franklin's breakthrough single reaching the Top 10 on the Hot 100, and holding the #1 spot for 7 weeks on Billboard's R&B Singles chart. The B-side, "", charted on the R&B side, and introduced a more gospel element to Franklin's developing sound.

Her next single, "Respect", written and originally recorded by , firmly launched Franklin on the road to superstardom. Franklin's version of the song became her signature tune for life, reaching #1 on both the R&B "and" the Pop charts - holding the top spot on the former chart for a record 8 weeks - and helping her Atlantic debut album, "I Never Loved A Man The Way I Love You", reach status. In the next ten months, Franklin released a number of top ten hits including "Baby I Love You", "Chain of Fools" and "".

By the end of the 1960s, Franklin's position as "The Queen of Soul" was firmly established. Her albums were also hot sellers; one in particular, 1972's "Amazing Grace", eventually sold over two million US copies, becoming "the best-selling gospel album of all time". [Aretha's "best-selling gospel album" status was later surpassed by 's, .] Franklin's hit streak continued into the mid-1970s. 1973's emotional plea "Angel", produced by and written by Franklin's sister Carolyn, was a stand-out single that became yet another #1 on the R&B chart, although the subsequent album "" was not successful.

1974's gold-certified single "" hit #1 R&B and #3 on the Billboard Hot 100. By 1975, however, with the expanding exposure of and the popularity of fellow Atlantic artist , relations between Franklin and Atlantic Records were starting to strain. As a result, Aretha was recording poor material such as 1975's listless "You" album, and her record sales declined dramatically. Franklin had peaked, and the music industry was moving on to younger black female singers such as , and .

In 1976, Franklin's -produced soundtrack of the film, "Sparkle", briefly brought Franklin out of her funk. It was her first album to reach gold status since the landmark "Amazing Grace". The suggestive "(Giving Him) Something He Can Feel" became a number-one R&B smash and reached #28 on the Pop side. However, it was Aretha's "only" Pop Top 40 appearance during the second half of the 1970s. Her later period Atlantic albums including "Sweet Passion", "Almighty Fire" and "La Diva" were critical as well as sales failures and to top it off Franklin owed major debts to the for failure to pay back taxes. Her recording contract with Atlantic ran out at the end of 1979 and neither Aretha nor the company had any desire to renew it. On June 10, 1979, Franklin's father, the Rev. C.L. Franklin, was seriously wounded during what was said to be an attempted robbery at his Linwood Avenue home in Detroit, leaving him in a comatose state in which he remained until his death in the summer of 1984.

In 1980, Franklin's career was given a much-needed boost by a cameo performance as Mrs. Matt Murphy in "The Blues Brothers", singing "Think". That same year, signed Aretha to his . The singles "United Together" and "Love All The Hurt Away" - a duet with - returned her to the Top 10 on the Billboard R&B Singles chart. But it was the spectacular 1982 album, "", produced by longtime admirer , and the title-track single that gave Aretha her first R&B chart-topping and pop success since "". The album enjoyed a long run at #1 on Billboard's R&B Albums chart (even the "Zoomin"' album only reached #3). It won an American Music Award, was nominated for a Grammy and was certified gold in early 1983 - Aretha's first gold disc since the 1976 "Sparkle" album.

The following year Franklin and Vandross collaborated again on the disappointing "Get It Right". But in 1985, Franklin's sound was commercialized into a glossy pop sound as she experienced her first-ever "Platinum-certified" album, "". Yielding smash hits like the -influenced "" (#3 Pop/#1 R&B), the title track (#7 Pop/#2 R&B), and her duet with rock duo , "" (#18 Pop/#66 R&B), the album became the first Platinum certification of Aretha's entire career, introducing her sound to a younger generation of fans. In 1986, Franklin did nearly as well with an album simply titled "Aretha", which yielded her first number-one pop single in two decades with the duet, "". The album is noteworthy for the striking cover which was Andy Warhol's last work before his death. Other hits included her cover of ' "" and the -inspired "Jimmy Lee". When "Aretha" was taken out of print, it had sold over 900,000 US copies.

Aretha returned to gospel in 1987 with her album "One Lord, One Faith, One Baptism" which was recorded live at her New Bethel Baptist Church in Detroit. However, the disc was a far cry from her 1972 effort "Amazing Grace" and had middling sales. Follow-ups such as 1989's "Through The Storm" and 1991's "What You See Is What You Sweat" sold poorly and failed to produce any major mainstream hits - other than the former album's Elton John-featured title track - but her career got a slight boost in 1993 when she scored a dance-club hit with "Deeper Love" from the "Sister Act 2: Back In The Habit" soundtrack. In 1994, she scored another hit with the -produced ballad, "Willing To Forgive", which hit the Top 5 of Billboard's R&B chart and #26 on the Hot 100.

Franklin returned to prominence with her 1998 album, "". The album's mixture of urban contemporary, and soul was a departure from Franklin's previous material. The title track, produced by , gave her a smash hit on the R&B and Pop charts and earned a gold single while the album was certified gold also, the first time since 1986's "Aretha" that any of the singer's albums went gold. That same year, with less than twenty-four hours to prepare, Franklin stepped in for to sing "" at the 1998 Grammy Awards. (Pavarotti, who was awarded a Lifetime Achievement Award that night, was too sick to attend.) She gave a soulful and highly improvised performance in the aria's original key, while firmly stamping out the year with a captivating performance during 's "Divas Live" telecast.

Following the success of "", Franklin has continued recording if only sporadically. Her most recent full studio release was 2003's "So Damn Happy", which included the Grammy-winning track "Wonderful". Shortly after its release, Franklin left Arista Records after twenty-three years with the company. She has since started her own label, Aretha Records, and plans to issue her long-promised new album, "A Woman Falling Out Of Love" in 2008. She is also coaching young actors during auditions for a musical based on her autobiography, "From These Roots".

In 1998, Franklin also took again her role of Mrs. Murphy in "", this time singing her old hit "Respect". Like in the 1980 movie, she plays the possessive wife of the lead guitarist of the Blues Brothers Band, singing the song during a row with her husband about his joining his former band.

In 2007, released a duets compilation album entitled, "." The disc features duets performed with , , , , , , , , , , , Fantasia, and . A duet with has been recorded but it's not on the album. The album includes two new recordings with Fantasia, on the lead single "" and . The lead single "" hit radio on October 1, 2007 and became the number one most added song on radio the following week. The album also includes Aretha's historic rendition of "Nessun Dorma" from the 1998 Grammy telecast.

In 2008, Franklin was honored as "Person of the Year," two days prior to the , where she was awarded her 18th career Grammy.

Twice divorced, Franklin is the mother of four grown sons. Two of them, Kecalf and Teddy, are active in the music business. Teddy is the musical director and guitarist of Franklin's touring band. From 1961 to 1969, Aretha was married to her manager and co-writer Ted White. In 1978 she married "Cooley High" actor . While White had been a decade older than Aretha, Turman was four years younger. The marriage lasted until late 1982 when Franklin and her family returned permanently to Detroit. She and Turman divorced in early 1984.

She is the godmother of , who also grew up to be a pop star, rising to fame in the mid-1980s. A still image of Franklin was shown in the closing scene of Houston's 1985 video for the single .

* In 1985, then-Gov. James Blanchard of Michigan declared her voice “a natural resource” during a ceremony that marked her 25 years in show business
* On January 3, 1987, she became the first woman to be inducted into the .
* In May 1987, she was awarded an honorary Doctor of degree from the .Fact|date=February 2008
* In September, 1999, she was awarded The by President Clinton.
* In 2004, ranked her #9 on their list of the [http://www.rollingstone.com/news/story/5939214/the_immortals_the_first_fifty/ 100 Greatest Artists of All Time] . [cite web| title = The Immortals: The First Fifty| work = Rolling Stone Issue 946| publisher = Rolling Stone| url=http://www.rollingstone.com/news/story/5939214/the_immortals_the_first_fifty] To give perspective to this honor, only , , , , , , , and finished ahead of her on this list. finished at number ten, right behind Franklin.
* In 2005, she was awarded The by President George W. Bush.
* In 2005, she became the second woman (Madonna being the first, a founding member) to be inducted into the .
* On February 6, 2006, she performed, along with , the at
* On May 13, 2006, she was presented with an honorary degree by the .
* On April 1, 2007 Aretha sang "America the Beautiful" at Wrestlemania 23.
* On May 14, 2007, she was presented with an honorary Doctor of Music degree from the University of Pennsylvania.
* Is an honorary member of Sorority, Inc.
* She is the youngest recipient of a Honor.
* First black woman to appear on the cover of magazine.
* On February 8, 2008, Franklin was honored as "Person of the Year".
* On February 14, 2008, Franklin was given the Vanguard award at the NAACP Image awards.
* On May 4, 2008, Franklin was given the Key to the City of Memphis at the 2008 "Memphis in May International Music Festival" by Mayor Dr. Willie Herenton during her performance onstage
* On September 13, 2008, Franklin was ranked #19 on the "Billboard Hot 100 All-Time Top Artists" list by . [ [http://www.billboard.com/bbcom/specials/hot100/charts/top100-artists-20.shtml The Billboard Hot 100 All-Time Top Artists] ]

Franklin has won twenty Grammy Awards in total during her nearly half-century long career (she first charted in 1961), and holds the record for most Best Female R&B Vocal Performance award with eleven to her name (including eight consecutive awards from 1968 to 1975 - the first eight awarded in that category).