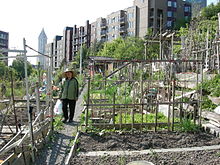 Allotment plots are allocated by preference to those aged over 65, residents of the International District and those whose income is below 30% of the median. The garden is managed by the Inter*Im Community Development Association.[2]