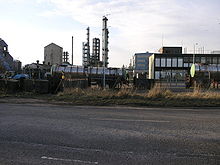 Coalite is a brand of low-temperature coke used as a smokeless fuel. The title refers to the residue left behind when coal is carbonised at 640 degrees Celsius. It was invented by Thomas Parker in 1904. In 1936 the Smoke Abatement Society awarded its inventor a posthumous gold medal.[1]

Coalite is darker and more friable than high temperature coke. It is easier to ignite, burns with an attractive flame, and is lighter than coal, making it an ideal fuel for open domestic firegrates. Drawbacks are its tendencies to produce an excessive residual ash, to burn quickly and give off sulphurous fumes.

Coal delivered by rail, first from the nearby Bolsover colliery, and later from other sources, was heated in 8 large air sealed ovens called "batteries".[2] Volatile constituents were driven off and condensed into coal oil and a watery fraction called ammoniacal liquor. Coal gas was used to heat the ovens and also burned in the works boilers and furnaces. Any excess was flared off. The coal oil and liquor were piped over the road to the chemical works section where they were processed into various fractions and industrial chemicals. The residual Coalite solid fuel was cooled, then sorted into various grades based on size and stockpiled for distribution by road transport.

Coalite was manufactured by the Low Temperature Carbonisation Company, which established a manufacturing plant at Buttermilk Lane, Bolsover, Derbyshire in 1936. At the time it was the largest one of its type in the world. Plants were also opened later in Askern and Rossington[3] near Doncaster and at Grimethorpe in South Yorkshire. The coal oil and liquor from these plants was processed at the central refinery at the Bolsover plant. The ovens continued producing Coalite until the Bolsover works closed down in 2004.

By 1939 the company was producing a low octane petrol called "Coalene" as well as diesel and other fuel oils. It continued to do so through the 2nd World War and into the early 60s. It supplied fuel to the RAF and Royal Navy during the war, allegedly keeping 12 squadrons flying and 2 battleships sailing.

In 1948 the company changed its name to the Coalite Chemical Company to reflect the diversified nature of the business.[4]

In 1956 after the introduction of the Clean Air Act 1956 Coalite was licensed as an "authorised fuel". Demand increased and the company expanded accordingly.

The Group consisted of several companies in the 1950-60s,[5] with a Francis L. Waring, F.Inst.F. as Managing Director of this group of companies;

In 1978 the company merged with the Charringtons Coke distribution company and with this they acquired the Falkland Islands Company.

In 1986 the group acquired Hargreaves Fuel distribution services. This marked the zenith of the company's fortunes. The group was now at its most diverse and widespread, owning subsidiaries that were totally unrelated to its core business. These included sheep farming, Dormobile camper vans, Builders merchants, Pyrometer Instrument manufacturers, vehicle sales and many others as well as industrial land across the country.

From 1990 to 1992 The company sponsored World class snooker tournaments

In 1997 The Falkland Islands subsidiary was floated off and became an independent company again.[9]

The solid fuel side of the business began to shrink in the 80s. There was falling demand for the product as cheaper natural gas gradually took over the domestic heating market. The Askern works closed in 1986 and Grimethorpe in 1994. From 1982 onwards there were several waves of redundancies.

As well as the reduced demand for solid fuel the slow demise of the company was accelerated after the Anglo takeover. During the 90s there were financial difficulties because the relatively small Anglo United had borrowed heavily from HSBC to buy the much larger Coalite group and had intended to service this debt by asset-stripping Coalite's many subsidiaries,[10] selling them off whilst retaining the core business of solid fuel production. The sell-off did not realise as much cash as was required and even a raid on the company pension fund did little to reduce the debt. Weighed down by this debt and with little money for investment the company declined as it faced outside competition in a downturned agrochemical market. It was making losses of £2 million p.a.in the late 90s. At the same time it was embroiled in legal actions concerning land and river pollution and the resulting adverse publicity affected the sales of its products.

In 2002 Anglo was bought by a consortium of local businessmen. Any viable assets were covertly (but legally) moved into separate subsidiaries under the Anglo holding company. The remaining debts were left with the much diminished Coalite Chemicals Ltd which went into administration and then receivership,[11] and finding no buyers, closed down finally in 2004, leaving a considerable number of redundant employees with much reduced pensions.[12]

Obtained from coal by pyrolysis

Obtained from Coal oil by distillation.

Obtained from Middle oil by solvent extraction and distillation.

Obtained from Ammoniacal liquor by solvent extraction, distillation and crystallisation.

Obtained from used tyres by pyrolysis

This final process might have saved the company. Successful trials with existing modified plant showed that large scale reclamation of useful products from used tyres was possible.[2] However it came too late to prevent financial collapse. This was attributed by the company to the delayed response of the regulating authorities in granting licenses for the sale of the tyre oil as fuel.

The company gained some notoriety as a manufacturer of the chemical, 245 trichlorophenol, a precursor of Agent Orange which was a defoliant used in the Vietnam war. An explosion in a pilot plant in 1968 had killed a chemist and spread dioxins over the debris. 79 employees contracted chloracne whilst cleaning up and even some of their families were affected by traces brought home on clothing.[13] There was more controversy when the company appeared reluctant to reveal the location of sites where the contaminated plant debris was buried and when the case notes of an independent investigator were mysteriously stolen from her home.

A specialised 245 unit was built soon after, with stringent controls and safety measures to prevent any future accidents but when the Seveso disaster in 1976 reawakened public concern over this issue, Ted Needham, the company chairman, deemed it expedient to close down this now uneconomical plant. The reluctance of his employees to work in it may also have influenced his decision.

Problems continued with dioxin emission from the works incinerator which burned residues from the chlorination plant. This caused further public protest and instigated official investigations that culminated in prosecution and a fine of £150,000 for contamination of the river Doe Lea and surrounding farmland in 1996.[9] The river attained the dubious distinction of being the most polluted in the world with regard to dioxins.

From 2005 onwards the Bolsover works were gradually demolished and the site is awaiting decontamination and eventual redevelopment.[14]