Dirt road is a common term for an unpaved road made from the native material of the land surface through which it passes, known to highway engineers as subgrade material. Dirt roads are suitable for vehicles; a narrower path for pedestrians, animals, and possibly small vehicles would be called a dirt track—the distinction is not well-defined. Unpaved roads with a harder surface made by the addition of material such as gravel and aggregate (stones), might be referred to as dirt roads in common usage but are distinguished as improved roads by highway engineers. (Improved unpaved roads include gravel roads, laterite roads, murram roads and macadamized roads).

Compared to a gravel road, a dirt road is not usually graded regularly to produce an enhanced camber to encourage rainwater to drain off the road, and drainage ditches at the sides may be absent. They are unlikely to have embankments through low-lying areas. This leads to greater waterlogging and erosion, and after heavy rain the road may be impassable even to off-road vehicles. For this reason, in some countries, such as Australia and New Zealand, they are known as dry-weather roads. 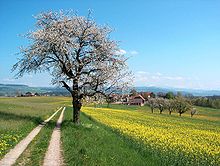 Dirt road in Switzerland for agricultural use.

Dirt roads take on different characteristics according to the soils and geology where they pass, and may be sandy, stony, rocky or have a bare earth surface, which could be extremely muddy and slippery when wet, and baked hard when dry. They are likely to become impassable after rain. They are common in rural areas of many countries, often very narrow and infrequently used, and are also found in metropolitan areas of many developing countries, where they may also be used as major highways and have considerable width.

Terms similar to dirt road are dry-weather road, earth road, or the "Class Four Highway" designation used in the People's Republic of China. A track, dirt track, or earth track would normally be similar but less suitable for larger vehicles. 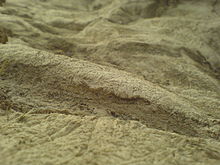 Detail of a dry, loamy road.

While most gravel roads are all-weather roads and can be used by ordinary cars, dirt roads may only be passable by trucks or four-wheel drive vehicles, especially in wet weather, or on rocky or very sandy sections. It is as easy to become bogged in sand as it is in mud; a high clearance under the vehicle may be required for rocky sections.

Driving on dirt roads requires great attention to variations in the surface and it is easier to lose control than on a gravel road. In addition to the hazards already mentioned, and potholes, ruts and ridges, problems associated with driving on gravel roads include: 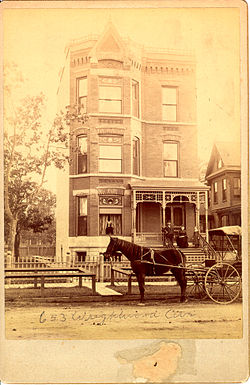 This is an 1880's photo of 653 W Wrightwood (now 655 W Wrightwood) in the Lincoln Park Neighborhood of Chicago, Illinois. Note the wooden sidewalk, dirt road and lack of buildings surrounding the edifice.