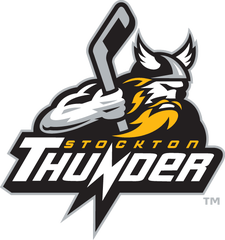 The Thunder relocated from , originally known as the . Prior to that, the franchise was known as the Birmingham Bulls, and originated in 1990 as the .

Since relocating to Stockton, two alumni have played in the NHL as of February 2008.

Stockton hosted to the "2008 ECHL All-Star Game" in January 2008. Three Stockton Thunder players were chosen to represent their team in the game; Ryan MacMurchy, Brad Farynuk, and Andy Contois.