Octane rating or octane number is a standard measure of the anti-knock properties (i.e. the performance) of a motor or aviation fuel. The higher the octane number, the more compression the fuel can withstand before detonating. In broad terms, fuels with a higher octane rating are used in high-compression engines that generally have higher performance.

Octane is a hydrocarbon liquid that is used as a reference standard to describe the tendency of gasoline, petrol, or benzin fuels to self ignite during compression prior to the desired position of the piston in the cylinder as appropriate for valve and ignition timing. The problem of premature ignition is referred to as pre-ignition and also as engine knock, which is a sound that is made when the fuel ignites too early in the compression stroke.

Severe knock causes severe engine damage, such as broken connecting rods, melted pistons, melted or broken valves and other components. The octane rating is a measure of how likely a gasoline or liquid petroleum fuel is to self ignite. The higher the number, the less likely an engine is to pre-ignite and suffer damage. 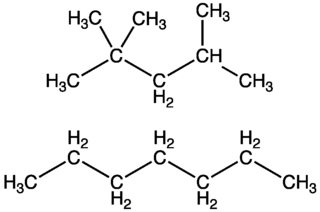 The most typically used engine management systems found in automobiles today monitor the level of knock that is being produced by the fuel being used. In modern computer controlled engines, the timing of the ignition will be automatically altered by the fuel management system to reduce the pre-ignition to an acceptable level.

The octane rating of gasoline is measured in a test engine and is defined by comparison with the mixture of 2,2,4-trimethylpentane (iso-octane) and heptane that would have the same anti-knocking capacity as the fuel under test: the percentage, by volume, of 2,2,4-trimethylpentane in that mixture is the octane number of the fuel. For example, petrol with the same knocking characteristics as a mixture of 90% iso-octane and 10% heptane would have an octane rating of 90.[1] A rating of 90 does not mean that the petrol contains just iso-octane and heptane in these proportions, but that it has the same detonation resistance properties. Because some fuels are more knock-resistant than iso-octane, the definition has been extended to allow for octane numbers higher than 100. 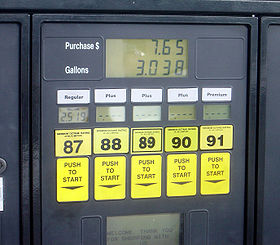 It is possible for a fuel to have a Research Octane Number (RON) greater than 100, because iso-octane is not the most knock-resistant substance available. Racing fuels, avgas, liquefied petroleum gas (LPG), and alcohol fuels such as methanol may have octane ratings of 110 or significantly higher. Typical "octane booster" gasoline additives include MTBE, ETBE, isooctane and toluene. Lead in the form of tetra-ethyl lead was once a common additive, but since the 1970s, its use in most of the industrialised world has been restricted, and its use is currently limited mostly to aviation gasoline.

The most common type of octane rating worldwide is the Research Octane Number (RON). RON is determined by running the fuel in a test engine with a variable compression ratio under controlled conditions, and comparing the results with those for mixtures of iso-octane and n-heptane.

There is another type of octane rating, called Motor Octane Number (MON), or the aviation lean octane rating, which is a better measure of how the fuel behaves when under load, as it is determined at 900 rpm engine speed, instead of the 600 rpm for RON.[2][3] MON testing uses a similar test engine to that used in RON testing, but with a preheated fuel mixture, higher engine speed, and variable ignition timing to further stress the fuel's knock resistance. Depending on the composition of the fuel, the MON of a modern gasoline will be about 8 to 10 points lower than the RON, however there is no direct link between RON and MON. Normally, fuel specifications require both a minimum RON and a minimum MON.[citation needed]

In most countries, including Australia and all of those in Europe, the "headline" octane rating shown on the pump is the RON, but in Canada, the United States and some other countries, like Brazil, the headline number is the average of the RON and the MON, called the Anti-Knock Index (AKI, and often written on pumps as (R+M)/2). It may also sometimes be called the Pump Octane Number (PON).

Difference between RON and AKI

Because of the 8 to 10 point difference noted above, the octane rating shown in the United States is 4 to 5 points lower than the rating shown elsewhere in the world for the same fuel. See the table in the following section for a comparison.

The final type of octane rating, called Observed Road Octane Number (RdON), is derived from testing gasolines in real world multi-cylinder engines, normally at wide open throttle. It was developed in the 1920s and is still reliable today. The original testing was done in cars on the road but as technology developed the testing was moved to chassis dynamometers with environmental controls to improve consistency.[4]

The RON/MON values of n-heptane and iso-octane are exactly 0 and 100, respectively, by the definition of octane rating. The following table lists octane ratings for various other fuels.[5][6]

*Hydrogen does not fit well into the normal definitions of octane number. It has a very high RON and a low MON,[16] so that it has low knock resistance in practice,[17] due to its low ignition energy (primarily due to its low dissociation energy) and extremely high flame speed. These traits are highly desirable in rocket engines, but undesirable in Otto-cycle engines. However, as a minor blending component (e.g. in a bi-fuel vehicle), hydrogen raises overall knock resistance. Flame speed is limited by the rest of the component species; hydrogen may reduce knock because of its high thermal conductivity.[citation needed]

It might seem odd that fuels with higher octane ratings are used in more powerful engines, since such fuels ignite less easily. However, detonation is undesirable in a spark ignition engine, and is signified by audible "pinging" or in more extreme cases "knock".

A fuel with a higher octane rating can be burnt in an engine with a high compression ratio without causing detonation, as such fuels are less prone to detonation. Compression is directly related to power and to thermodynamic efficiency (see engine tuning), so engines that require a higher octane fuel usually develop more motive power and therefore do more work in relation to the calorific value of the fuel (BTU) being used. Power output is a function of the properties of the fuel used, as well as the design of the engine itself, and is related to octane rating of the fuel. Power is limited by the maximum amount of fuel-air mixture that can be brought into the combustion chamber. When the throttle is partly open, only a small fraction of the total available power is produced because the manifold is operating at pressures far below that of the external atmosphere (depression). In this case, the octane requirement is far lower than when the throttle is opened fully and the manifold pressure increases to almost that of the external atmosphere, or higher in the case of forced induction engines (See supercharged or turbocharged engines).

Many high-performance engines are designed to operate with a high maximum compression, and thus demand fuels of higher octane. A common misconception is that power output or fuel efficiency can be improved by burning fuel of higher octane than that specified by the engine manufacturer. The power output of an engine depends in part on the energy density of the fuel being burnt. Fuels of different octane ratings may have similar densities, but because switching to a higher octane fuel does not add more hydrocarbon content or oxygen, the engine cannot develop more power.

However, burning fuel with a lower octane rating than that for which the engine is designed often results in a reduction of power output and efficiency. Many modern engines are equipped with a knock sensor (a small piezoelectric microphone), which sends a signal to the engine control unit, which in turn retards the ignition timing when detonation is detected. Retarding the ignition timing reduces the tendency of the fuel-air mixture to detonate, but also reduces power output and fuel efficiency. Because of this, under conditions of high load and high temperature, a given engine may have a more consistent power output with a higher octane fuel, as such fuels are less prone to detonation. Some modern high performance engines are actually optimized for higher than pump premium (93 AKI in the US). The 2001 - 2007 BMW M3 with the S54 engine is one such car. Car and Driver magazine tested a car using a dynamometer, and found that the power output increased as the AKI was increased up to approximately 96 AKI.

Most fuel filling stations have two storage tanks (even those offering 3 or 4 octane levels): those motorists who purchase intermediate grade fuels are given a mixture of higher and lower octane fuels. "Premium" grade is fuel of higher octane, and the minimum grade sold is fuel of lower octane. Purchasing 91 octane fuel (where offered) simply means that more fuel of higher octane is blended with commensurately less fuel of lower octane, than when purchasing a lower grade. The detergents and other additives in the fuel are often, but not always, identical.

The octane rating was developed by chemist Russell Marker at the Ethyl Corporation in 1926. The selection of n-heptane as the zero point of the scale was due to its availability in high purity. Other isomers of heptane produced from crude oil have greatly different ratings.

The selection of octane ratings available at the pump can vary greatly from region to region.

Octane ratings of some hydrocarbons