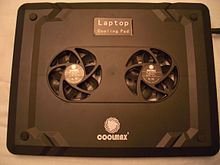 A laptop/notebook cooler, cooler pad or chill mat is an accessory for laptop computers that helps reduce their operating temperature. Normally used when the laptop's fan device is unable to sufficiently cool the laptop, a cooling pad may house active or passive cooling methods and rests beneath the laptop. Active coolers move air or liquid to direct heat away from the laptop quickly, while passive methods may rely on thermally conductive materials or increasing passive airflow.

Many cooler pads support the use of a power adapter. They typically run on power drawn through one of the laptop's USB ports. Many cooler pads therefore compensate with a built-in USB hub.

Some of these "powered" coolers are designed to draw heat from the underside of the computer; others work in the opposite way by blowing cool air towards the machine. The fan speed is adjusted manually or automatically on certain models and on others stays at a fixed speed.

The contribution of heat from the energy requirement of the cooler is very minimal impact as USB ports are limited to 2.5 watts of output power, whereas a laptop can easily consume 40 W of electrical power.

Just as there are advantages of having fans in a cooler - there are disadvantages as well. The power drawn by the cooler increases with the wear of the bearings or bushings, or when the vents of fan are blocked by dust, and as friction rises. When the friction becomes significant the power drawn by the cooler increases as well and there have been instances of USB port failures due to overdraw. In a situation like this, although the cooler may appear to work but it may be ineffective or counterproductive by leading to overheating of key components of the mainboard, in rare cases - leading to premature failure of the mainboard.[original research?]

Typically, a conductive cooling pad allows for the cooling of a laptop without using any power. These "Pads" are normally filled with an organic salt compound that allows them to absorb the heat from the laptop.[1] They are good for a limited amount of time from around 6–8 hours of cooling. Other designs are simply a pad that elevates the laptop so that the fans in the laptop are allowed greater airflow.

The conductive cooling pads are not advisable for laptops that have fan vents built into the bottom as the cooling pad blocks the vents leading to overheating or premature system failure. The best way to determine if a cooling pad would be suitable for your laptop would be to take a look at the bottom of the laptop and look for air vents or fan vents. If they are on the side and not on the bottom, it is usually safe to use the cooler pad otherwise not.

The other variety that can be used simply as a hard resting surface that provides gap between the cooler and the laptop is normally safer to use. The disadvantages of using these are - they are usually bulky, have to be carried around and sometimes they are too big or too small for a laptop so a bit cumbersome to use.

A Type of Passive Cooler that allows both airflow between the laptop base and cooler, as well as, between the base of the Cooler and Users's lap. These laptop coolers are well suited to laptops that have vents on its base because it prevents these vents from being blocked regardless of what ever surface the laptop is used on. Therefore, these Multi-Surface Coolers are suitable for use on desk, lap and uneven/soft surfaces (couch, bed/duvet, carpet) and the outdoors.

Recent advancements have brought forward coolers that are multipurpose. Features include card readers for various forms of media such as keydrives, memory cards, and 2.5" Laptop hard disk drives. In addition to the above coolers that are a combination of mini work desk with fans are a convenient addition to users that want to use the laptop on a bed or a couch - although they tend to be too heavy and bulky to be carried conveniently everywhere, limiting mobility.

One variant is a cooler with writing pad having an area meant to be used for placing a book or a writing pad – designed with students in mind although the bigger size limits its mobility and the weight usually results in tired legs for the user when used for a prolonged period of time. A recent addition to the above is an attachable laptop cooler and a comfort pad built into one.

As the laptop gets more powerful and faster it generates more heat. Manufacturers are trying to embed newer technologies to reduce heat generation, improve efficiency, and lower power consumption, which will one day eliminate the use of these devices.[citation needed] But if manufacturers make smaller and thinner laptops that house higher speed components, then laptops may only be comfortable to use with cooler pads to protect from toasted skin syndrome.[2][3]