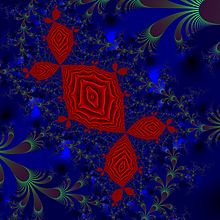 Douady rabbit in an exponential family 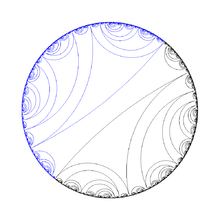 Quaternion julia set with parameters c = −0,123 + 0.745i and with a cross-section in the XY plane. The "Douady Rabbit" julia set is visible in the cross section

The Douady rabbit, named for the French mathematician Adrien Douady, is any of various particular filled Julia sets associated with the c near the center period 3 buds of Mandelbrot set for complex quadratic map.

Forms of the complex quadratic map

There are two common forms for the complex quadratic map

. The first, also called the complex logistic map, is written as

and the parameters γ and μ are related by the equations

Note that μ is invariant under the substitution

There are two planes associated with

. One of these, the z (or w) plane, will be called the mapping plane, since

sends this plane into itself. The other, the γ (or μ) plane, will be called the control plane.

depends on where γ (or μ) is in the control plane. The filled Julia set consists of all points in the mapping plane whose images remain bounded under indefinitely repeated applications of

. The Mandelbrot set consists of those points in the control plane such that the associated filled Julia set in the mapping plane is connected.

The Douady rabbit is most easily described in terms of the Mandelbrot set as shown in Figure 1. In this figure, the Mandelbrot set, at least when viewed from a distance, appears as two back-to-back unit discs with sprouts. Consider the sprouts at the one- and five-o'clock positions on the right disk or the sprouts at the seven- and eleven-o'clock positions on the left disk. When γ is within one of these four sprouts, the associated filled Julia set in the mapping plane is a Douady rabbit. For these values of γ, it can be shown that

has z = 0 and one other point as unstable (repelling) fixed points, and

as an attracting fixed point. Moreover, the map

, respectively. The white points lie in the basin

on these fixed points is given by the relations

Corresponding to these relations there are the results

Note the marvelous fractal structure at the basin boundaries.

As a second example, Figure 4 shows a Douady rabbit when γ = 2 − γD = − .55268 + .959456i, a point in the eleven-o'clock sprout on the left disk. (As noted earlier, μ is invariant under this transformation.) The rabbit now sits more symmetrically on the page. The period-three fixed points are located at

The repelling fixed points of

on points near the origin consists of a counterclockwise rotation about the origin of arg(γ), or very nearly

* Dragt, A. http://www.physics.umd.edu/dsat/dsatliemethods.html. Lie Methods for Nonlinear Dynamics with Applications to Accelerator Physics.

This article incorporates material from Douady Rabbit on PlanetMath, which is licensed under the Creative Commons Attribution/Share-Alike License.