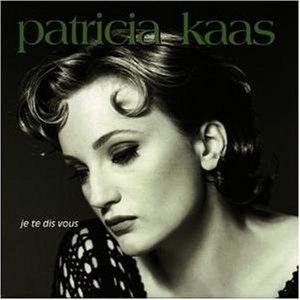 "Je te dis vous" (Eng (approx.): "I told you") is the name of an album recorded by the French singer . It was released in 1993 and achieved a huge success in many countries.

The name of the album is incorrect in French-language because it used both the pronouns "Tu" and "Vous" (In French-language, "Tu" is used when we are familiar with somebody, although "Vous" is used as a formal pronoun to address someone politely that the speaker does not know well.)

The album was produced in 's Eel Pie Studio in , by , who had already worked for Sade and the . In the U.S. and it appeared under the name of "Tour de charme" (not to be confused with the live album of the same name).

The songs "Je te dis vous", "Je retiens mon souffle" and "Fatiguée d'attendre" were not written by Kaas, but were based on an idea of her, as indicated in the album's booklet.

On the album Kaas sang her first song in German: the song "Ganz und gar" (Eng: "Absolutely") came from the pen of the German singer and songwriter . The album also featured three tracks in English, including a cover of the number "It's a Man's World". The British rock musician accompanied Kaas on the tracks "Out of the Rain" and "Ceux qui n'ont rien" (Eng: "Those who have nothing") on guitar.

The album was supported by a tour in 1994 and recorded in a live version on the 1995 album "Tour de charme".

In , there were two successful singles from this album : "Entrer dans la lumière" (Eng: "Come into the light"), written by , and "" (Eng: "He tells me I'm beautiful"), composed by under the pseudonym of Sam Brewski. With the latter, Kaas achieved her second top five single in France. A remix of "Reste sur moi" (Eng: "Stay on me"), a song composed by , reached the top 20 of the U.S. dance charts.

This album marked the definitive breakthrough of the singer in the international music scene, selling three million copies in 47 countries. Currently "Je te dis vous" is considered one of the best albums of modern [ [http://www.musicline.de/ Musicline.de] (Retrieved , )] , displaying the key qualities of the genre.

"Je te dis vous" is currently Kaas' most successful album in the German-speaking world, only just missing out on the German top 10 (it spent two weeks at 11th place), but spending 36 weeks in the top 100.

In Switzerland, Kaas's album featured on the chart (Top 40) for 25 weeks, from to , 1993. It debuted at #10 and climber to #2 two weeks later. It remained for two consecutive weeks at this position, but was unable to disloge 's album "". It appeard for 14 weeks in the top ten, then dropped slowly on the chart

The album had moderate success in the Netherlands. It featured for five weeks on the albums chart and went to #98 on , reaching its peak position, #83, two weeks later.