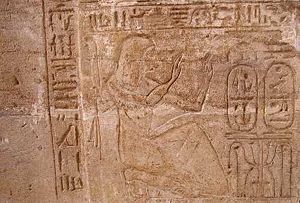 Chancellor Bay on the door jamb of the Amada temple, Nubia, shown adoring the cartouche of Siptah

Chancellor Bay (died 1192 BC) was an important Asiatic official in ancient Egypt, who rose to prominence and high office under Seti II Userkheperure Setepenre and later became an influential powerbroker in the closing stages of the 19th Dynasty. He is generally identified with Irsu[1] (alt. Arsu, Iarsu, Yarsu) mentioned in the Great Harris Papyrus,[2] although no contemporary source connects Bay with Irsu. The name Irsu can be read in Egyptian as 'the one who has made himself' or the "self made" man.[3] This was a derogatory method by the Ancient Egyptians to refer to Bay without mentioning his name.

Bay's importance is emphasized by the fact that he was given permission, possibly by Seti but more probably by Siptah, to construct his own tomb in Egypt's Valley of the Kings (KV13). His tomb was clearly constructed as part of a triad of tombs, including that of the Pharaoh Siptah and Queen Twosret. This was an unprecedented privilege, the likes of which were rarely accorded to a commoner, let alone a foreigner (though previous exceptions, such as that of Yuya, have occurred). It is possible that Bay was accorded this tomb because he was a relation of Siptah's mother, a Canaanite concubine of Seti II, or perhaps even of Amenmesse. His tomb was later usurped under the Twentieth Dynasty by prince Mentuherkhepshef, a son of Ramesses IX.

Bay/Irsu is called a Syrian (Hurru = Hurrian or Harran-born) Asiatic. While his precise background is unknown except for his Syrian origins, Bay is first attested as scribe and butler, an important position in Egypt, during the reign of Seti II.[4] However, Bay probably entered Egypt's civil administration earlier under a previous pharaoh–either Merneptah, Seti II's father, or Ramesses II.

Indeed, Bay's first official position may have been that of a priest in the temple at Heliopolis, where a small statue of him has been found. By the time of the death of Seti II, Bay had risen to the post of Chancellor and played the role of "kingmaker." Bay's status at Siptah's court was so great that on several of the young king's monuments, "the chancellor is shown in scenes with the pharaoh on the same scale as the latter, the earliest occasion in which a commoner was depicted in such a manner."[5] Furthermore, Bay explicitly claims, in several inscriptions with reference to Siptah, that it was he who established the king "on the throne of his father" without providing further details on how this came about.[6] Bay was also included in the cult of the mortuary temple of Siptah in Year 3 of the latter's reign.[7] During the same period the tomb of Queen Twosret, KV14 was also started, and built as part of a threesome with those of Siptah and Irsu/Bay. The tombs of Bay and Twosret (2nd building phase) are smaller copies of the royal tomb.

Images of Bay exist showing him standing behind the throne of Pharaoh Siptah, an unusual position for a commoner, and also opposite Twosret on the doorjamb of the Amada temple where he faces the queen. Tablets unearthed by excavators at Ras Shamra prove Ugarit was communicating with Bay of Egypt (RS 86.2230), who described himself the "head of the bodyguard of the Great King, the King of Egypt".

Like Siptah's and Twosret's, Bay's name was later removed from the tomb, probably by the new Pharaohs of the 20th Dynasty, who did not recognise his legitimacy, nor that of any of the late 19th Dynasty monarchs who ruled after Seti II, including Siptah and Amenmesse. Some even think that during this period Bay and Twosret were lovers, the chancellor encouraging her to take the throne as a full Pharaoh on the death of her stepson. If tradition is to be believed, Bay enjoyed an evil reputation: he reportedly seduced the pharaoh's widow, Twosret, who then gave him full control over Egypt's treasury.[8] But this speculation is unlikely, since Bay died in Siptah's Year 5, at least two years before Twosret assumed the throne.

While it was previously assumed that Bay served under Twosret and may even have attempted to usurp the throne on her demise,[9] a newly discovered ostracon published by Pierre Grandet in BIFAO 100 titled "L'execution du chancelier Bay O. IFAO 1864," (BIFAO 100 [2000]: pp. 339–345), reveals otherwise. According to the information in Ostraca IFAO 1864, which is composed of two inscribed potsherd fragments that were reunited in February 2000, Bay was executed on or shortly before Year 5, III Shemu day 27 of Siptah, on the king's orders. The recto of the ostracon is essentially a public announcement to the workmen of Deir el-Medina and reads thus:

Although the king is not named, the dating of the ostracon under Siptah is certain and accords well with Bay's last known public appearance in Regnal Year 4 of this king. It is not known what event or palace conspiracy brought about Bay's sudden downfall. However, the prime beneficiary of his death appears to be Twosret, who assumed the throne without opposition a year later when Siptah died. The intention of the public announcement was to tell the Deir el-Medina workmen to abandon all work on completing Bay's tomb. Bay, hence, was not buried in the dignified style which he sought and instead met a traitor's fate.[11] After his fall, his tomb was subsequently usurped in the 20th Dynasty for prince Mentuherkhepshef, a son of Rameses IX. [1]

Papyrus Harris I portrays his tenure in office as a time when Egypt was in chaos and temple offerings were denied to the gods.[12] After the death of Twosret, Egypt seems to have fallen into anarchy, with many temples being looted by Asiatic followers of Irsu/Bay.

Twosret's successor Setnakhte's Elephantine stele[13] records how he expelled these Asiatic rebels who, on their flight from Egypt, abandoned much of the gold, silver and copper which they had stolen from Egypt, and with which they had intended to hire reinforcements among the Asiatics. His pacification of Egypt is also referred to in the Great Harris Papyrus.[14]

It is possible that memories of these events were distortedly reported in the third century BCE by the Hellenistic Egyptian historian and priest, Manetho, who claimed that a certain Egyptian priest from Heliopolis called Osarseph, led leprous Asiatics out of Egypt, in an Exodus later reportedly that of Moses.