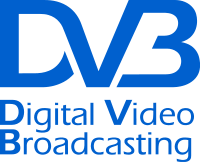 Digital Video Broadcasting (DVB) is a suite of internationally accepted open standards for digital television. DVB standards are maintained by the DVB Project, an international industry consortium with more than 270 members, and they are published by a Joint Technical Committee (JTC) of European Telecommunications Standards Institute (ETSI), European Committee for Electrotechnical Standardization (CENELEC) and European Broadcasting Union (EBU). The interaction of the DVB sub-standards is described in the DVB Cookbook.[1] Many aspects of DVB are patented, including elements of the MPEG video coding and audio coding.

DVB systems distribute data using a variety of approaches, including:

The DVB-T2 specification was approved by the DVB Steering Board in June 2008 and sent to ETSI for adoption as a formal standard. ETSI adopted the standard on September 9, 2009.[2]

The DVB-T2 standard gives more robust TV reception and increases the possible bit rate by over 30% for single transmitters (as in the UK) and should increase the max. bit rate by over 50% in large single-frequency networks (as in Germany, Sweden).

DVB has established a 3D TV group (CM-3DTV) to identify "what kind of 3D-TV solution does the market want and need, and how can DVB play an active part in the creation of that solution?". The CM-3DTV group held a DVB 3D-TV Kick-off Workshop in Geneva on January 25, 2010, followed by the first CM-3DTV meeting the next day.[3] DVB now defines a new standard for 3D video broadcast: DVB 3D-TV.

Older technologies such as teletext (DVB-TXT) and vertical blanking interval data (DVB-VBI) are also supported by the standards to ease conversion. However, for many applications more advanced alternatives like DVB-SUB for subtitling are available.

DVB is also developing a Content Protection and Copy Management system for protecting content after it has been received (DVB-CPCM), which is intended to allow flexible use of recorded content on a home network or beyond, while preventing unconstrained sharing on the Internet. DVB-CPCM has been the source of much controversy in the popular press and It is said that CPCM is the DVB's answer to the failed American Broadcast Flag.[4]

Recently, DVB has adopted a profile of the metadata defined by the TV-Anytime Forum (DVB-TVA, ETSI TS 102323). This is an XML Schema based technology and the DVB profile is tailored for enhanced Personal Digital Recorders. DVB lately also started an activity to develop a service for IPTV (DVB-IPI, ETSI TR 102033, ETSI TS 102034, ETSI TS 102814) which also includes metadata definitions for a broadband content guide (DVB-BCG, ETSI TS 102 539).

The DVB Multimedia Home Platform (DVB-MHP) defines a Java-based platform for the development of consumer video system applications. In addition to providing abstractions for many DVB and MPEG-2 concepts, it provides interfaces for other features like network card control, application download, and layered graphics.

DVB-S and DVB-C were ratified in 1994. DVB-T was ratified in early 1997. The first commercial DVB-T broadcasts were performed by the United Kingdom's Digital TV Group in late 1998. In 2003 Berlin, Germany was the first area to completely stop broadcasting analog TV signals. Many European countries aim to be fully covered with digital television by 2010 and switch off PAL/SECAM services by then.

As of 2005, DVB-T television sets are not significantly more expensive than analog television sets. Most popular in Europe are the set-top boxes that enable DVB-T to be received through an ordinary analogue television, with the price dropping remarkably in 2007.

In its origin Europe, in Australia, South Africa and India DVB is used throughout the areas it covers or is at least decided to be. This also holds true for cable and satellite in most Asian, African and many South American countries. Many of these have not yet selected a format for digital terrestrial broadcasts (DTTV) and a few (Canada, El Salvador, Honduras, Mexico, South Korea and the United States) chose ATSC instead of DVB-T.

DVB-T broadcasts were launched by the President of Kenya, Mwai Kibaki on the 9th of December 2009. Broadcasts are using H.264, with the University of Nairobi supplying the decoders. Kenya has also been broadcasting DVB-H since July 2009, available on selected Nokia and ZTE handsets on the Safaricom network.[5]

In late 2010 the South African cabinet endorsed a decision by a Southern African Development Community (SADEC) task team to adopt the DVB-T2 standard.[6]

In Hong Kong, several cable TV operators such as TVB Pay Vision and Cable TV have already started using DVB-S or DVB-C. The government however has adopted the DMB-T/H standard, developed in mainland China, for its digital terrestrial broadcasting services which has started since 31 December 2007.[7]

DVB-T broadcasts using H.264 commenced in Israel in July 2009. Analog broadcasts will be turned off 18 months after the start of DVB-T transmission. On 1 June 2009 the broadcast trial started and the launch will be on 1 August 2009.

During 2010, DVB-T broadcasts have become widely available in most of Israel and an EPG was added to the broadcasts. [8]

With the exception of SKY PerfecTV!, Japan uses different formats in all areas (ISDB), which are however quite similar to their DVB counterparts. SkyPerfect is a satellite provider using DVB on their 124 and 128 degrees east satellites. Their satellite at 110 degrees east does not use DVB, however.

In Malaysia, a new Pay-TV station MiTV began service in September 2005 using DVB-IPTV technology while lone satellite programming provider ASTRO has been transmitting in DVB-S since its inception in 1996. Free-to-air DVB-T trials began in late 2006 with a simulcast of both TV1 and TV2 plus a new channel called RTM3/RTMi. In April 2007, RTM announced that the outcome of the test is favourable and expects DVB-T to go public by the end of 2007. However, the system did not go public as planned. As of 2008, the trial digital line-up has expanded to include a Music Television channel called Muzik Aktif, and a Sports channel called Arena, with a news channel called Berita Aktif planned for inclusion in the extended trials soon. Also, High Definition trials were performed during the Beijing Olympics and the outcome was also favourable. It has been announced that the system will go public sometime in 2009.

As of 2009, MiTV has closed down, changed its name to U-Television, and announced that they are changing to use scrambled DVB-T upon relaunch instead of the DVB-IPTV system used prior to shutting down.

Analogue shut-off date is also announced to be sometime in 2015.

In the Philippines, DVB-S and DVB-S2 are the two broadcast standards currently used by satellite companies, while DVB-C is also used by some cable companies. The government adopted DVB-T on November 2006 for digital terrestrial broadcasting but a year later, they will consider other standards to replace DVB-T. The country has chosen the ISDB-T system instead of DVB-T.

In Denmark, DVB-T replaced the analog transmission system for TV on November 1, 2009. Danish national digital TV transmission has been outsourced to the company Boxer TV A/S (Boxer TV), acting as gatekeeper organization for terrestrial TV transmission in Denmark.[9][10] However, there are still several free channels from DR, and a few from TV 2.

In the Netherlands, DVB broadcasting started April 2003, and analog broadcasting was switched off December 2006. It was initially marketed by Digitenne but later by KPN. Bouquet 1 contains the following unencrypted national tv-channels: Nederland 1, 2, 3 and a regional channel. Bouquets 2~5 have the other encrypted commercial and international channels. Bouquet 1 also broadcasts the radio channels: Radio 1, Radio 2, 3 FM, Radio 4, Radio 5, Radio 6, Concertzender, FunX and also a regional channel. As of June 2011 the Dutch DVB-T service has 29 TV channels and 20 radio channels (including free to air channels)

In Norway, DVB-T broadcasting is marketed under RiksTV (encrypted pay channels) and NRK (unencrypted public channels). DVB-T broadcasting via the terrestrial network began in November 2007, and has subsequently been rolled out one part of the country at a time. The Norwegian implementation of DVB-T is different from most others, as it uses H.264 with HE-AAC audio encoding, while most other countries have adapted the less recent MPEG-2 standard. Notably most DVB software for PC has problems with this, though in late 2007 compatible software was released, like DVBViewer using the libfaad2 library. Sony has released several HDTVs (Bravia W3000, X3000, X3500, E4000, V4500, W4000, W4500, X4500) that support Norway's DVB-T implementation without use of a separate set-top box, and Sagem ITD91 HD, Grundig DTR 8720 STBs are others.

Portugal follows the DVB-T implementation, using H.264 with AAC audio encoding. It is live since April 29, 2009 and the switch-off date for all analog signals is April 26, 2012.

In North America, DVB-S is often used in encoding and video compression of digital satellite communications alongside Hughes DSS. Unlike Motorola's DigiCipher 2 standard, DVB has a wider adoption in terms of the number of manufacturers of receivers. Cable operators either use DVB-C or OpenCable. Terrestrial HDTV broadcasts use ATSC digital encoding with 8VSB modulation instead of DVB-T's COFDM.

Canada, Mexico, El Salvador, Honduras and the United States have chosen ATSC instead of DVB-T.

Companies that manufacture a product which is compliant to one or more DVB standards have the option of registering a Declaration of Conformity for that product. Wherever the DVB trademark is used in relation to a product – be it a broadcast, a service, an application or equipment – the product must be registered with the DVB Project Office.