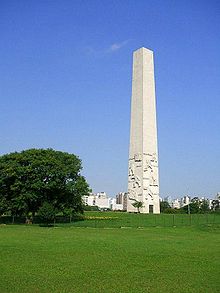 The obelisk is a project of the Italo-Brazilian sculptor Galileo Ugo Emendabili, who arrived at Brazil in 1923. The obelisk, made of pure travertino marble, was inaugurated on July 9, 1955, one year after the inauguration of Ibirapuera Park.