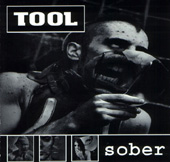 "Sober" is a song on Tool's first full-length album, "Undertow".

Tool guitarist Adam Jones has stated in an interview that the song is about a friend of the band whose artistic expression only comes out when he is under the influence. "A lot of people give him shit for that," Jones explains. "If you become addicted and a junkie, well, that's your fault." [ [http://toolshed.down.net/articles/text/gsch.mar.94.html citing Guitar School, March 1994] ]

"Sober" was one of the earliest songs composed by , with roots dating back to a 1987 live performance (released as "Peace Day" with his first band, ) in which the song was called "Burn About Out". The song contains some lyrics from the first verse of "Sober", with the same basic melody, although the melody is considerably faster and has an instrumental chorus.

The song was recorded by Keenan with Tool for the first time in mid-1991 on an untitled demo tape referred to as "72826".

A video for "Sober" was made in 1993. It was filmed using stop-motion animation, with characters' models designed by Adam Jones and directed by . The video bears a strong resemblance to the work of the , but they were not involved with its creation. It was the first of Tool's videos to be made in stop motion, the earlier promo video for "Hush" being live action and featuring all four band members. However, brief flashes of the musicians can be seen near the beginning, as well as a live-action figure twitching and vibrating violently ("à la" the film "Jacob's Ladder").

Its protagonist is a small, humanoid being, who lives and sleeps in a rusty room sparsely decorated with a bed, table and chair. He happens upon a wooden box, which he opens near the beginning. Its contents are kept hidden for the majority of the video's duration, but it seems whatever it is has had adverse effects - there are repeated shots of the humanoid levitating in his chair, and his head and arm vibrating wildly. While experiencing these effects, he ventures through his living quarters and its many corridors.

The climax provides a barrage of imagery and revelations: a figure attached to a wall behind a translucent screen, a sentry of sorts wielding a mobile, robotic cannon and a worm like, organic creature hidden within the house's pipes. At the end, the box is empty, leaving the viewer to determine its meaning.

*In August 2006 , lead guitarist of , joined Tool on stage while performing and 'jammed' together with the band at a show in .
*In January 2007, at the music festival in Auckland, New Zealand, frontman joined Tool for an improvisational version of the song.
* has released an acoustic cover version of "Sober" on their 2006 compilation "".
* did a "classical" cover of the song for the album "String Quartet to Tool." (They also have done albums covering other bands).

*In an episode of "", the eponymous duo provide commentary on the video. They mock the band's name, but give an otherwise positive review of the video.
*Electronic duo Orbital sampled the song in "Tootled", from their album "".