Morgan Pressel (born May 23, 1988) is an American professional golfer, currently playing on the LPGA Tour. She turned pro at age 17 and is the youngest-ever winner of a modern LPGA major championship. Pressel has reached as high as fourth in the world rankings.

Pressel was born in Tampa, Florida, to Mike Pressel and Kathy Krickstein Pressel. She attended Banyan Creek Elementary School, Omni Middle School, and graduated in 2006 from the Saint Andrew's School in Boca Raton, a private school affiliated with the Episcopal Church.[1] She has stated that her Jewish faith plays a large role in her life.[2]

Following her mother's death from breast cancer in September 2003, 15-year-old Pressel moved in with her grandparents Evelyn Krickstein and Dr. Herb Krickstein, a retired physician and pathologist who is her coach as well as her grandfather, while her two younger siblings stayed with their father. Pressel continues to live with her grandparents, who are the parents of former top-10 tennis player Aaron Krickstein, Pressel's uncle.[3] For the eldest Krickstein, this is the second time he has groomed a young athlete into a star. Aaron Krickstein holds the record for being the youngest player ever to win a men's professional tournament, in Tel Aviv in 1983.

In 2001, as a 12-year-old, she became the youngest player to qualify for the U.S. Women's Open. This record stood until 2007, when Alexis Thompson, another 12-year-old, beat the record by several months.

In 2005, at the age of 17, she was one of three co-leaders starting the final round of the U.S. Women's Open at Cherry Hills in suburban Denver. Pressel was tied for first on the 18th fairway when Birdie Kim holed out from the bunker just ahead to secure a one-stroke lead. Pressel then needed a birdie to tie, but made a bogey on the 18th to lose by two strokes. Her second-place finish gave her a share of the low amateur honors with Brittany Lang. Pressel played in a total of seven LPGA events in 2005 and made the cut in all of them, with an impressive scoring average of 70.96 in 28 rounds.[4]

In 2005, Pressel won the North and South Women's Amateur at Pinehurst, and the most important amateur event, the U.S. Women's Amateur. Pressel also finished her amateur career as 2005 Girls American Junior Golf Association (AJGA) Junior Player of the Year.

During her amateur career, she won 11 AJGA titles, including all five AJGA Invitationals: the "AJGA Slam".[5] 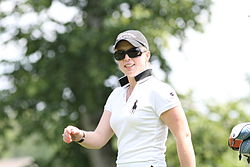 Pressel at the 2008 LPGA Championship

Pressel finished sixth in the first stage of the LPGA Qualifying Tournament in September 2005 and advanced to the final stage in December.[6] She turned professional in November, after appealing to the LPGA to become a member as a 17-year-old. LPGA rules state that members must be 18 years old.[1] At the five-round Final Qualifying Tournament in Daytona Beach, she finished tied for sixth to earn her tour card for 2006.[7] She played part-time on the tour until her high school graduation in May 2006.

Pressel made her first hole-in-one as a professional golfer on July 15, 2007, at the Jamie Farr Owens Corning Classic at Highland Meadows Golf Club in Sylvania, Ohio. It was a 152-yard (139 m) par 3 – hole 6 for the tournament. It was not enough to win, though; Se Ri Pak won the event for the fifth time.

She is represented by Wasserman Media Group and has endorsement deals with Callaway Golf, Polo Ralph Lauren, Royal Bank of Canada, and Audemars Piguet.

LPGA majors are shown in bold.