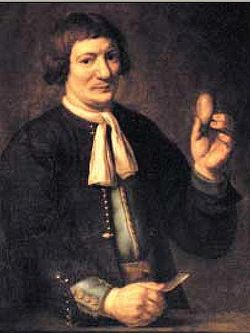 Illustration of the knife and kidney stone (publication 1740)

Jan de Doot is the subject of a painting from 1655 by Carel van Savoyen. It shows de Doot, a smith, holding in one hand a kitchen knife, and in the other a large bladder stone the size and shape of an egg, set in gold. This 17th century Dutch blacksmith is said to have performed a successful lithotomy on himself in 1651. The painting is part of the Portrait Collection of the Laboratory of Pathology, which is part of the University of Leiden.

The story on which the painting is based is from Nicolaes Tulp's book entitled Observationes medicae (1672 edition). In this book, which is a list of 231 'cases' from the Amsterdam practice of Dr. Tulp, the smith is named Joannes Lethaeus, which was a latinized version of de Doot's name (Doot means 'dead' in Dutch). It is not clear from the story if he lived long afterwards.

Here is the text:

Observations, Book IV, Chapter 31. Wherein a patient cuts a stone out of himself.

Doot apparently suffered from the intolerable pain that is caused by a bladder stone. According to date of the portrait, he survived at least until 5 years after the book came out, but 'Doot' could also mean dead.

Murphy doubts the details of the story. He points out that de Doot had previously had two stones removed from his bladder. Therefore the stone may have extruded through the former incisions into the subcutaneous tissue, from which it would have been far easier for de Doot to remove it.[2] 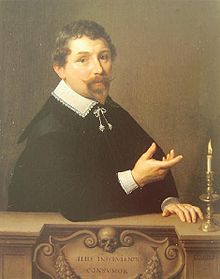