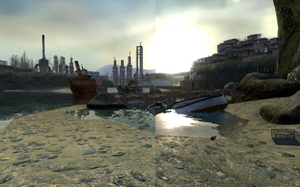 A comparison of the standard fixed-aperture rendering (left) with the HDR rendering (right) in the video game Half-Life 2: Lost Coast

The use of high dynamic range imaging (HDRI) in computer graphics was introduced by Greg Ward in 1985 with his open-source Radiance rendering and lighting simulation software which created the first file format to retain a high-dynamic-range image. HDRI languished for more than a decade, held back by limited computing power, storage, and capture methods. Not until recently has the technology to put HDRI into practical use been developed.[2][3]

In 1990, Nakame, et al., presented a lighting model for driving simulators that highlighted the need for high-dynamic-range processing in realistic simulations.[4]

In 1995, Greg Spencer presented Physically-based glare effects for digital images at SIGGRAPH, providing a quantitative model for flare and blooming in the human eye.[5]

In 1997 Paul Debevec presented Recovering high dynamic range radiance maps from photographs[6] at SIGGRAPH and the following year presented Rendering synthetic objects into real scenes.[7] These two papers laid the framework for creating HDR light probes of a location and then using this probe to light a rendered scene.

HDRI and HDRL (high-dynamic-range image-based lighting) have, ever since, been used in many situations in 3D scenes in which inserting a 3D object into a real environment requires the lightprobe data to provide realistic lighting solutions.

In gaming applications, Riven: The Sequel to Myst in 1997 used an HDRI postprocessing shader directly based on Spencer's paper[8]. After E³ 2003, Valve Software released a demo movie of their Source engine rendering a cityscape in a high dynamic range.[9] The term was not commonly used again until E³ 2004, where it gained much more attention when Valve Software announced Half-Life 2: Lost Coast and Epic Games showcased Unreal Engine 3, coupled with open-source engines such as OGRE 3D and open-source games like Nexuiz.

One of the primary advantages of HDR rendering is that details in a scene with a large contrast ratio are preserved. Without HDR, areas that are too dark are clipped to black and areas that are too bright are clipped to white. These are represented by the hardware as a floating point value of 0.0 and 1.0 for pure black and pure white, respectively.

The human eye can perceive scenes with a very high dynamic contrast ratio, around 1,000,000:1. Adaptation is achieved in part through adjustments of the iris and slow chemical changes, which take some time (e.g. the delay in being able to see when switching from bright lighting to pitch darkness). At any given time, the eye's static range is smaller, around 10,000:1. However, this is still generally higher than the static range achievable by most display technology.[citation needed]

Although many manufacturers claim very high numbers, plasma displays, LCD displays, and CRT displays can only deliver a fraction of the contrast ratio found in the real world, and these are usually measured under ideal conditions. The simultaneous contrast of real content under normal viewing conditions is significantly lower.

Some increase in dynamic range in LCD monitors can be achieved by automatically reducing the backlight for dark scenes (LG calls it Digital Fine Contrast, Samsung are quoting "dynamic contrast ratio"), or having an array of brighter and darker LED backlights (BrightSide Technologies – now part of Dolby, and Samsung in development).

Light blooming is the result of scattering in the human lens, which our brain interprets as a bright spot in a scene. For example, a bright light in the background will appear to bleed over onto objects in the foreground. This can be used to create an illusion to make the bright spot appear to be brighter than it really is.[5]

Flare is the diffraction of light in the human lens, resulting in "rays" of light emanating from small light sources, and can also result in some chromatic effects. It is most visible on point light sources because of their small visual angle.[5]

Otherwise, HDR rendering systems have to map the full dynamic range to what the eye would see in the rendered situation onto the capabilities of the device. This tone mapping is done relative to what the virtual scene camera sees, combined with several full screen effects, e.g. to simulate dust in the air which is lit by direct sunlight in a dark cavern, or the scattering in the eye.

Tone mapping and blooming shaders, can be used together help simulate these effects.

Tone mapping, in the context of graphics rendering, is a technique used to map colors from high dynamic range (in which lighting calculations are performed) to a lower dynamic range that matches the capabilities of the desired display device. Typically, the mapping is non-linear – it preserves enough range for dark colors and gradually limits the dynamic range for bright colors. This technique often produces visually appealing images with good overall detail and contrast. Various tone mapping operators exist, ranging from simple real-time methods used in computer games to more sophisticated techniques that attempt to imitate the perceptual response of the human visual system.

Currently HDRR has been prevalent in games, primarily for PCs, Microsoft's Xbox 360, and Sony's PlayStation 3. It has also been simulated on the PlayStation 2, GameCube, Xbox and Amiga systems. Sproing Interactive Media has announced that their new Athena game engine for the Wii will support HDRR, adding Wii to the list of systems that support it.

In desktop publishing and gaming, color values are often processed several times over. As this includes multiplication and division (which can accumulate rounding errors), it is useful to have the extended accuracy and range of 16 bit integer or 16 bit floating point formats. This is useful irrespective of the aforementioned limitations in some hardware.

Development of HDRR through DirectX

Before HDRR was fully developed and implemented, games may have attempted to enhance the contrast of a scene by exaggerating the final render's contrast (as seen in Need For Speed: Underground 2's "Enhanced contrast" setting) or using some other color correction method (such as in certain scenes in Metal Gear Solid 3: Snake Eater).

On December 24, 2002, Microsoft released a new version of DirectX. DirectX 9.0 introduced Shader Model 2.0, which offered one of the necessary components to enable rendering of high dynamic range images: lighting precision was not limited to just 8-bits. Although 8-bits was the minimum in applications, programmers could choose up to a maximum of 24 bits for lighting precision. However, all calculations were still integer-based. One of the first graphics cards to support DirectX 9.0 natively was ATI's Radeon 9700, though the effect wasn't programmed into games for years afterwards. On August 23, 2003, Microsoft updated DirectX to DirectX 9.0b, which enabled the Pixel Shader 2.x (Extended) profile for ATI's Radeon X series and NVIDIA's GeForce FX series of graphics processing units.

Shader Model 5.0 is a feature in DirectX 11, On Windows Vista and Windows 7, it allows 6:1 compression of HDR textures, without noticeable loss, which is prevalent on previous versions of DirectX HDR texture compression techniques.

Development of HDRR through OpenGL

It is possible to develop HDRR through GLSL shader starting from OpenGL 1.4 onwards.

This is a list of graphics processing units that may or can support HDRR. It is implied that because the minimum requirement for HDR rendering is Shader Model 2.0 (or in this case DirectX 9), any graphics card that supports Shader Model 2.0 can do HDR rendering. However, HDRR may greatly impact the performance of the software using it if the device is not sufficiently powerful.

With the release of the seventh generation video game consoles, and the decrease of price of capable graphics cards such as the GeForce 6, 7, and Radeon X1000 series, HDR rendering started to become a standard feature in many games in late 2006. Options may exist to turn the feature on or off, as it is stressful for graphics cards to process.

However, certain lighting styles may not benefit from HDR as much, for example, in games containing predominantly dark scenery (or, likewise, predominantly bright scenery), and thus such games may not include HDR in order to boost performance.