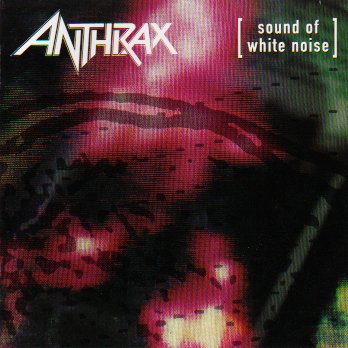 "Sound of White Noise" is the sixth studio album by American heavy metal band Anthrax, released in May of 1993 on . It is the band's the first album with former vocalist John Bush, and also their last studio album with guitarist .

The band and produced the album, which includes the singles, "Only" ,"", "Room for One More" and "Hy Pro Glo". This album marked a change in the sound of the band, mixing the old with new references (Dave Jerden was the producer of ) and the album got Anthrax's highest ever chart position, debuting at #7 on the charts, with "Only" and "Room For One More" in particular becoming major rock radio hits at their time. "Sound of White Noise" was certified gold by the RIAA.

Anthrax also contributed a song from these sessions called "Poison My Eyes" 7:05 to the soundtrack.

The closing of the album, which appears at the end of the song "This Is Not an Exit" includes a sample from the 1991 movie "My Girl".

A was produced for "Black Lodge", which features as the lead role in one of her first film appearances. The "Black Lodge" is a fictional place from the television series "", which "Twin Peaks"'s score conductor helped write.

This was released on LP in Europe (Catalog Number 7559-61430-1). The song "Black Lodge" was omitted from this vinyl release due to time.

The band gave an interview in Metal Edge Magazine before release about the influence of Bret Easton Ellis' "American Psycho" novel in making this album. The ending track "This Is Not an Exit" is directly from the novel.