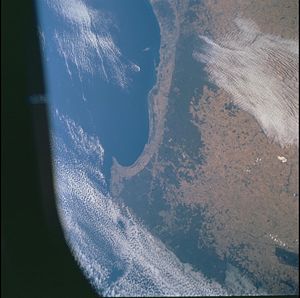 Southwest Western Australia from space. The dark green is dense vegetation on and above the scarp, which has been retained for forest reserve and water catchment purposes. The sharp vegetation boundary on the coastal side coincides with the edge of the scarp. 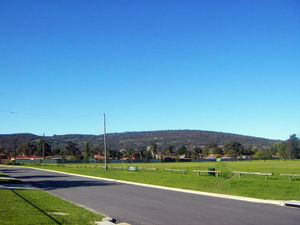 View of the Darling Scarp (background) from the Swan Coastal Plain

The Darling Scarp, also referred to as the Darling Range or Darling Ranges, is a low escarpment running north-south to the east of the Swan Coastal Plain and Perth, Western Australia. It extends generally north of Bindoon, to the south of Pemberton, and easterly to include Mount Bakewell near York and Mount Saddleback near Boddington.

The feature was first recorded as General Darling Range by Charles Fraser, Government Botanist with Captain James Stirling aboard HMS Success in March 1827.

Maps from the 1830s show the scarp labelled "General Darlings Range"; this later became Darling Range, a name by which the formation was still commonly known in the late 20th century, despite common understanding of it being an escarpment. There is also a tendency to identify the locations on or to the east of the scarp as being in the "Perth Hills" (or simply "The Hills").

The earliest traverses by British settlers in the Swan River Colony occurred in the 1830s. The best known of these is the expedition of Ensign Robert Dale, who appears to have gone from a point near Guildford, to the south side of Greenmount Hill and up through the Helena Valley.[1]

The Darling Scarp originated as the local expression, in the Perth area, of the extensive Darling Fault, a major and ancient geological discontinuity separating the Archaean Yilgarn Craton in the east from the younger Pinjarra Orogen and overlying Phanerozoic Perth Basin to the west. The Darling Fault is exposed for over 1,000 km, from the area east of Shark Bay, to the southern coast of Western Australia east of Albany. The location of the scarp must once have coincided with the location of the fault, but the scarp has since eroded about 15 kilometres eastwards. The original location of the scarp is indicated in places by an unusual landform known as the Ridge Hill Shelf.

The Archaean granites and gneisses of the Yilgarn Craton form the high ground of the Perth Hills and can be observed in road cuts, with good examples in the Mundaring Weir area. The only exposed sediments of the Perth Basin, west of the fault, are of Cenozoic age, and comprise the material such as sandy limestone, travertine and dune sand on which the city of Perth is built, including sand dunes of Pleistocene age formed during the last Ice Age.

This area is also a distinct physiographic section of the larger Yilgarn Block province, which in turn is part of the larger West Australian Shield division.

Also, in traditionally hot summers, strong easterly winds travelling across the scarp have presented serious issues for planes using the Perth Airport because of the alignment of the runways.[3] A documented accident in 1999 involving wind shear from the scarp is at the Perth Airport article. In addition, orographic uplift is produced when rainclouds move over the hills, giving higher rainfalls in settlements in the ranges compared with their coastal neighbours.

The Darling escarpment has been exploited for stone quarries, forestry and bauxite mining. Extensive timber railways and timber mills and the supporting communities existed along the escarpment because of the high quality jarrah forests.[4]

In the early twentieth century, most of the main rivers flowing off the escarpment had mainly been utilised for dams for water supply. The dams on the scarp, or slightly inland include: Mundaring Weir (on the Helena River), Serpentine Dam and Pipehead (Serpentine River), Wungong Dam, Churchman's Brook Dam, North Dandalup Dam, South Dandalup Dam (on the two Dandalup branches) and the Canning Dam (on the Canning River). The only free flowing water from the Darling Range in the Peel Region is the Dirk Brook in Keysbrook and the Murray River.

The scarp also defines the easternmost limit of the various aquifers present in the Perth Basin sediments, most notably the Southwest Yarragadee Aquifer. The scarp forms a divide between the hypersaline groundwaters typical of the Yilgarn Craton basement from the fresh ground waters of the Perth Basin. Some dams along the scarp are contaminated by seepage of saline water from the granite into the base of the dam's water column and must be periodically flushed to preserve water quality.

In the area where the Helena River emerges from its valley to the sandplain, there are still four quarries evident, despite being unused as quarries for fifty years or more. Mountain [5] and Stathams [6] quarries are now managed as rock climbing locations.

There have also been visible quarries on the scarp in the Gosnells and Herne Hill areas.

Legislative restrictions upon such developments were initiated in the late twentieth century to prevent further visible scars on the western face of the scarp.

In the late twentieth century, the proving of bauxite deposits correlating to the extensive jarrah forests saw wide ranging protests against the proposals to mine the forests. Campaign to Save Native Forests was one group to oppose the activity.

The lengthy process of protest forced the government and miners to check their original proposals, and wide ranging processes to guard segments of the jarrah forests from mining ensued.

The current mining activity in the region is extensive - the main mines being Huntly and Willowdale.[7]

Darling scarp from South West Highway between Armadale and Pinjarra

Perth Suburbs on the Scarp

The localities or suburbs on the 'edge' of the scarp are those that sit at its western edge, and in most cases command excellent views of the Swan Coastal Plain:

The suburbs to the south of Kalamunda are the locations of the main Perth Metropolitan television station transmission towers. There is also another site at Mount Lennard near Collie that Services the Southwest areas including Bunbury.

Also in the late twentieth century, dieback affecting jarrah timber in particular infected large tracts of the forest. Currently only the restriction of vehicle access has proved effective in slowing the spread of this disease. This gained greater acceptance and publicity through the decision to allow Rally Australia to operate along services roads provided that the vehicles had a thorough wash including the under carriage at the end of each stage.

In late 2004, the largest bushfire in the Northern Jarrah Forest for at least 100 years created significant issues for the forest as well. As a result of this fire intensity the Government increased the volume of controlled burns along the entire escarpment to reduce the build up of flammable materials.

In the early 2000s, Greenmount National Park and John Forrest National Park have been repeatedly burnt by bushfires - in most cases through suspected arson.

A network of reserves of crown lands on the escarpment have been connected into a regional park to maintain and conserve parts of the escarpment.

Following a change in 2005, the separate parks have been known as the 'Parks of the Darling Range' - and take up 23,948 hectares on the scarp.[9] Further in August 2008 the parks were given indigenous names [10]

Darling scarp from South West Highway between Armadale and Pinjarra