The tomb is thought to have initially been the last resting place of High Priest of Amun Pinedjem II, his wife Nesikhons and other close family members. Pinudjem II died around 969 BC in a time of decline of the Egyptian kingdom. In this time the mummies from former dynasties were vulnerable to grave robbery and were moved here to protect the remains of these royal personages.

The list of mummies in the tomb is as follows; 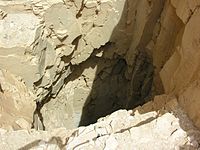 Initially the discovery of the tomb was concealed and a local family, the Abd el-Rasuls, used the mummies as a store of precious articles that were then sold on the antiquities market. This caused the local authorities to investigate and locate the source of these items.

It was cleared in a hurry (within 48 hours of its official discovery in 1881) by Émile Brugsch, in order to ensure no more antiquities were sold.

The chamber is reached by a nearly vertical chimney, which was left open in 1881, and has since filled with rocks and other debris (in fact every object that was left in the tomb has now been damaged in some way). It was reinvestigated in 1938. Since 1998 a Russian-German team led by Erhart Graefe has been working on reinvestigating and preserving the tomb.[3]