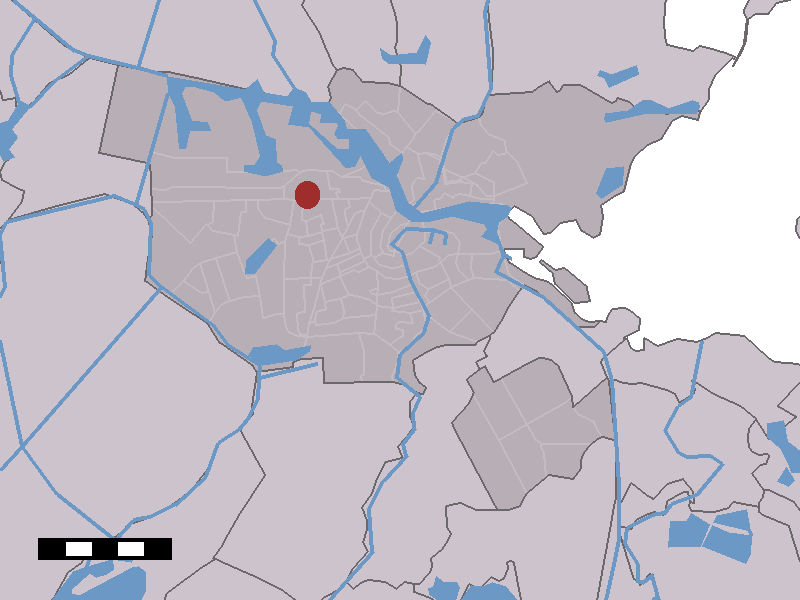 caption = Sloterdijk in the municipality of Amsterdam.

Sloterdijk (coord|52|23|N|4|51|E|type:city(100)) is a village in the Dutch province of . It is a part of the municipality of Amsterdam, and lies about 3 km northwest of the city centre.

Nearby is the site of railway station.

To protect the area around Sloten from the as-yet undrained IJ the was laid along the south bank of this inlet. In this vicinity at the same time, a dam on the Slochter (or Slooter) river was built, the Slooterdam. Trade grew in the vicinity, and in 1465 a weigh house (or waag) was established.A church was built in about 1479; however, it was destroyed in 1573 by the, a group of nobles rebelling against Spanish control of Holland, following the of . In the 17th century the Petruskerk (St. Peter’s Church) was built, which stands to this day.

The construction of the in 1631 brought new prosperity to the village, and a toll was placed along the towpath.

Industry grew around Sloterdijk in the 19th century. On , , the first train to operate in The Netherlands traveled from Sloterdijk to Haarlem. The new rail line between Amsterdam and Haarlem ran parallel to the Haarlemmertrekvaart, but for half a century the line passed through without stopping.

From 1882, steam-powered tram, and later horse-drawn trams ran to Amsterdam along the . This was the last horse-tram in Amsterdam, and it was electrified in 1916. An electric tram from Amsterdam to Haarlem and ran from 1904 to 1957.

The 1956 station was moved to the northwest in 1985, along a new rail spur to that had opened in 1983.Tram service also moved to the new station in 1985. The station was expanded to two levels in 1986 when the line was opened, and in 1997 the came to Sloterdijk. Since the 1960s, three new business areas have been laid out in the vicinity of the old village.

When Amsterdam was divided into boroughs, Sloterdijk became part of the new borough of . The business districts fell under the jurisdiction of .