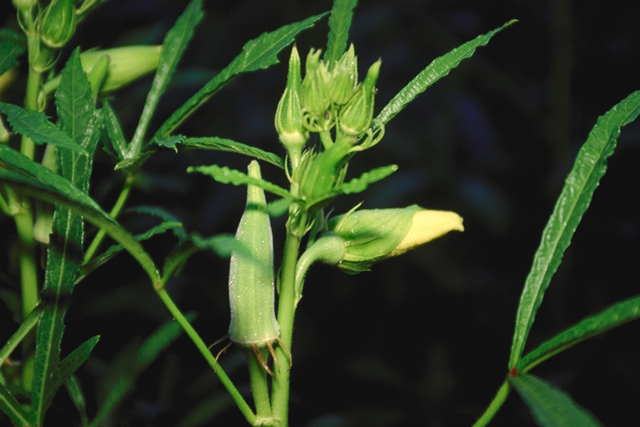 "Abelmoschus" is a genus of about fifteen species of s in the mallow family , native to tropical , and northern . It was formerly included within "", but is now classified as a distinct genus.

The genus comprises annual and perennial plants, growing to 2 m tall. The leaves are 10-40 cm long and broad, palmately lobed with 3-7 lobes, the lobes very variable in depth, from barely lobed, to cut almost to the base of the leaf. The s are 4-8 cm diameter, with five white to yellow petals, often with a red or purple spot at the base of each petal. The is a capsule, 5-20 cm long, containing numerous s.

"Abelmoschus" species are used as food plants by the e of some species including "Chionodes hibiscella" which has been recorded on "A. moschatus".

Several species are edible, with both the young seed pods and the young leaves being eaten as a . The most important commercially-grown species is .