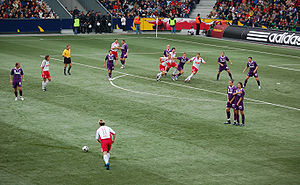 A direct free kick is a method of restarting play in a game of association football following a foul. Unlike an indirect free kick, a goal may be scored directly against the opposing side without the ball having first touched another player.

A direct free kick is awarded to the opposing team when a player commits a penalty foul, for example, pushing or tripping an opponent.[1] However, if the offence was committed by the defending team within their own penalty area, the kick becomes a penalty kick. 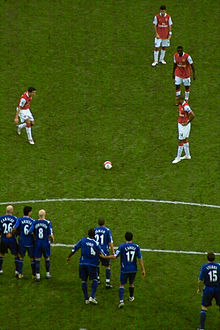 Often several players will line up for a free kick, so as to mask their intentions to the defending team.

The kick is taken from where the foul occurred, unless that was within the fouled team's goal area, in which case it may be taken from anywhere within the goal area. The ball must be stationary prior to being kicked. Opponents must remain 9.15 metres (10 yards) from the ball (and also outside of the penalty area if the kick is taken from within the defending team's penalty area) until the ball is in play. Observed the distance, the opposite players may choose to form a "wall" between the ball and the goal.

In order to keep the initiative a quick free kick is sometimes taken without waiting for the opposing players to retire from the 9.15 m (10 yard) radius.

The ball becomes in play as soon as it is kicked and moves, unless the kick was taken from within the kicking team's penalty area, in which case it is in play once it has passed directly beyond the penalty area.

There are three primary techniques used with direct free kicks. First, the player taking the direct free kick may blast the ball as hard as he can, usually with the laces of the boot. Alternatively, some players try to curl the ball around the keeper, with the inside of the boot. Additionally, certain free kick specialists will choose to kick the ball with minimal spin, making the ball behave unpredictably in the air. Free kick takers may also attempt to cross the ball to their centre backs or strikers in order to get a header on goal, especially if the position of the free kick is close to the wings.

Opposing players must retire the required distance as stated above. Failure to do so may constitute misconduct and be punished by a caution (yellow card). 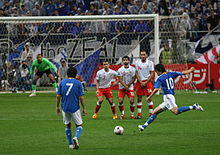 A defending team attempts to block the direct path to goal with a "wall" of players.

Most teams have one or two designated free kick takers, depending on the distance from goal and the side of the field the free kick is to be taken from. The strategy may be to score a goal directly from the free kick, or to use the free kick as the beginning of a set play leading towards a goal scoring opportunity.

Where there is a potential for a dangerous shot on goal to occur from a direct free kick often the defending side erects a "wall" of players standing side-by-side as a barrier to the shot. A kicker who has the skill to curl the ball around a wall is at a distinct advantage.

Another strategy for free kicks is to "knuckle" the ball by hitting it on the top of the foot so it will go over the wall then dip immediately towards goal. Footballers known for this style are Juninho, Cristiano Ronaldo, Nelinho, Sebastian Larsson, Didier Drogba and Keisuke Honda.