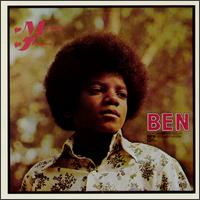 "Ben" was the second full-length solo album by American singer .

Released in August 1972, seven months after his auspicious debut as a soloist, the album featured more ballads than his debut.

The album sold on the strength of Jackson's first number-one pop single with the title track BEN (reached number one on Billboard single chart on August 5, 1972, selling over 1 million copies) and was named as the album title to help boost up album sales. None of the other songs from the album were issued as singles and one of the songs, "In Our Small Way", originally issued on "Got to Be There", was featured on this album.

The original release of Ben's cover art contained Michael and a large army of s near the bottom of the cover. However, Motown feared that the rats would scare some of the children from having their parents buy the album, and later pressings contained Michael without the rats. The original cover is now a rarity.