Gaylord Opryland Resort & Convention Center, formerly known as Opryland Hotel, is a large hotel and convention center located in Nashville, Tennessee and owned by Gaylord Hotels, a division of Gaylord Entertainment Company. It is the largest non-casino hotel in the Continental United States outside of Las Vegas.

The property, given a general theme toward "Southern hospitality", opened as The Opryland Hotel in 1977 adjacent to the Opryland USA theme park and the Grand Ole Opry house, from which the hotel took its name. The hotel originally featured 600 guest rooms, a 20,000-square-foot (1,900 m2) ballroom, and 30,000 square feet (2,800 m2) of convention space. Originally built by the National Life & Accident Insurance Company, Opryland Hotel was sold to then-Oklahoma City-based Gaylord Broadcasting Company (which soon after changed its name to Gaylord Entertainment Company) in 1982, along with most of National Life's entertainment properties, including WSM radio, Opryland USA, and the Grand Ole Opry. 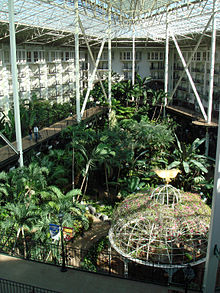 The Garden Conservatory atrium, the first of Opryland's large atriums

In 1983, six years after opening, Opryland Hotel completed its first major expansion, dubbed "Phase II". This large undertaking added 467 guest rooms, moving the total to 1,067. Phase II also brought 30,000 square feet (2,800 m2) more of ballroom space, and added the hotel's first signature atrium, the Garden Conservatory. Under large panes of glass and filled with plant life and fountains, the Garden Conservatory is designed to allow guests to experience a walk in a tropical garden without going outdoors. Hundreds of rooms have balconies overlooking the Conservatory. This was the first truly unique thing the hotel had to offer, and it set the stage for the next two expansions.

By 1988, Opryland Hotel had expanded to 1,891 guest rooms. In the "Phase III" expansion, another 18,000-square-foot (1,700 m2) ballroom was added along with the Cascades, a second atrium designed to complement the Garden Conservatory. The Cascades is covered by an acre of glass, and features thousands of plant species and large artificial waterfalls. As part of Phase III, but delayed by one year, another 4,000-square-foot (370 m2) ballroom opened, designed for more intimate settings and smaller functions.

Separate from the Phase III expansion was the addition of an 18 hole golf course, "Springhouse Golf Club", located 2 miles (3.2 km) east of the hotel. The par-72 links-style course was home to the BellSouth Senior Classic at Opryland on the Champions Tour from 1994 to 2003. It was renamed "Springhouse Links" in 2001, and then "Gaylord Springs" in 2006.

Opryland Hotel completed its "Phase IV" expansion in 1996. The $175-million "Delta" added 922 guest rooms, bringing the total to its current 2,881, and was the largest construction project in the history of Nashville at the time (it was eclipsed in 1999 by Adelphia Coliseum, now known as LP Field). Also part of the expansion, which more than doubled the size of the existing structure, was an additional 55,465-square-foot (5,152.9 m2) ballroom, a 289,000-square-foot (26,800 m2) exhibit hall, and the Delta Atrium. The 150-foot (46 m) tall, 4.5 acres (1.8 ha) atrium was given a Cajun theme, borrowing many elements from New Orleans, Louisiana. Also under the large glass roof is the Delta River, a 0.25 miles (0.40 km) artificial waterway. For a $9 fee, guests may ride in a "Delta Flatboat" through a guided tour of the atrium. When it was christened, water samples from more than 1,700 rivers throughout the world, including every registered river in the United States, were poured into the Delta River. 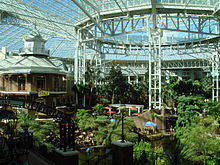 The Delta expansion solidified the trend that Gaylord was focusing more efforts on its hotel division than its theme park, as the massive undertaking swallowed up any and all land the theme park could have expanded upon. Indeed, following the 1997 season, the Opryland USA theme park ceased operations and was demolished. Simultaneously, Gaylord Entertainment announced a joint venture with the Mills Corporation for construction of the 12,000,000-square-foot (1,100,000 m2) Opry Mills shopping mall on the site. The park closure hurt occupancy rates at Opryland Hotel for the next five years. Gaylord Entertainment later divested its share of the mall and now leases the property and the "Opry" name to Simon Properties, the successor to Mills Corporation.

In the late 1990s, Gaylord Entertainment acquired the Ramada Inn on McGavock Pike, just across the street from Opryland Hotel. It was given a major renovation and dropped its Ramada affiliation to be known simply as "The Inn at Opryland". It is now affiliated with Radisson Hotels. This motel is marketed toward guests wishing to receive Opryland Hotel quality and amenities at economy prices. 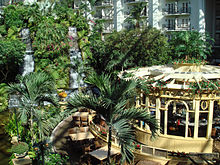 The waterfalls of the Cascades Atrium

On October 26, 2001, Opryland Hotel Nashville was rebranded as Gaylord Opryland Resort & Convention Center (or Gaylord Opryland, for short), taking its name from its corporate parent. Gaylord Entertainment made the change seeking to take the "Opryland" name off of the new property in Florida. The Opryland Hotels division was renamed "Gaylord Hotels", and the Florida property was given the name "Gaylord Palms." The Texas hotel was initially going to be called "Gaylord Opryland Texas", but was later changed to "Gaylord Texan", after more market research concluded it needed an identity of its own. The yet-to-be-opened Maryland property was renamed "Gaylord National." Company officials at the time stated that the "Opryland" branding was strong to Nashville (and Texas, initially), but didn't fit with projects in other parts of the United States. [3] Despite the rebranding effort, most locals (including the broadcast media) still refer to Gaylord Opryland as "Opryland Hotel."

In lieu of another expansion and as a result of the rebranding, the hotel underwent a $5 million renovation in 2003. With it came a refurbishment and rebranding of several of the hotel's restaurants and pubs, new retail establishments, and building improvements. Plans were also announced to renovate and refurnish all of the hotel's 2,881 guest rooms over the next few years.

According to a 2003 press release, Gaylord Opryland planned to build a 5,000-seat amphitheatre on the site in the near future, but those plans seem to have been abandoned in favor of a convention center expansion. [4]

On May 3, 2010 the entire Opryland Hotel complex and its surrounding campus—including Music Valley Drive and parts of Briley Parkway—was under 5-10 feet of floodwaters generated from the swollen Cumberland River, which jumped its banks after two days of torrential rainfall. Pictures from the inside of the hotel showed the Cascades restaurant area swamped with water and debris, as were the adjacent tropical gardens. Aerial shots confirm the entire complex, as well as the nearby Opry Mills Mall, was completely inundated by water. Gaylord's other riverfront properties—Springhouse Golf Course, and The Wildhorse Saloon—are also directly affected by the flooding Cumberland River. The golf course was completely underwater, and Wildhorse Saloon was partially flooded along First Avenue in downtown Nashville. (WKRN, WSMV, WTVF)

The Gaylord Opryland Hotel reopened its doors on November 15, 2010.

On February 12, 2007, Gaylord Hotels announced plans to expand Gaylord Opryland once again, this time focusing on the Convention Center. The $400 million expansion would have nearly doubled the size of the existing Convention Center and added a 400-room, stand-alone, all-suite hotel. A large parking garage would also have been added to the site. The expansion will be built on the south side of the existing structure, pushing the building more toward Opry Mills.

The plans hinged on $80 million in public financing through the Metro government that would be repaid through the property taxes generated by the expansion. The first step in this process would be getting the Tennessee General Assembly to designate the site a "special tourism development zone".

This expansion would have also made Gaylord Opryland the largest convention hotel outside of Las Vegas.[citation needed] It was expected to be completed by 2010,[5][dead link] but following the economic slowdown of 2008-2009 and the May 2010 flood, the plans are on indefinite hold.

Unlike its sister properties, Gaylord Opryland has no universal structure layout as a result of its continued expansion. Because of this, the property can be very confusing to navigate, even for frequent visitors. Employees are even said to get lost in the hotel from time to time.

Restaurants, Bars and other eateries

There are many varieties of places to eat and entertain throughout the property:

The convention center is divided into five areas: the Magnolia, Tennessee, Presidents, Governors, and Delta sections; each of which specializes in terms of rooms' size, and purposes. There are currently three levels in the convention center to accommodate the variation in height among the different ballrooms and exhibit halls.

While Gaylord Opryland caters largely to the out-of-town convention market, it serves a large purpose for the local community as well. Many local high schools use the ballroom space for their yearly proms. It is also known for being one of Nashville's hottest "first-date" spots because of its central location, restaurants, walkways, and scenery. Many local companies also take advantage of the Convention Center's abundant meeting space. Unlike most other non-casino hotels, a sizable portion of Gaylord Opryland's visitors are not actually guests of the hotel. The scenery of the various atria along with the various shops and dining options attract many walk-in visitors to the hotel every day.

Outside vendor Town Parke currently charges $18 to park automobiles at the hotel , but locals have found a way around this charge by parking at nearby Opry Mills free of charge and walking the short path to Gaylord Opryland. This is not recommended for overnight stays, both for lack of security and the risk of being towed. Valet parking service is also available to hotel guests for $25 a night.

During the months of November, December, and through mid-January of each year, Gaylord Opryland attracts thousands of visitors to see the large display of Christmas decorations, dubbed A Country Christmas. Millions of decorative lights are placed in the trees at the resort, and all three atria contain various decorations, including animatronics. The hotel begins installing lights in July of each year. In addition, several special holiday-themed shows and attractions take place, including ICE!, a display of ice sculptures, and the Radio City Rockettes Christmas Spectacular. During the Christmas seasons of 2007 and 2008, ICE! has had a theme of Dr. Seuss's How the Grinch Stole Christmas, The season of 2009 had a theme of A Charlie Brown Christmas, and 2010 had a theme of Santa Claus Is Comin' to Town. 2010 marked the 27th anniversary of Gaylord Opryland's A Country Christmas.