/dɒləˈmiːdiːz/) is a genus of large spiders of the family Pisauridae. They are also known as fishing spiders, raft spiders, dock spiders or wharf spiders. Almost all Dolomedes species are semi-aquatic, with the exception of the tree-dwelling D. albineus of the southwestern United States. Many species have a striking pale stripe down each side of the body.

They hunt by waiting at the edge of a pool or stream, then when they detect the ripples from prey, they run across the surface to subdue it using their foremost legs, which are tipped with small claws; like other spiders they then inject venom with their hollow jaws to kill and digest the prey. They mainly eat insects, but some larger species are able to catch small fish. They can also climb beneath the water, when they become encased in a silvery film of air.

There are over a hundred species of Dolomedes throughout the world; examples include Dolomedes aquaticus, a forest-stream species of New Zealand, the raft spider (D. fimbriatus), which lives in bogs in Europe, and the great raft spider (D. plantarius), which lives in fens, also in Europe. Many species are large, some with females up to 26 mm (1.0 in) long with a leg span of 80 mm (3.1 in).[1]

Dolomedes spiders are covered all over in short, velvety hairs which are unwettable (hydrophobic). This allows them to use surface tension to stand or run on the water, like pond skaters. They can also climb beneath the water, and then air becomes trapped in the body hairs and forms a thin film over the whole surface of the body and legs, giving them the appearance of fine polished silver. Like other spiders, Dolomedes breathe with book lungs beneath their abdomens, and these open into the air film, allowing the spiders to breathe while submerged. The trapped air makes them very buoyant and if they do not hold onto a rock or a plant stem they float to the surface where they pop onto the surface film, completely dry.

Like other spiders Dolomedes have eight eyes, but their sense of touch is more important when it comes to detecting prey by their vibrations on the surface of the water.

Rather than hunting on land or by waiting in a web, these spiders hunt on the water surface itself, preying on mayflies, other aquatic insects, and even small fish.[2][3] For fishing spiders, the water surface serves the same function as a web does for other spiders. They extend their legs onto the surface, feeling for vibrations given off by prey.

Fishing spider with its prey, a Cameroon Clawed Frog tadpole

Dolomedes are nocturnal hunters, feeding when birds, their main predators, are sleeping. The method they use to fish for insects is to hold on to the shore with their back legs while the rest of their body lies on the water, with legs stretched out. Dolomedes species tend to be robust with thickset legs that allow them to tackle prey larger than themselves. They stretch out their front legs and wait, as if listening. Their front legs feel the vibrations carried on the water, just as other spiders feel the vibrations in a web. They are able to tell what is causing the vibrations that the water is carrying - to distinguish the drawn-out, erratic vibrations of a struggling insect from the one-off vibrations caused by falling leaves or the background noise of the wind or the flow of the water around rocks and other obstacles. As well as identifying the source of the vibrations, the spiders are also able to discern the distance and direction to the source. To this end they have a range of vibration-detecting organs, including very sensitive hairs (trichobothria) on their legs and feet. Their eyes play a secondary role - experiments on related species show that touch is the main sense these spiders use to catch their prey. Their eyes are of little use for nocturnal hunting. These vibration detectors also serve to warn the spider of predators such as trout.

As soon as the vibrations reveal that there is a floundering insect within range, some fishing spiders may take direct action - they run at pace across the surface of the water and grab the insect before it extracts itself from the water and flies to safety. Some fishing spiders use silk draglines to prevent themselves from speeding past the prey.

A male shows the typical hunting stance of Dolomedes minor

One researcher, Michelle Greenwood, fed a large moth to a small juvenile fishing spider and observed its behaviour: "On my first fieldtrip I discovered the fun of hand feeding them. I caught a large moth and offered it, struggling in my fingers, to a relatively small juvenile fishing spider. The spider daintily took it, moved itself to dry land and proceeded to eat. I watched this process for almost half an hour; fascinated by the way the spider stood on the tips of its articulated legs and deftly manoeuvred the moth with its mouthparts. She then delicately cleaned all her legs, passing each between her fangs; carefully scraping them clean before wiping each front leg over her eyes." The spider then returned to the riverside to await further victims.

Fishing spiders' main prey is aquatic insects, but they are opportunistic feeders and will eat anything suitable that happens within range. Dolomedes in North America have been observed catching and eating small goldfish.[4]

The main predators of fishing spiders are birds and snakes. Dragonflies have also been observed catching young spiders. Species parasitic on the spiders include a wasp of the Pompilidae family that stings the spider to paralyse it before carrying it off and laying an egg in its abdomen. The larvae of the wasp hatch and proceed to eat the spider from the inside out. One escape technique the spiders use is to disappear beneath the surface tension of the water. However some wasps counter the disappearing trick by going into the water to sting the spider and drag them out of the water.

The North American species D. triton has been observed jumping to get away from an attacking frog. The researchers[who?] concluded that the spider's vibration-detecting hairs felt the rush of air as the frog lunged to attack.

Female fishing spiders are larger than the males. If a female chooses to eat a male after mating, there is usually little he can do about it. This behaviour may help the female by providing the nutrition she needs to produce healthy young, while the male gets the benefit of passing his genes on to a well-fed next generation.[citation needed]

Nine species of Dolomedes exist in North America. The six-spotted fishing spider (D. triton) lives primarily in small lakes and ponds. This spider consumes mostly water striders (pond skaters), but like all Dolomedes, it is an opportunistic ambush hunter that will eat anything that it can capture. Other species include the bog-dwelling D. striatus, and four species living by streams: D. scriptus, D. vittatus, D. gertschi and D. holti. Two North American species, D. tenebrosus and D. okefinokensis, exhibit female giganticism and/or male dwarfism, with their males being less than half the size of the females. The ninth species is the arboreal D. albineus.

Two Dolomedes species occur in Europe. The raft spider (D. fimbriatus) is widespread on the surface of bog pools and in boggy grassland. The great raft spider, (D. plantarius) lives in fens, and is listed as endangered in Great Britain and is globally vulnerable. 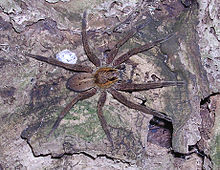 Four species occur in New Zealand. Two are widespread: the large Dolomedes aquaticus of open riverbanks, and another as yet undescribed species of similar size, specialising in forested riverbanks; this is known as Dolomedes III or the New Zealand forest fishing spider. The largest of the New Zealand species Dolomedes schauinslandi or Rangatira spider occurs in the Chatham Islands, where it occurs on rodent-free islands where running water is rare. The fourth species, D. minor, is also not restricted to rivers. Known as the Nursery Web Spider, it makes white nursery webs on shrubs, but is still capable of fishing behaviour.