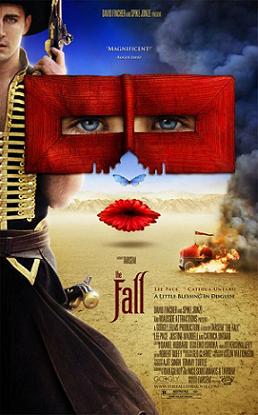 Roy Walker (Lee Pace), an early 20th century Hollywood stuntman, lands in the hospital after performing a dangerous stunt to impress his girlfriend. Distraught and suicidal after losing her, the bedridden Roy befriends a fellow patient, a young girl named Alexandria (Catinca Untaru). He enchants her with vivid, fantastical tales about six heroes &mdash; an Indian, an ex-slave named , an Italian explosives expert, , a mystic, and a masked bandit &mdash; who unite to fight a common enemy, Governor Odious. Although Roy has genuine affection for Alexandria, he also has an ulterior motive: by telling tales and gaining her trust, he tricks her into stealing from the hospital pharmacy so he can commit suicide.

As the line between fact and fantasy blurs, real-life people begin to populate Roy's fictitious stories. A hospital nurse (Justine Waddell) becomes the center of a romantic feud between Governor Odious and the masked bandit, who turns out to be Roy. Mesmerized by the epic, ever-changing story, Alexandria returns to the pharmacy to pilfer another bottle of morphine for Roy. While climbing on a ladder to reach the pills high on a shelf, she loses her footing and falls, injuring herself.

After surgery (depicted in an animated sequence like a similar surgery scene in ""), Alexandria is visited by Roy in the recovery room, where he consoles her and confesses his stories were a ruse to obtain morphine. Once they are fully recovered, Roy returns to work as a Hollywood stunt man and Alexandria returns to picking fruit with her family in the orange groves.

"The Fall" premiered at the . For its wide theatrical release in 2008, the film is presented by and .