This story had its origins in a planned Hartnell story by Hulke-Ellis called "The Big Store", in which aliens occupied mannequins in a busy department store, while waiting for human hosts to possess. The idea was adapted for the Troughton era and its setting changed to a metropolitan airport.

Filmed on location at . Heathrow also accepted the production team's offer, but the team chose Gatwick as the cost was lower. "Doctor Who" did film at Heathrow for "" in 1982.

was offered the chance to continue playing the character of Sam Briggs (who appears only in this story) as a new companion, but declined the offer. Collins guest-starred, years later, as Queen Victoria in "Tooth and Claw" (2006).

There is a fan myth that this was the first story to feature the Doctor's face in the opening credits (exact determination having been difficult due to the number of episodes missing from this era of the programme). In reality, it was "" that saw the debut of the new title sequence. However, the revised arrangement of the theme music that accompanied this new sequence made its debut in Episode 2 of "The Faceless Ones".

*Bernard Kay appears as Inspector Crossland.
*Wanda Ventham and Donald Pickering would later star as husband and wife in "".
*Christopher Tranchell would return as Leela's love interest Andred in "" and had previously appeared in the first Doctor serial "" as Roger Colbert.

Only Episodes one and three of this serial exist in the archives.

In addition to the complete version, the archives hold an incomplete print of episode one, returned from ABC in in the early 1980s. The Australian Film Censorship Board saw fit to remove the following scenes: Spencer killing Inspector Gascoigne with a Chameleon ray-gun; the alien arm emerging from the cupboard; and panning shots of the alien figure (seen only from behind) at the end of the episode. 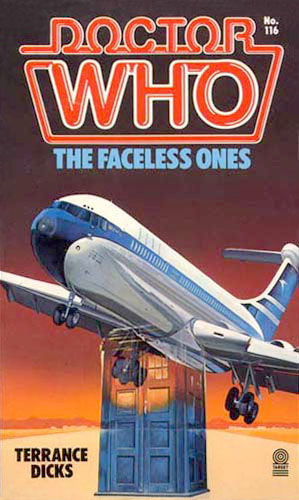 As with all missing episodes, off-air recordings of the soundtrack exist due to contemporary fan efforts. In February 2002 these were released on CD, accompanied by linking narration from Frazer Hines.

In 2003, Episodes one and three of this serial were the final "Doctor Who" episodes to be released on by . In November 2004, they were included in the three-disc "Lost in Time" DVD set.

Episode one was released on a free , included with as a promotional item. It was housed in a cardboard sleeve.

A novelisation of this serial, written by , was published by in December 1986.