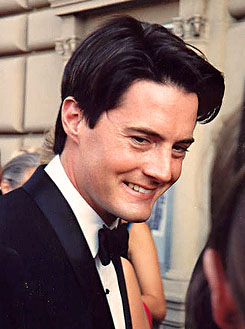 He is a graduate of the and moved to , to pursue his career soon after his 1982 graduation. He is best recalled for his roles as Jeffrey Beaumont in the "", and in Dune, as well as his television series roles as in "", Trey MacDougal in "" and in "".He is known for playing lead characters in several of director David Lynch's films.

MacLachlan has worked extensively with . He first appeared as in the film Dune, Lynch's adaptation of Frank Herbert's novel, and as in . Later he played Special Agent Dale Cooper in Lynch's ABC television series , reprising that role for Lynch's 1992 prequel . Lynch commented on those roles in a story about MacLachlan: "Kyle plays innocents who are interested in the mysteries of life. He's the person you trust enough to go into a strange world with." [fr [http://contrechamp.kaywa.com/20061011 Contrechamp.com, Voyages en cinéphilie. "L'homme sériel", November 10, 2006.] ]

In the 1993 film version of Franz Kafka's "The Trial", MacLachlan played the lead role of the persecuted Josef K. He also had a recurring role in the American television series "", portraying Dr. Trey MacDougal, the one-time husband of (). He portrayed the spirit of in "".

In 1995, MacLachlan starred in 's "Showgirls". The movie was heavily panned by critics [Metacritic, http://www.metacritic.com/video/titles/showgirls accessed May 22, 2008] and it collected seven (from a record thirteen nominations). MacLachlan himself was deeply embarrassed with his involvement and infamously walked out of the film's premiere,

MacLachlan has appeared in several plays, including John Kolvenbach's "On an Average Day" with , on Broadway in "" with , as well as in "Romeo and Juliet", and the Shakespearean history "Henry V".

In recent years, MacLachlan continues to play dark and/or morally ambiguous characters. This included a guest role on , in which he played a father who shot and killed a sociopathic child who murdered his son. After starring in the short-lived , MacLachlan has become a regular on . His character, the mysterious dentist , first appeared during the show's second season, with MacLachlan becoming a full-time cast member with the start of season three.

MacLachlan appeared in the 2008 movie, .

MacLachlan was born in , and graduated from . He lives in with his wife Desiree Gruber and their two small dogs (a and a Yorkie/ mix). Blaming it on "probably too much affection", [cite episode | series = Showbiz Tonight | network = CNN | date = 2006-01-20 | transcripturl = http://transcripts.cnn.com/TRANSCRIPTS/0601/20/sbt.01.html | title = Kyle MacLachlan's New Show] the couple have created a [http://www.mookieandsam.com/ website about their dogs] . Mookie and Sam also have a " [http://www.youtube.com/watch?v=lcU_u2EO0L8 hit web TV series] ". Mookie and Sam's eight videos have generated over 2 million YouTube hits and many video responses.

In the past, MacLachlan had longterm relationships with fellow co-stars (, , and ) from various projects directed by . He also had a 6-year relationship with former supermodel, . [cite web|url=http://www.whosdatedwho.com/celebrities/people/dating/kyle-maclachlan.htm | title=Kyle MacLachlan's Dating History|accessdate=2008-10-04|publisher= Who's Dated Who?]

Kyle's wife gave birth to a baby boy named Callum Lyon MacLachlan. He was born on July 25, in LA. The baby weighed in at 8 lbs. 6 oz.

Kyle has two younger brothers named Craig and Kent, both residing in the Pacific Northwest.