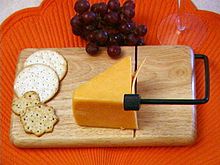 A cheese knife is a type of kitchen knife specialized for the cutting of cheese. Different cheeses require different knives, according primarily to hardness; most often "cheese knife" refers to a knife designed for soft cheese. Soft cheeses require a sharp knife. As these cheeses are often sticky, a cheese knife will be serrated and often have holes to prevent sticking.

Cheese knives are designed to deal with the stickiness of soft cheese. When the cheese does not stick to the blade, it allows for pieces of cheese to be presented more attractively, with crisper shapes compared to cheese cut with standard knives.

The blades of cheese knives are usually made of a material, such as stainless steel, which is resistant to the stickiness of cheese. Another design feature often found is the presence of holes in the blade to help to prevent the cheese from sticking to it.

Further, the shape is unusual. Most knives have a blade that is wide at the base and tapers to the tip. A cheese knife, on the other hand, is similar to a cleaver in that it starts out thinner at the handle and then gets wider away from the base.

The non-sticky characteristics of a cheese knife also makes them useful for cutting other sticky foods, such as cakes, eggs, and pies; compare also egg slicer.

Hard cheeses instead require a tough blade, which will not be damaged by the hard cheese. Exemplary is the distinctive Parmesan cheese knife, which is short, thick, and stubby, like an oyster knife.

Various non-knife devices are used for cutting cheese, such as a wire cheese cutter, which completely avoids adhesion, a cheese slicer, used primarily for thin slices of medium-hard cheeses, used especially in Scandinavia for cutting cheese for sandwiches, and the girolle, used to cut the hard Tête de Moine cheese by scraping. 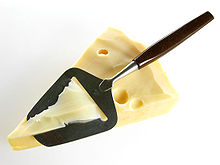 A modern cheese slicer was invented by Thor Bjørklund in 1925 in Norway.[1] The cheese slicer's mass production started in 1927. The design was based on the carpenter's plane. This style of slicer is very common in the Nordic countries, the Netherlands, Belgium, Germany, and Switzerland.

Cheese cutters are designed to cut soft, sticky cheeses (moist and oily), and accordingly does not have a large sharp-edged blade; compare to a cheese knife with holes in the blade. The cutting edge of cheese cutters are typically a fine gauge stainless steel or aluminum wire stretched across a supporting frame. The thin wire cuts through a cheese block with hand pressure.

This design was invented and patented in 1971 by a manufacturer in California. The original Prodyne Gourmet Cheese Slicer had a wooden board with a slot cut into it and a hole through which one end of a U-shaped steel cutting arm was inserted. In the patented design, a stainless steel wire extends between the two ends of the cutting arm fit into the slot, and cuts the cheese. The wire has loops at each end; one loop is around the steel cutting arm in the slot, while the other passes around a metal pin though a plastic handle on the other end of the cutting arm. The plastic handle rotates upward to tighten the wire, and is secured to the cutting arm with a screw.

The board-style cheese slicer has been expanded to include marble, stainless steel, and plastic cutting boards. Several other designs of handles and wire holders have also been invented to hold the cutting wires of cheese slicing boards. Many of these wires have loops on the ends like the Prodyne models; others have small rings or knots that fit into a slot on the handle and cutting arm.

This article is about the utensil. For the mushroom, see Cantharellus. 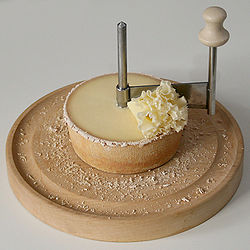 The Girolle is a utensil for scraping Tête de Moine Swiss cheese into the form of rosettes that resemble Chanterelle mushrooms (also known as girolle in French, hence the name of the device).[2] This cheese was traditionally scraped with a knife. The Girolle was invented in 1982 by Nicolas Crevoisier of the Swiss Jura and is produced by the Métafil-laGirolle company.[3]