Ethiopian culture is multi-faceted, reflecting the ethnic diversity of the country; refer the articles on the Ethnic groups of Ethiopia for details of each group.

Among many traditional customs, respect (especially of one's elders) is important. In Ethiopian culture it is customary to rise up out of one's seat or give up one's bed for an older friend or family member, even if they may be just a year older.

The music of Ethiopia is extremely diverse, with each of Ethiopia's ethnic groups being associated with unique sounds. Some forms of traditional music are strongly influenced by folk music from elsewhere in the Horn of Africa, especially Somalia. However, Ethiopian religious music also has an ancient Christian element, traced to Yared, who lived during the reign of Gabra Masqal. In northeastern Ethiopia, in Wollo, a Muslim musical form called manzuma developed. Sung in Amharic, manzuma has spread to Harar and Jimma, where it is now sung in the Oromo language. In the Ethiopian Highlands, traditional secular music is played by itinerant musicians called azmaris, who are regarded with both suspicion and respect in Ethiopian society.

In the highlands, traditional string instruments include the masenqo (also known as masinko), a one-string bowed lute; the krar (also known as kirar), a six-string lyre; and the begena, a large ten-string lyre. The dita (a five-string lyre) and musical bows (including an unusual three-string variant) are among the chordophones found in the south.

The washint is a bamboo flute that is common throughout or in the highlands. Trumpet-like instruments include the ceremonial malakat used in some regions, and the holdudwa (animal horn; compare shofar) found mainly in the south. Embilta flutes have no finger holes, and produce only two tones, the fundamental and a fourth or fifth interval. These may be metal (generally found in the north) or bamboo (in the south). The Konso and other people in the south play fanta, or pan flutes.

In the Ethiopian Orthodox Church, liturgical music employs the senasel, a sistrum. Additionally, the clergy will use prayer staffs, or maqwamiya, to maintain rhythm. Rural churches historically used a dawal, made from stone slabs or pieces of wood, in order to call the faithful to prayer. The Beta Israel use a small gong called a qachel as liturgical accompaniment, though qachel may also refer to a small bell. The toom, a lamellophone, is used among the Nuer, Anuak, Majangir, Surma, and other Nilo-Saharan groups. Metal leg rattles are common throughout the south.

The kebero is a large hand drum used in the Orthodox Christian liturgy. Smaller kebero drums may be used in secular celebrations. The nagarit, played with a curved stick, is usually found in a secular context such as royal functions or the announcement of proclamations, though it has a liturgical function among the Beta Israel. The Gurage and other southern peoples commonly play the atamo, a small hand drum sometimes made of clay.

Ethiopia is a musically traditional country. Of course, popular music is played, recorded and listened to, but most musicians also sing traditional songs, and most audiences choose to listen to both popular and traditional styles. A long-standing popular musical tradition in Ethiopia was that of brass bands, imported from Jerusalem in the form of forty Armenian orphans (Arba Lijoch) during the reign of Haile Selassie. This band, which arrived in Addis Ababa on September 6, 1924, became the first official orchestra of Ethiopia. By the end of World War II, large orchestras accompanied singers; the most prominent orchestras were the Army Band, Police Band, and Imperial Bodyguard Band. Most of these bands were trained by Europeans or Armenians.

During the 1980s, the Derg controlled Ethiopia, and emigration became almost impossible. Musicians during this period included Ethio Stars, Wallias Band and Roha Band, though the singer Neway Debebe was most popular. He helped to popularize the use of seminna-werq (wax and gold, a poetic form of double entendre) in music (previously only used in qiné, or poetry) that often enabled singers to criticize the government without upsetting the censors.

One of the most popular musicians from Ethiopia is the Los Angeles–area expatriate Aster Aweke.

More recently, music from Tigray and Eritrea has become popular in Ethiopia and among exiles, especially in Italy. One of the biggest new trends, however, has been the rise of bolel, a sort of blues-like music, played by sarcastic azmari playing in parts of Addis Ababa, especially Yohannès Sefer and Kazentchis. Bolel musicians include Tigist Assefa, Tedje and Admassou Abate.

Currently the most prominent Ethiopian singer internationally is Gigi. Through her performing with top jazz musicians such as Bill Laswell (who is also her husband) and Herbie Hancock, Gigi has brought Ethiopian music to popular attention, especially in the United States, where she now lives.

Ethiopiques producer Francis Falceto criticizes contemporary Ethiopian music for eschewing traditional instruments and ensemble playing in favor of one-man bands using synthesizers. Harvard University professor Kay Kaufman Shelemay, on the other hand, maintains that there is genuine creativity in the contemporary music scene. She further points out that Ethiopian music is not alone in shifting to electronically produced music, a point that Falceto acknowledges. 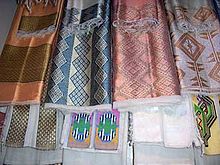 Women's traditional clothes in Ethiopia are made from cloth called shemma and used to make habesha qemis: it is basically cotton cloth, about 90 cm wide, woven in long strips which are then sewn together. Sometimes shiny threads are woven into the fabric for an elegant effect. It takes about two to three weeks to make enough cloth for one dress. The bottom of the garment or shirt may be ornamented with patterns.

An Ethiopian model at the Ethiopian Fashion Show at the 2008 International Festival in Texas.

Men wear pants and a knee-length shirt with a white collar, and perhaps a sweater. Men often wear knee-high socks, while women might not wear socks at all. Men as well as women wear shawls, the neTela. The shawls are worn in a different style for different occasions. When going to church, women cover their hair with them and pull the upper ends of the shawl about their shoulders reproducing a cross (meskelya), with the shiny threads appearing at the edge. During funerals, the shawl is worn so the shiny threads appear at the bottom (madegdeg). Women's dresses are called habesha qemis. The dresses are usually white with some color above the lower hem. Bracelets and necklaces of silver or gold are worn on arms and feet to complete the look. A variety of designer dinner dresses combining traditional fabric with modern style are now worn by some ladies in the cities.

Often, a woman will cover her head with a shash, a cloth that is tied at the neck. Shama and kuta, gauze-like white fabrics, are often used.[2] This is common among both Muslim and Christian women. Elderly women will wear a sash on a day-to-day basis, while other women only wear a sash also called a netela while attending church. 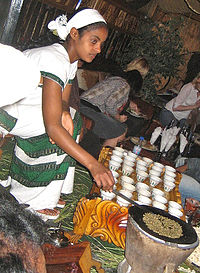 An Ethiopian woman preparing Ethiopian coffee at a traditional ceremony. She roasts, crushes and brews the coffee on the spot.

Ethiopian cuisine consists of various vegetable or meat side dishes and entrees, often prepared as a wat or thick stew. One or more servings of wat are placed upon a piece of injera, a large sourdough flatbread, which is 50 cm (20 inches) in diameter and made out of fermented teff flour. One does not eat with utensils, but instead uses injera (always with the right hand) to scoop up the entrees and side dishes. Traditional Ethiopian food does not use any pork or seafood (aside from fish), as most Ethiopians have historically adhered to Islam, the Ethiopian Orthodox Church, or Judaism, all of which prohibit eating pork. Additionally, throughout a given year, Orthodox Christians observe numerous fasts (such as Lent), during which food is prepared without any meat or dairy products. Another food eaten in Ethiopia is Doro Wat which is chicken stew with hard boiled eggs.

Ethiopia's most popular sport is track and field, in which they have won many medals in the Olympic Games. Soccer, despite lack of success by the national team, is loved by a significant part of the population.

Radio and television are under the control of the Ethiopian government. There are nine radio broadcast stations, eight AM and one shortwave, licensed to operate. The major radio broadcasting stations (all AM) are Radio Ethiopia, Radio Torch (pirate), Radio Voice of One Free Ethiopia, and the Voice of the Revolution of Tigray. The single television broadcast network is Ethiopian Television. In keeping with government policy, radio broadcasts occur in a variety of languages. Print media, because of high poverty levels, low literacy rates, and poor distribution outside of the capital, serve only a small portion of the population. Major daily newspapers include Addis Zemen, the Daily Monitor, and the Ethiopian Herald. There is also a small but lively film industry.

The official language of Ethiopia is Amharic, a Semitic language which is spoken by about 27 million people (2.7 million expatriate). Amharic is written with the Ge'ez script, which derives its name from the ancient Semitic Ge'ez language. Ge'ez is largely extinct as a productive language but is still in liturgical use by the Beta Israel Jewish community and the Ethiopian Orthodox Tewahedo Church. The second largest language in Ethiopia is the Oromo language, a Cushitic language spoken by about 30% of the population. The third largest language in Ethiopia is the Tigrinya language, related to Amharic but mostly spoken in northern Ethiopia in the state of Tigray. Additionally, most villagers are accustomed to their ethnical languages over the official Amharic language although Amharic is the only language spoken in Addis Ababa.