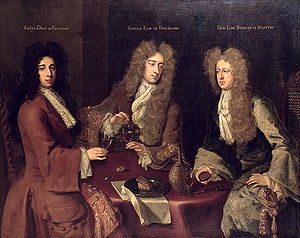 Born Hon. Charles Boyle, he was the eldest son of Charles Boyle, 3rd Viscount Dungarvan and his first wife, Jane. In 1690, he became Member of Parliament for Appleby and also Governor of County Cork that year. In 1694, resigned his seat when he inherited his father's titles of Viscount Dungarvan, Baron Clifford and Baron Clifford of Lanesborough. In 1695, he was admitted to the Privy Council of Ireland and appointed Lord High Treasurer of Ireland. In 1698, he inherited his grandfather's titles of Earl of Burlington and Earl of Cork and was appointed a Lord of the Bedchamber that year. In 1699, he was appointed Lord Lieutenant of the West Riding of Yorkshire and admitted to the Privy Council of England in 1702. He died in 1704 and his titles passed to his eldest son, Richard.

On 26 January 1688, Burlington married Juliana Noel (1672-1750), the only daughter and heiress of Hon. Henry Noel (himself the second son, by his third wife, of Baptist Noel, 3rd Viscount Campden). They had four children: