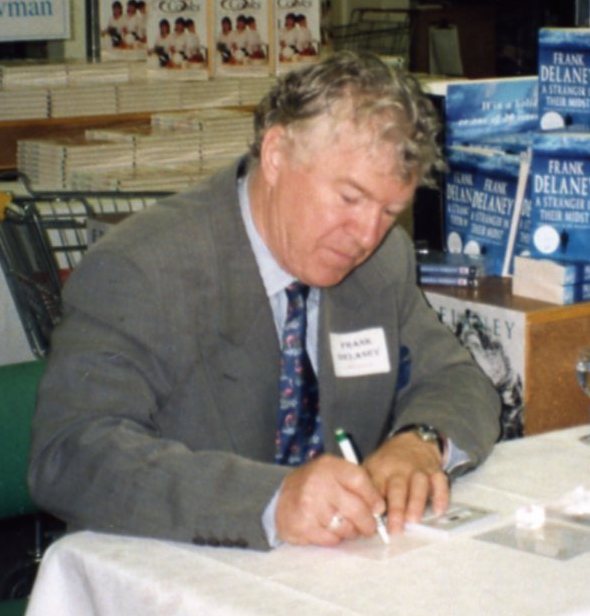 Frank Delaney (born October 24, 1942) is a novelist, journalist and broadcaster. [ [http://www.usatoday.com/life/books/reviews/2007-11-26-tipperary_N.htm Hero sets forth for the love of the Irish - USATODAY.com ] ] He's the author of New York Times best-seller "Ireland",

In 1970, Delaney began working as a newsreader for the Irish state radio and television network .

In 1981, Frank Delaney's first book, "James Joyce's Odyssey", was published to critical acclaim and became a best-seller in the UK and Ireland. In 1986, he wrote and presented the six-part documentary series "" for the BBC and its best-selling companion book. [ [http://www.imdb.com/title/tt0271900/ "The Celts" (1987) ] ] Delaney has subsequently written five books of non-fiction (including "Simple Courage"), ten novels (including the bestselling "Ireland" and "Tipperary"), one novella, and a number of short stories. He has also edited many compilations of essays and poetry.

Delaney wrote the screenplay for the newest adaptation of "," which starred and was shown on ITV in Britain, and in the United States in 2004. [ [http://www.pbs.org/wgbh/masterpiece/mrchips/ei_producers.html Masterpiece Theatre | Goodbye, Mr. Chips | Essays + Interviews | An interview with the producers ] ] He has been published in many of the leading newspapers in the United States, the UK and Ireland, including on the Op-ed pages of . He's a frequent public speaker, and has been a contributor and guest on a variety of programs.

* "Goodbye, Mr. Chips" (2003, from the James Hilton book, directed by Stuart Orme. Aired on ITV in London and Masterpiece Theater)
* "Across the River and Into the Trees" (2001, from the Hemingway novella, for Working Title Television, London, not produced)
* "Telling the Pictures" (1995, from Delaney's own novel, under option with Spikings Entertainment, Los Angeles)
* "My Dark Rosaleen" (1993, From Delaney's own novella, endowed by the European Script Fund)

* [http://loadedquestions.blogspot.com/2008/01/loaded-questions-tipperary-author-frank.html Interview with Frank Delaney] in which he discusses his work for BBC, Irish history and his new novel Tipperary set in the city Ireland where he was born.