"El Viaje Misterioso de Nuestro Jomer (The Mysterious Voyage of Homer)", also known as The Mysterious Voyage of Our Homer,[2] is the ninth episode of the eighth season of The Simpsons, which originally aired January 5, 1997.[3] The episode sees Homer eat several "Guatemalan insanity peppers" and go on a mysterious voyage, which features surreal animation to depict the elaborate hallucination. Following this, he questions his relationship with Marge and goes on a journey to find his soulmate. The episode was written by Ken Keeler, directed by Jim Reardon[3] and features Johnny Cash as the "Space Coyote."[1]

After a series of distractions from Marge, Homer suddenly smells out the annual chili cook-off. Marge admits that she was trying to keep Homer from attending because of his drunken antics at the previous year's event (he jumped into a cotton candy machine, claiming he was a "puffy pink cloud"). She allows Homer to go, on the condition that he not drink any beer. At the cook-off, Homer demonstrates an extraordinary ability to withstand hot foods, until he falls victim to Chief Wiggum's chili which is spiked with "The Merciless Peppers of Quetzlzacatenango - Grown deep in the jungle primeval by the inmates of a Guatemalan insane asylum". Homer tries one pepper but cannot stand the heat. He runs to a beer vendor and attempts to drink several at once, just as Marge walks up and catches him. He instead drinks several cups of water, fuming about his humiliation.

After nearly drinking melted candle wax, Homer decides to coat his mouth with melted wax, enabling him to eat several of the peppers, leaving Wiggum and the crowd astonished. The peppers bring on a hallucination in which Homer is trapped in a bizarre fantasy world. He encounters a large snake, a gigantic butterfly and a tortoise, and he accidentally destroys the sun. He finally arrives at a large mayan pyramid and meets his spirit guide or nahual - a coyote. The coyote advises Homer to find his soulmate, and questions Homer's assumption that he has already found her in Marge. Meanwhile, Marge hears of Homer's strange behavior and, believing he has broken his promise, drives home.

The next day, Homer regains his senses while lying in a golf course sand trap. He rationalizes his dream, comparing the desert he wandered in to the sand trap, and the talking coyote with a passing talking dog. (The dog says "Hi, Homer. Find your soulmate!", prompting Homer to observe that "there's no such thing as a talking dog", after which the dog barks, to which Homer replies, "Damn straight!") After returning home, he finds Marge angry with him for his embarrassing behavior at the cook-off. This leads to Homer making note of their fundamental personality differences, causing him to question if Marge is truly his soulmate, and he leaves. Filled with doubt, he searches elsewhere for a soulmate, yet fails in each instance.

Eventually he becomes convinced that a lighthouse keeper might be his soulmate, since they would both be theoretically lonely individuals; instead he finds the lighthouse is operated by a machine, EARL (Electronic Automatic Robotic Lighthouse). Seeing an approaching ship, Homer destroys the lighthouse's light in hopes that it will cause the boat to come closer and the people inside will befriend him. Marge arrives, having known exactly where Homer would go, and the pair realize that they really are soulmates. Marge quickly fixes the lighthouse so that the ship will not run into them, but it runs aground nearby, spilling its precious cargo of hot pants. The citizens of Springfield happily retrieve the pants while Marge and Homer embrace.[3] 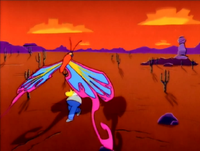 The episode was pitched as early as the third season by George Meyer, who was interested in an episode based on the books of Carlos Castaneda.[4] Meyer had wanted to have an episode featuring a mystical voyage that was not induced by drugs, and so he decided to use "really hot" chili peppers instead.[4] The staff, except for Matt Groening, felt it was too odd for the show at that point.[5] Bill Oakley and Josh Weinstein resurrected the story, and decided to use it for season eight.[4]

Most of the hallucination sequence was animated completely by David Silverman. Silverman did not want the risk of sending it to South Korea, as he wanted it to look exactly as he had imagined it, including rendered backgrounds to give a soft mystical feel to the scene.[6] The coyote was intentionally drawn in a boxier way so that it looked "other-worldly" and unlike the other characters.[7] During Homer's voyage, the clouds in one shot are live-action footage, and 3D computer animation was used for the giant butterfly.[2] During the same hallucination, Ned Flanders' line was treated on a Mac computer so that it increased and decreased pitch.[2] The Fox censors sent a note to the writers, questioning Homer coating his mouth with hot wax. The note read: "To discourage imitation by young and foolish viewers, when Homer begins to pour hot wax into his mouth, please have him scream in pain so kids will understand that doing this would actually burn their mouths."[8] The writers created a "wax-chart" for Dan Castellaneta to follow when speaking for Homer during the sequence with Homer's mouth coated with candle-wax.[5]

Homer waking up on a golf course was a reference to something that happened to a friend of the producers, who blacked out, waking up on a golf course in a different town and state. He had to buy a map from 7-Eleven in order to find out where he was. He then had to walk several miles in order to get back to his friend's house, which was the last place he remembered being the night before.[2]

Johnny Cash and Bob Dylan were the writers' top two choices to play the coyote; the writers had wanted to use one of The Highwaymen as the voice of the spirit guide.[2] Bob Dylan had turned the show down many times, having previously been offered a role in season seven's "Homerpalooza".[9] Johnny Cash was offered the role, which he accepted. Matt Groening described Cash's appearance as "one of the greatest coups the show has ever had."[5]

The main plot of the episode is based on the works of Carlos Castaneda,[4] with some of the Native American imagery being similar to that used in the film Dances with Wolves.[1] The lighthouse keeper actually being a computer is a reference to the episode of The Twilight Zone "The Old Man in the Cave", in which a man in a cave turns out to be a computer.[3] The main theme from The Good, the Bad and the Ugly is used during the scenes when Homer walks into the chili festival,[3] and the song "At Seventeen" by Janis Ian plays in the background as Homer walks through the town of Springfield looking for his soul-mate after he wakes up from his vision.[2] The scene at the end of Homer's hallucination, when the train is heading towards him, is a reference to the opening titles of Soul Train.[2] Homer's record collection features albums by Jim Nabors, Glen Campbell and The Doodletown Pipers.[1]

In its original broadcast, "El Viaje Misterioso de Nuestro Jomer (The Mysterious Voyage of Homer)" finished 34th in ratings for the week of December 30, 1996 - January 5, 1997, with a Nielsen rating of 9.0, equivalent to approximately 8.7 million viewing households. It was the highest-rated show on the Fox network that week, beating Millennium.[10]

The authors of the book I Can't Believe It's a Bigger and Better Updated Unofficial Simpsons Guide, Warren Martyn and Adrian Wood, said: "Homer's chili-induced trip is brilliant, complete with the surreal tortoise and Indian spirit guide."[1] The episode was placed eighth on AskMen.com's "Top 10: Simpsons Episodes" list,[11] and in his book Planet Simpson, Chris Turner named the episode as being one of his five favorites, although he found the ending too sentimental.[8] In 2011, Keith Plocek of LA Weekly's Squid Ink blog listed "El Viaje Misterioso de Nuestro Jomer" as the best episode of the show with a food theme.[12] IGN ranked Johnny Cash's performance as the fourteenth best guest appearance in the show's history,[13] while Cash also appeared on AOL's list of their favorite 25 Simpsons guest stars,[14] and on The Times' Simon Crerar's list of the thirty-three funniest cameos in the history of the show.[15] Andrew Martin of Prefix Mag named Johnny Cash his third favorite musical guest on The Simpsons out of a list of ten.[16]