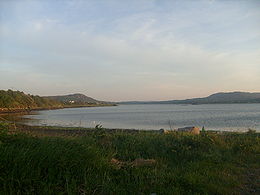 Mulroy Bay is the most convoluted of the marine inlets in north-west Ireland. It is approximately 12 km long in a north-south direction. The entrance to the bay is a narrow embayment leading to a winding entrance channel 10 km in length. This channel varies in width and depth, with three significant narrows only 100-150 m across, where the current reaches maxima of 3-5 knots. It opens into the Broad Water, an open shallow sea lough 8 km from north to south and 2.5 km from east to west, generally less than 20 m in depth and with many small rocky islands and islets.[2][3]

Settlements founded on the bay include Milford, Kerrykeel and Cranford.

Mulroy Bay has extensive Fish and Shellfish farming operations. Mussels, Scallops and Salmon are grown on a commercial basis.