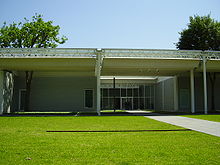 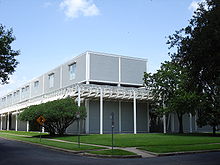 One corner of the Menil Collection

The Menil Collection, located in Houston (Texas, USA) refers either to a museum that houses the private art collection of founders John de Menil and Dominique de Menil, or to the collection itself. Dominique was an heir to the Schlumberger oil-drilling fortune, and John was an executive of that company.

The Renzo Piano-designed museum opened to the public in June 1987 and houses John and Dominique de Menils' privately-assembled collection of twentieth-century art, including over 15,000 paintings, sculptures, prints, drawings, photographs, and rare books. It includes the early to mid-twentieth century works of Yves Tanguy, René Magritte, Max Ernst, Man Ray, Marcel Duchamp, Henri Matisse and Pablo Picasso among others. The museum also maintains an extensive collection of pop art and contemporary art from Jackson Pollock, Andy Warhol, Mark Rothko, Robert Rauschenberg and Cy Twombly, among others. Also included in the museum's permanent collection are Antiquities and works of Byzantine, Medieval and Tribal art.

The Menil Collection is open to the public, and admission is free. The Museum is open Wednesday through Sunday 11 am to 7 pm. It is located near the University of St. Thomas in the Neartown area of Houston.

The museum campus has grown to include two satellite galleries to the main building: Cy Twombly Gallery (also designed by Piano) and The Dan Flavin Installation at Richmond Hall, which houses Mrs. de Menil's last commission (a series of three site-specific installations by Dan Flavin that were installed in 1998). Two other buildings founded by the de Menils, but now operating as independent foundations complete the campus: The Byzantine Fresco Chapel and the Rothko Chapel. The museum has a library that is open to qualified researchers by appointment and a bookstore open during museum hours.

The neighborhood as a whole has a coordinated feel. The Menil Foundation began buying homes in the area in the 1960s and painting them the same shade of gray over time. When the museum building was constructed, it too was painted 'Menil gray.' Though subtle, the result is a neighborhood that feels aesthetically unified. Currently the surrounding bungalows are used as additional office space for museum employees, or rented to individuals or non-profit organizations.

The Rothko Chapel, built in 1971, is an interfaith chapel commissioned by the de Menils. The entrance-way contains holy books from various religious traditions that may be used in the chapel. The space is sky-lit, with kneeling mats, prayer benches, and meditation cushions. The walls are covered with several large paintings. The Rothko Chapel is an independent, non-profit organization.

South of the entrance is a reflecting pool with the sculpture Broken Obelisk by Barnett Newman, installed here in memory of Martin Luther King, Jr.[1] 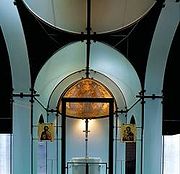 Located in a separate building near the main collection, the Byzantine Fresco Chapel houses two 13th century Byzantine church frescos, an apse semi-dome of the Virgin Panagia and a dome with Christ Pantocrator (pictures on website). These were recovered from the illegal art trade, which removed them from a church in Lysi in Turkish-occupied North Cyprus during the 1980s. According to the museum they are the only such frescoes in the Americas. They are held at the museum by agreement with the Church of Cyprus, their owners.

In September 2011 the Collection announced that the frescos would be permanently returned to Cyprus in February 2012, an example of art repatriation. The future use of the chapel remains undecided.[2]