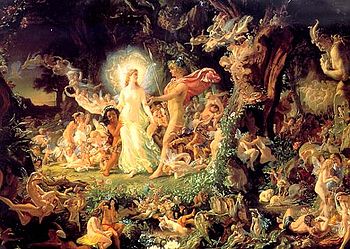 The Quarrel of Oberon and Titania (1846), by Sir Joseph Paton

Oberon (also spelled Auberon) is a fairy king of the fairies in medieval and Renaissance literature. He is best known as a character in William Shakespeare's play, A Midsummer Night's Dream, in which he is Consort to Titania, Queen of the Fairies.[1]

Oberon's status as king of the fairies comes from the character of Alberich (from Old High German alb- "elf" and -rîh-, "ruler", "king"), a sorcerer in the legendary history of the Merovingian dynasty. In the legend, he is the otherworldly "brother" of Merowech, whose name is the eponym of the Merovingians. Alberich wins for his eldest son Walbert the hand of a princess of Constantinople. In the Nibelungenlied, a Burgundian poem written around the turn of the 13th century, Alberich guards the treasure of the Nibelungen, but is overcome by Siegfried.

Alternatively he could be a reference to Freyr or Ing, who is the traditional 'King of the Elves' in Germanic mythology.[2]

The name Oberon got its literary start in the first half of the 13th century from the fairy dwarf Oberon that helps the hero in the chanson de geste, titled Les Prouesses et faitz du noble Huon de Bordeaux. When Huon, son of Seguin count of Bordeaux, passed through the forest where he lives, he was warned against Oberon by a hermit, but his courtesy had him answer Oberon's greetings, and so gain his aid in his quest: having killed Charlot, the Emperor's son, in self-defense, Huon must visit the court of the amir of Babylon and perform various feats to win a pardon, and only with Oberon's aid does he succeed.

This elf appears dwarfish in height, though very handsome; he explains that at his christening, an offended fairy cursed him to the height (an example of the wicked fairy godmother folklore motif), but relented and as compensation gave him great beauty. As Alberich features as a dwarf in the Nibelungen, the dwarfish height was thus explained.[3]

The real Seguin was Count of Bordeaux under Louis the Pious in 839, and died fighting against the Normans in 845. Charles l'Enfant, a son of Charles the Bald, died in 866 of wounds inflicted by a certain Aubouin in the circumstances of an ambush similar to the Charlot of the story. Thus Oberon appears in a 13th century French courtly fantasy that is based on a shred of 9th century fact. He is given some Celtic trappings, such as a magical cup (similar to the Holy Grail) that is ever-full for the virtuous: "The magic cup supplied their evening meal; for such was its virtue that it afforded not only wine, but more solid fare when desired" according to Thomas Bulfinch. In this story he is said to be the child of Morgan le Fay and Julius Caesar.

A manuscript of the romance in the city of Turin contains a prologue to the story of Huon de Bordeaux in the shape of a separate romance of Auberon, and four sequels, and there are later French versions as well.

Shakespeare saw or heard of the French heroi song, through the ca 1540 translation of John Bourchier, Lord Berners, called Huon of Burdeuxe. In Philip Henslowe's diary there is a note of a performance of a play, Hewen of Burdocize, on December 28, 1593.

Oberon is the king of all of the fairies in William Shakespeare's A Midsummer Night's Dream who is feuding with his wife Titania, the queen of the fairies. They are fighting over a baby that Oberon wants to raise as his henchman. Titania wants to keep the baby because he is the child of Titania's mortal follower who died, and she wants to raise the child for her follower. Because Oberon and Titania are powerful fairies, their arguments affect the weather. Titania describes what happens to nature when they argue, saying:

Therefore the winds, piping to us in vain,
As in revenge, have suck'd up from the sea
Contagious fogs; which falling in the land
Have every pelting river made so proud
That they have overborne their continents:
The ox hath therefore stretch'd his yoke in vain,
The ploughman lost his sweat, and the green corn
Hath rotted ere his youth attain'd a beard;
The fold stands empty in the drowned field,
And crows are fatted with the murrion flock;
The nine men's morris is fill'd up with mud,
And the quaint mazes in the wanton green
For lack of tread are undistinguishable:
The human mortals want their winter here;
No night is now with hymn or carol blest:
Therefore the moon, the governess of floods,
Pale in her anger, washes all the air,
That rheumatic diseases do abound:
And thorough this distemperature we see
The seasons alter: hoary-headed frosts
Far in the fresh lap of the crimson rose,
And on old Hiems' thin and icy crown
An odorous chaplet of sweet summer buds
Is, as in mockery, set: the spring, the summer,
The childing autumn, angry winter, change
Their wonted liveries, and the mazed world,
By their increase, now knows not which is which:
And this same progeny of evils comes
From our debate, from our dissension;
We are their parents and original.
(Act 2, Scene 1)

Furious that Titania will not give him the child, he puts juice from a magical flower into her eyes while she is asleep. The effect of the juice is that it will cause Titania to fall in love with the first thing she sees. Titania awakens and finds herself madly in love with Bottom, a weaver that has been given a donkey's head by Puck. Meanwhile, two couples have entered the forest: Hermia and Lysander are pursued by Demetrius, who also loves Hermia, and Helena, who loves Demetrius. Oberon sends Puck to put some of the juice in Demetrius's eyes to make him fall in love with Helena, after he witnesses him rejecting her. When Puck puts the love potion on Lysander by mistake, and then on Demetrius, Helena finds herself loved by two men, and confusion breaks out. After Puck straightens out what he has done, and Demetrius discovers that he is really in love with Helena after all, Oberon looks upon Titania and her lover, Bottom, and feels sorry for what he has done. He reverses the spell and when Titania awakes the two reunite.