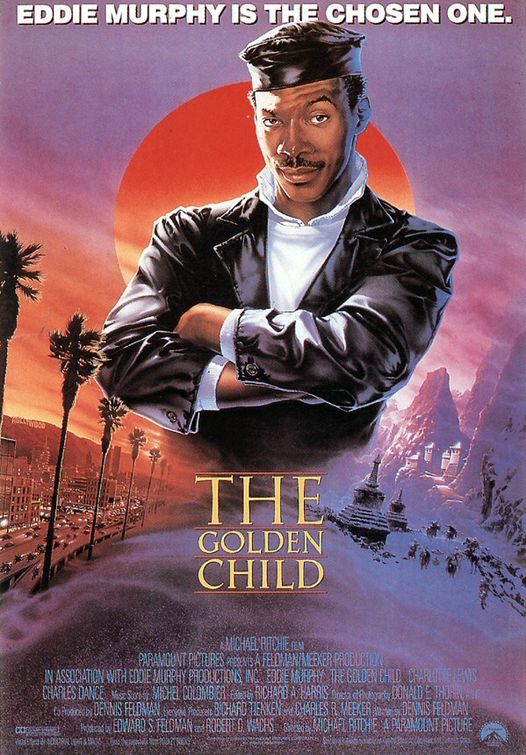 "The Golden Child" is a 1986 American mystical starring . Murphy plays Chandler Jarrell, a who is confronted by a young Asian woman (), who tells him that he is the Chosen One destined to save The Golden Child, the saviour of all mankind, from the clutches of the demon Sardo Numspa, played by . The film was directed by .

In an unknown location in , a young boy with mystical abilities, the Golden Child, receives badges of honor and demonstrates his power by reviving a dead bird, which is to become a constant companion. However, a band of villains led by a mysterious man (Sardo Numspa) breaks into the hidden temple, slaughters the monks and takes the boy away.

Some time afterwards, a young woman named Kee Nang watches a TV show in which Chandler Jarrell, a social worker who engages in finding missing children, appears and tries to present his latest case (a missing girl named Cheryll Mosley) over the host's prattling. She seeks him out the next day and openly informs him of the kidnapping of the Golden Child and that he is the 'Chosen One' who would recover it from the hands of evil. Jovial and worldly as he considers himself, Chandler does not take this seriously, even after the appearance of the astral form of the Child and his bird following Chandler everywhere he goes, but he is instantly taken with Kee Nang and constantly tries to flirt with her.

Soon Cheryll Mosley is found, dead from loss of blood, near an abandoned house smeared with Tibetaian graffity and a pot full of blood-soaked oatmeal. Kee Nang reveals to him that this house was a holding place for the Child and brings Chandler in contact with Doctor Hong, a mystic expert, and Kala (a creature half snake, half human woman, who remains hidden behind a screen). Together they track down a motorcycle gang named the Yellow Dragons, which Cheryll had joined, and then the Chinese restaurant owner Tommy Tong, a henchman of Numspa, to whom Cheryll had been 'sold' for her blood, which was to be used to make the Child vulnerable to earthly harm; Tong, however, is killed by Numspa as a potential traitor. Still not taking the case too seriously, Chandler is quickly convinced when Numspa — whom Chandler begins to continuously call "Numpsy" — draws him into a controlled dream, where he leaves a burn mark on Chandler's arm. He also presents his demands: the Ajanti Dagger (a mystic weapon which is capable of killing the Golden Child) in exchange for the boy.

Chandler and Kee Nang travel to Tibet, where Chandler is apparently swindled by an old amulet seller, who later turns out to be the High Priest of the temple where the dagger is kept hidden (and, subsequently, Kee Nang's father). In order to obtain the blade, Chandler has to pass a test: an obstacle course in a bottomless cavern whilst carrying a glass of water without spilling even one drop. With luck and wits, Chandler recovers the blade and even manages to bring it past customs into the United States.

At their hideout, however, Numspa and his henchmen attack them. The Ajanti Dagger is lost to the villains, and Kee sacrifices her life for Chandler, taking a crossbow bolt meant for him, and dies in his arms confessing her love for him. Doctor Hong offers him hope, for as long as the sun shines upon Kee, the Child might be able to save her yet. Driven now by a personal motive, Chandler — with the help of the Child's familiar — locates Numspa's hideout, retrieves the dagger, fights past the guards with the help of Til, one of Numspa's men converted to good by the Child, and frees the boy. But as he prepares to finish Numspa, the latter reveals his true face as a flying from hell. Chandler and the Child escape the hideout, only to be tracked down by the demon. After some narrow escapes, Chandler and the child seek shelter in an old abandoned industrial warehouse, but seconds later, Sardo is back on top of them, destroying the warehouse and fighting Chandler. Having been outmatched by Sardo, he and the child escape, but Chandler loses the dagger after Sardo whacks him with his right wing. They escape again and head over to Doctor Hong's shop where Kee is being kept.As the two approach Kee Nang's body, Numspa smashes up through the floor with the dagger in his hand, but his attempt to kill Chandler with it is foiled by the amulet the Old Man had sold him. The Child places the dagger back into Chandler's hands, and Chandler destroys Numspa with it. The Child then uses the last ray of sunlight and his powers to bring Kee back from the dead. As the movie ends, the three take a walk discussing the Child's return to Tibet and (as Chandler jokingly suggests) the boy's prospective fame as a .

was at one point attached to direct, but ultimately dropped out. He would later direct "", a film with similar Chinese mysticism themes which was initially set to be released in the same time frame as this film.

Actor was also originally slated to play the role of Chandler Jarrell. When Gibson was unavailable, the producers selected Murphy, and changed the movie from a drama to a comedy. Until Murphy did "The Nutty Professor", this was the only film he starred in that was rated less than R in America. makes a small, cameo appearance as a drunk member of the Yellow Dragons biker gang with horrible breath from previously-consumed liquor. A tied-up Murphy, as LeBell (in character) coughs near his face, begs him to please take as many Tic Tacs from out of his pocket as he likes.

John Barry began scoring this film, but during production left the project after differences with the producers, and his music was replaced with a mostly synth-pop/orchestral score by , however some Barry cues remain in the final film, and one track, "Wisdom of the Ages," appears on the soundtrack.

Contrary to popular opinion, the Ajanti Dagger in the film is not the same knife prop used in "The Shadow" (with ), but both are based on the Tibetan dagger. The exotic weapons wielded by the villain Tommy Tong are called hook swords.

"" was a film inspired from this movie.