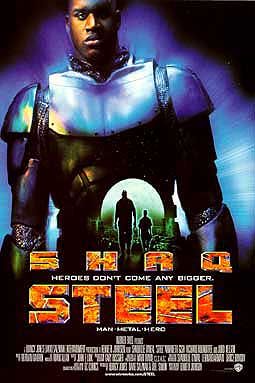 "Steel" is a 1997 starring star and future "X-Files" star . Based on the character of the same name, the film (released on ) was considered a huge disappointment both critically [ [http://www.badmovies.org/othermovies/steel/ Steel B-Movie Review] ] and financially. "Steel" was produced for an estimated $16,000,000 but grossed only $1,686,429 at the box office.

() is a weapons designer for the United States military. When his project to create weapons that harmlessly neutralize soldiers is eradicated, he resigns in disgust. When he sees criminal gangs are using the weapons that he helped manufacture on the street, he uses his resources and his Uncle Joe's () equipment in his junkyard to fight back against the man who's been selling them to those gangs: Nathaniel Burke (). In order to do so, he uses the resources that are available to him to forge himself a suit of armor and the weaponry necessary to carry out his war on crime. In the end Burke was arrested by the army. John Henry Irons, Susan Sparks, Uncle Joe and Martin get together at Grandma Odessa's new restaurant.

The film was originally designed to be a spinoff of the new film that used the "Death of Superman" storyline that originally introduced the character in the comics. The project languished in for so long the spinoff moved forward without the film it was to be attached to. A similar incident happened with "Catwoman", a spin-off of "", where so much time had passed and the project changed so much the connection was lost.Fact|date=February 2008

There is apparently no Superman in the universe of the movie, but Irons wears a tattoo of Superman's symbol with the caption "Man of Steel", a tattoo that Shaq already had.