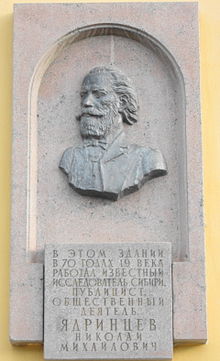 Nikolai Mikhailovich Yadrintsev (Russian: Николай Михайлович Ядринцев; October 18, 1842, Omsk - June 7, 1894, Barnaul) was a Russian public figure, explorer, archaeologist, and turkologist. His discoveries include the Orkhon script, Genghis Khan's capital Karakorum and Ordu-Baliq, the capital of the Uyghur Khaganate. He was also one of the founding fathers of Siberian separatism.

Nikolai Yadrintsev was born to a family of an Omsk merchant. After Tomsk gymnasium, he entered the Petersburg University. There he began his active public work, in 1860 together with his friend and soulmate G.N.Potanin, N.Yadrintsev organized a circle of Siberian students with members S.S.Shashkov, N.I.Naumov, I.V.Omulevsky, I.A.Khudyakov, Ch.Valihanov and others, future outstanding writers and scientists. The social movement of 1860es captivated the members of the Siberian countrymen, they established connections with democratic revolutionaries, read forbidden literature, and participated in students' revolts, which got them arrested. During those years the journal "Spark" (Russian "Iskra"), a clone of "Contemporary", printed first indictive feuilletons of N.Yadrintsev. In the 1860s N. Yadrintsev became a convinced democrat.

The members of Russian-Siberian community took close to their hearts the needs of their native land, transformed by czarism into a colony, and decided to selflessly struggle for the development of the Siberian fringes, against its subjugated position. The movement started by N.Yadrintsev and G.N.Potanin received a name "Siberian patriotism" or "Siberian separatism". They believed that only Siberians can protect the interests of Siberia, the purpose and obligation of all Siberians they saw only in the service to their land. They raised the inevitability of separation of Siberia from Russia, and in their leaflet they called on the fellow countrymen to rise and create in Siberia an independent democratic republic.

In 1862-1863 the members of the Siberian community, interrupting their studies, departed to the Siberian cities to advance their ideas. Their appeal did not meet a fervent response, but their oral and printed campaign against imperial authorities and oppressors of Siberia, for the revival and education of a native territory were supported by progressive part of the Siberian public, especially youth. A number of articles, feuilletons, and speeches of N. Yadrintsev with sharp condemnation of the defects of the local possessor class and functionaries of administration belongs to that time. N.Yadrintsev passionately appealed to open a university in Siberia, and started a campaign gathering donations for the university, which continued for over 20 years. In 1880 in Tomsk was initiated, and in 1888 opened the first Russian university in Siberia.

The Siberian separatists alarmed the government, they were arrested in 1865. During investigation, N.Yadrintsev spent three years in prison in his native Omsk. In 1868 the "Siberian separatists" N.Yadrintsev, G.N.Potanin and other Siberian patriots were sentenced to forced labor and exile. N.Yadrintsev was sent to Shenkursk in the Arkhangelsk province, where he spent five years in exile (1868-1873) in relentless work on self-education, study of history, Siberian problems, development of main principles of Siberian separatism. He made acquaintance with the works of K.Marx, and though he did not become a Marxist, he adopted some of its positions. He was publishing essays, articles and feuilletons in "Business", "Domestic Notes", "Week", "Volga-Kama newspaper" and other liberal periodicals. In Shenkursk in 1872 he authored his first monograph "Russian community in prison and exile", which brought wide popularity to the author and his progressive ideological and scientific positions.

In 1873 the N.Yadrintsev's sentence was "most mercifully" commuted by the Czar, and N.Yadrintsev left for Saint Petersburg, and then to Omsk, where he entered a state service and lived till 1881. In Omsk N.Yadrintsev collected contemporary records on various scientific and social problems of the "aliens" (indigene peoples in Russian colonial lingo), peasants, and migrants. From Omsk, under a contract with Russian Geographical Society, he traveled twice across Siberia and Altai, researching economy and geography, archeology and ethnography, anthropology and linguistics. During his criss-crossing Altai in 1878-1880, N.Yadrintsev collected data about kurgans, fortresses and other archaeological monuments, recorded legends about some of them, produced sketches of many archaeological finds. These materials were published by the Moscow Archaeological Society. For the results of his scientific travel, N.Yadrintsev was awarded a Gold medal of Russian Geographical Society.

In 1881 N.Yadrintsev moved to Petersburg, till 1887. From the materials collected in Siberia, he wrote a monograph "Siberia as a colony" which was taken in Russia as a most monumental work of Siberian literature, and an encyclopedia of Siberian life. In the book the author developed main principles of the Siberian separatism.

From 1881 N.Yadrintsev began publishing a newspaper "Eastern Review" with democratic orientation. The articles, feuilletons, and reportages were greeted by ordinary ethnically Russian people, who were suffering from the arbitrariness of local authorities and exploitation. Many authors were political exiles. They were exposing the Siberian rulers,and disclosing machinations. The newspaper gained immediate popularity in Siberia, and became a recognized leader of the Siberian press, but within the Siberian administration and local moneymen it ignited a hatred and rage. The newspaper promoted awakening and development of public consciousness of the Siberian Russian intelligentsia and other populations. It supported expansion of the rights of the rural and city autonomies, freedom of press and public life, reorganization of the primitive school system, publicity in the jury court system. By the 1880s, N.Yadrintsev was publishing articles not only in the "Eastern Review", but also in dozens of other editions, "European Bulletin", "Domestic Notes", "Russian Register", "Business", etc. N.Yadrintsev's name became known to the whole progressive Russia, he established connections with the "Freedom of Labor" group in Geneva. In 1888 the publication of "Eastern Review" was moved from Petersburg to Irkutsk, closer to its audience, with N.Yadrintsev remaining in the Petersburg capital.

N.Yadrintsev worked to speed up the development of the backward fringe of the Russian empire. He hoped to awake the "local patriotism" in various layers of the Siberian population and first of all of the small ethnically Russian Siberian intelligentsia, which would help to improve the governance and enlightenment of Siberia, to lead it to prosperity. But as the years went, the number of the Siberian patriots have not increased, and Siberia remained in a sad position. N.Yadrintsev was especially depressed by the growth of the Siberian moneyed elite. Professing the "People's Will" ideas, he hoped that Siberia leapfrog a capitalism stage.

In 1889 under contract with Russian Geographical Society N.Yadrintsev traveled to Mongolia, where he located the remains of Early Middle Age city Hara - Balgas and the ancient Mongolian capital Karakorum. In the Kosho-Tsaidam gorge (valley of the Orkhon river) N.Yadrintsev found two petroglyphic monuments with runiform writing of ancient Türks of the 6-8th centuries, later decoded by the Danish scientist W.Tomsen. These discoveries brought N.Yadrintsev a world fame, and became the greatest scientific sensation of the 19th century. In a quick succession, already in the 1891 was organized a follow-up Orhon expedition of the Russian Academy of Sciences with participation of N.Yadrintsev, led by an ethnically German native from Barnaul, a recognized Turkologist academician W.W.Radloff. The Orhon expedition found more monuments of runiform writing with epitaphs of the Türkic kagans and other nobility. The results of the expedition were published by W.W.Radloff in the "Atlas of Mongolia antiquities" (1892-1893) and in aspecial collection of works of the Orhon expedition (1892).

In 1891 N.Yadrintsev published his third monograph "Siberian ailians, their life and modern status", supplementing his book "Siberia as a colony". With graphical actual material the book depicted the distress state of the Siberian nations, subsisting in poverty and ignorance, ruthlessly oppressed by tsarism and Russian capitalists. At the same time N.Yadrintsev highly valued the influence of Russian people on the transition of the Siberian nomads to a subsistence settled agriculture, and their familiarization with Russian culture. The author displayed in his monograph his great humanty as a real friend and defender of small peoples of Siberia. Simultaneously, N.Yadrintsev published in Geneva a brochure "Illusion of Greatness and a Misery", ruthlessly criticizing the Russian autocracy.

In 1891-1892 N.Yadrintsev left Petersburg for Tobolsk province, where he assisted in organization of help to the starving and stricken by cholera epidemy, to save the peasants and especially immigrants from Russia. In the 1890es N. Yadrintsev specially went to France and America to study migrant problems, to help the Russian migrants to Siberia. For practical realization of his plans in 1894. N.Yadrintsev came to Barnaul, where, in his own words, he started a "peasant war" to protect the Russian Altay farmers. There, on June 7, 1894 N.Yadrintsev has died.

There are streets named after him in Siberian cities Omsk, Irkutsk, Barnaul. Yadrintsevskaya Street in Novosibirsk is also called after him.

This article is a summary of biographical article in the "Memorials of Barnaul history and culture", Barnaul, 1983, pp. 70-77 (in Russian)