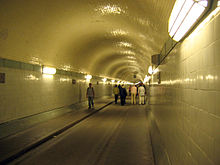 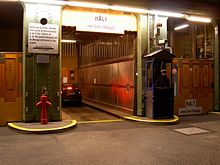 View from the ground of the tunnel to the top, north exit

Old Elbe Tunnel or St. Pauli Elbe Tunnel (German: Alter Elbtunnel (coll.) or St. Pauli Elbtunnel (official name)) which opened in 1911, is a pedestrian and vehicle tunnel in Hamburg, Germany. The 426 m (1,398 ft) long tunnel was a technical sensation; 24 m (80 ft) beneath the surface, two tubes with 6 m (20 ft) diameter connect central Hamburg with the docks and shipyards on the south side of the river Elbe. This meant a big improvement for tens of thousands of workers in one of the busiest harbours in the world.

Four huge lifts on either side of the tunnel carried pedestrians, carriages and motor vehicles to the bottom. They are still in operation, though due to the limited capacity by today's standards, other bridges and tunnels have been built and taken over most of the traffic.

On July 22, 1907 the construction of the tunnel started to connect the quarters of St. Pauli near the Landungsbrücken and Steinwerder.

Work was done under pressure because the tunnel was below the water table of the Elbe. This type of building technique was used in the 19th century, in large engineering excavations , such as with the piers of bridges and with tunnels, where caissons under pressure were used to keep water from flooding the excavations, such as the foundations of the Brooklyn Bridge in New York.

But workers who spend time in high-pressure atmospheric pressure conditions are at risk when they return to the lower pressure outside the caisson without slowly reducing the surrounding pressure. Due to the problems associated with decompression sickness, many of the men working on the Elbe tunnel were affected by, what was known at the time, Caisson's Disease. Three men died, 74 suffered severe cases and more than 600 came down with light symptoms among 4,400 workers.

In the tunnel an art exhibition (ElbArt (German)) and a long-distance running event Elbtunnel-Marathon (website of the organiser (German)) are taking place.[1] In 2008 the tunnel participated in the Tag des offenen Denkmals (Day of the open heritage site), a Germany-wide annual event sponsored by the Deutsche Stiftung Denkmalschutz, that opens cultural heritage sites to the public.[2]

The old tunnel has featured in several films including The Odessa File, $ (film), and The American Friend (Der Amerikanische Freund).

The tunnel walls are decorated with glazed terra cotta ornaments displaying items related to the Elbe river. While mostly fish or crabs, a few show different items like waste and rats, too.