i/ˈtaɪn/ is a river in North East England in Great Britain. It is formed by the confluence of two rivers: the North Tyne and the South Tyne. These two rivers converge at Warden Rock near Hexham in Northumberland at a place dubbed 'The Meeting of the Waters'.

The North Tyne rises on the Scottish border, north of Kielder Water. It flows through Kielder Forest, and passes through the village of Bellingham before reaching Hexham.

The South Tyne rises on Alston Moor, Cumbria and flows through the towns of Haltwhistle and Haydon Bridge, in a valley often called the Tyne Gap. Hadrian's Wall lies to the north of the Tyne Gap. Coincidentally the source of the South Tyne is very close to the sources of the other two great rivers of the industrial north east namely the Tees and the Wear. The South Tyne Valley falls within the North Pennines Area of Outstanding Natural Beauty (AONB) - the second largest of the 40 AONBs in England and Wales.

The combined Tyne flows from Hexham, the area where the river's now thriving barbel stocks were first introduced in the mid 1980s, through Corbridge in Northumberland. It enters the county of Tyne and Wear between Clara Vale (in the Borough of Gateshead on the south bank) and Tyne Riverside Country Park (in Newcastle upon Tyne on the north bank) and continues to divide Newcastle and Gateshead for 13 miles (21 km), in the course of which it is spanned by 10 bridges. To the east of Gateshead and Newcastle, the Tyne divides Hebburn and Jarrow on the south bank from Walker and Wallsend on the north bank. Jarrow and Wallsend are linked underneath the river by the Tyne Tunnel. Finally it flows between South Shields and North Shields into the North Sea. As it passes through the Tyneside conurbation, the river marks the historic border between County Durham (to the south) and Northumberland (to the north).

With its proximity to surrounding coalfields, the Tyne was a major route for the export of coal from the 13th century until the decline of the coal mining industry in North East England in the second half of the 20th century. The largest coal staithes were located at Dunston in Gateshead, Hebburn and Tyne Dock, South Shields. The dramatic wooden staithes (a structure for loading coal onto ships) at Dunston, built in 1890, have been preserved, although they were partially destroyed by fire in 2006.[1] And to this day in 2008 Tyne Dock, South Shields is still involved with coal, importing 2 million tonnes of shipments a year.

The lower reaches of the Tyne were, in the late 19th and early 20th centuries, one of the world's most important centres of shipbuilding, and there are still shipyards in South Shields and Hebburn to the south of the river.

To support the shipbuilding and export industries of Tyneside, the lower reaches of the river were extensively remodelled during the second half of the 19th century, with islands removed and meanders in the river straightened.

The tidal river is now managed by the Port of Tyne Authority.

TyneMedia is a media production company based on the River Tyne

Nothing definite is known of the origin of the designation "Tyne", nor is the river known by that name until the Saxon period: Tynemouth is recorded in Anglo-Saxon as Tinanmuðe (probably dative case). There is a theory that Tīn was a word that meant "river" in the local Celtic language or in a language spoken in England before the Celts came: compare Tardebigge. There is also a river Tyne that rises in Midlothian in Scotland and flows through East Lothian into the North Sea.

The River Vedra on the Roman map of Britain may be the Tyne, or may be the River Wear. The late Thomas John Taylor supposed that the main course of the river anciently flowed through what is now Team Valley, its outlet into the tidal river being by a waterfall at Bill Point. His theory is not far from the truth, as there is evidence that prior to the last Ice Age, the River Wear did once follow the current route of the lower River Team, merging with the Tyne at Dunston. Ice diverted the course of the Wear to its current location, flowing east from Washington (virtually parallel to the course of the Tyne) and joining the North Sea at Sunderland. 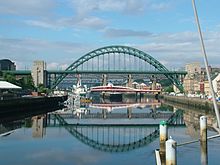 The Tyne Bridge across the River Tyne between Newcastle upon Tyne and Gateshead. Taken from the deck of the Gateshead Millennium Bridge, looking west and upstream.

The River Tyne flowing through Newcastle upon Tyne

The Environment Agency is currently working with architects and cultural consultancy xsite, in collaboration with Commissions North, to create a travelling sculpture trail along the River Tyne.

The Tyne Salmon Trail[2] will serve as a celebration of the river, its heritage and its increasingly diverse ecosystem. Historically a major symbol in the regional identity of the North East of England, the river plays host to a plethora of different species, the number of which is growing year on year in line with the rivers improving health.

The Tyne Salmon Trail looks to capture the imagination of residents and tourists visiting the area - providing them with the ultimate 'fact finding' design experience, which celebrates the salmon's migratory journey in the Northeast of England.

FINS, REFLECTION and JOURNEY were the first 3 cubes to be launched in December 2007 from a family of 10. Each cube is inspired by the textures, changing colours, movement and journey of the salmon. With each offering a 'modern day keepsake' to take away, in the form of a designed Bluetooth message.

The other cubes will be moving along the River Tyne over 1 year visiting different locations from Kielder to the Mouth of the Tyne in the summer 2008 before starting their long journey back to their birth place.

Created by acclaimed Spanish sculptor, Juan Muñoz in 1999. Celebrating the Tyne Salmon;[2] here with the 2008 River Tyne Bluetooth Salmon Trail Cubes,[3] are the 22 bronze life size figures that command and celebrate a superb view of South Shields Harbour and the Tyne Piers.

In 2008 a temporary bamboo sculpture was commissioned as the eighth bridge over the Tyne; the Bambuco Bridge was open between the 18th and 20 July 2008.

The River Tyne has a charity dedicated to protecting and enhancing its waters and surrounding areas. The Tyne Rivers Trust, established in 2004, is a community based organisation that works to improve habitat, promote better understanding of the Tyne catchment area and build the reputation of the Tyne catchment as a place of environmental excellence.[4]