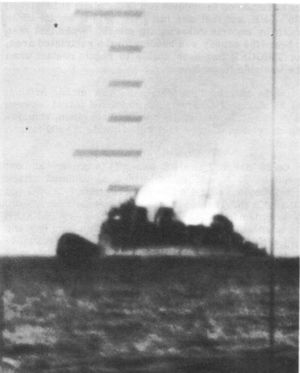 Okikaze (沖風, Offshore Wind?)[1]was a Minekaze-class destroyer destroyer, built for the Imperial Japanese Navy immediately following World War I. Advanced for their time, these ships served as first-line destroyers through the 1930s, but were considered obsolescent by the start of the Pacific War.

Construction of the large-sized Minekaze-class destroyers was authorized as part of the Imperial Japanese Navy's 8-4 Fleet Program from fiscal 1917–1920, as an accompaniment to the medium-sized Momi-class destroyer, with which they shared many common design characteristics.[2] Equipped with powerful engines, these vessels were capable of high speeds and were intended as escorts for the projected Amagi-class battlecruisers, which were ultimately never built.[3] Okikaze, built at the Maizuru Naval Arsenal, was the third ship of this class. It was laid down on February 22, 1919, launched on October 3, 1919 and commissioned on August 17, 1920. [4]

On completion, Okikaze was teamed with sister ships Minekaze, Sawakaze, and Yakaze at the Sasebo Naval District to form Destroyer Division 2 under the IJN 2nd Fleet.

From 1930-1932, Destroyer Division 2 was reassigned to the IJN 1st Air Fleet as part of the escort of the aircraft carrier Akagi, to assist in search and rescue operations for downed aircraft.

At the time of the First Shanghai incident of 1932, Okikaze was engaged in river patrol duties along the Yangzi River in China.

At the time of the attack on Pearl Harbor, Okikaze was based at the Ōminato Guard District in northern Japan, and was assigned to patrols of the Tsugaru Strait and the coastline of southern Hokkaidō.

In April 1942, Okikaze was recalled to the Yokosuka Naval District, where it was assigned anti-submarine patrols of the entrance of Tokyo Bay for the duration of the war, making only an occasional convoy escort run along the coast of Japan to Kushimoto, Wakayama or patrols of the coast of northern Honshū through the end of 1942.

However, Okikaze was not officially removed from navy list until March 1, 1944[6]