Constantine Bodin (Константин Бодин) was the montenegran King and titular King of Duklja. He was titled Prince (Knez), but was self-proclaimed King (as his father). He was emperor of Bulgaria by name Peter III in 1072. He was member of the Montenegran Vojislavljević dynasty.

Bodin was the seventh son of Mihailo Vojislavljević, the first Serbian King and his wife Neda Monomachos. His paternal grandparents were Stefan Vojislav, Prince of Duklja and Theodora Kosara, granddaughter of Emperor Samuel of Bulgaria. His mother was a niece of the Byzantine Emperor Constantine IX Monomachos (1042-1055).

In 1072, the Bulgarian noblemen in Skopje planned a revolt against Byzantine rule under the leadership of Georgi Voiteh, the exarchos of Skopje. The rebel chieftains (proechontes) asked King Michael I of Zeta for help in exchange to provide one of his sons, as descendant of the House of the Cometopuli, to assume the Bulgarian throne and end the opression[1] made by the Byzantines.[2]

In the fall of 1072, Michael I gladly sent Bodin with 300 troops, he arrived at Prizren and met with Voiteh and other magnates. At Prizren[3] they crowned him "Emperor of the Bulgarians" and gave him the name 'Peter III', recalling the names of the Emperor-Saint Peter I (died in 970) and of Peter II Delyan (who had led the first major revolt against Byzantine rule in 1040–1041).[2]

In the meantime, the Byzantine doux of Skopje, Nicephorus Carantenus, marched towards Prizren with an army, but was replaced prior to the battle with Damian Dalassenus, who destroyed the morale of the army that would fight the Serbs. The rebel army was grouped in two, the first was led by Bodin and headed for Niš, while his second-in-command Vojvoda Petrilo headed for Kastoria via Ochrid.[2]

Petrilo, headed south and took Ohrid (without a battle) and Devol, but suffered a defeat at Kastoria, where Byzantine Slavic Boris David commanded a Bulgarian contingent and defeated Petrilo, sending him fleeing "through inaccessible mountains".[2]

The troops of Bodin-Peter took Niš and started plundering the region, abusing his 'subjects', this was seen by Vojteh as Bodin being greedier than Michael VII, and when the Byzantines under Saronites marched onto Skopje, Bodin showed no concern, making Vojteh surrender without resistance. A Byzantine garrison was installed at Skopje, and Saronites headed for Niš. Subsequently, Bodin was captured and sent to Constantinople, then Antioch, where he spent several years. Vojteh died en route.[2] 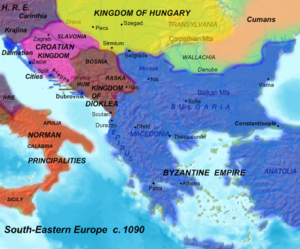 1080 AD. The zenith of Dukljan power during King Bodin

By 1085, he and his brothers had suppressed a revolt by their cousins, the sons of Michael's brother Radoslav in the župa of Zeta, and Constantine Bodin ruled unchallenged. In spite of his earlier opposition to the Byzantine Empire, Constantine Bodin at first supported the Byzantines against the attack of Robert Guiscard and his Norman on Durazzo in 1081, but then stood idle, allowing the Normans to take the city.

At about this time, Constantine Bodin married the daughter of a pro-Norman nobleman from Bari. Constantine Bodin's relations with the west included his support for Pope Urban II in 1089, which secured him a major concession, the upgrading of his Bishop of Bar to the rank of an Archbishop.

Constantine Bodin attempted to maintain the enlarged realm left him by his father. To do so, he campaigned in Bosnia and Raška, installing his relative Stefan in Bosna and his nephews Vukan and Marko as župans in Raška. The two brothers were sons of Constantine Bodin's half-brother Petrislav, who had governed Raška in about 1060–1074. However, after the death of Robert Guiscard in 1085, Constantine Bodin was faced by the hostility of the Byzantine Empire, which recovered Durazzo and prepared to punish the king of Duklja for siding with the Normans.

The Byzantine campaign against Duklja is dated between 1089 and 1091 and may have succeeded in taking Constantine Bodin captive for the second time. Although the kingdom survived, outlying territories including Bosna, Raška, and Hum seceded under their own governors. Exactly what happened in Duklja is unknown, and there may have been a civil war during Constantine Bodin's possible captivity. Queen Jakvinta ruthlessly persecuted possible claimants to the throne, including Constantine Bodin's cousin Branislav and his family. After a number of these persons were killed or exiled by Constantine Bodin and his wife, the church managed to keep the impending blood feud from sparking off a full-blown civil war. 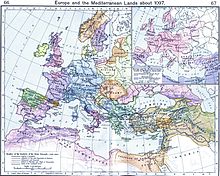 In the winter of 1096-1097 the Crusaders under Raymond of Toulouse met Bodin at Scutari, the Crusaders were hospitably received and entertained.[4][5]

On Constantine Bodin's death in 1101 or possibly 1108, Duklja was engulfed in the conflict caused by the dynastic strife that had begun to develop during his reign.

By his wife Jakvinta of Bari, Constantine Bodin had several children, including: