The Mindanao River, also known as the Rio Grande de Mindanao, is the second largest river system in the Philippines, after the Cagayan River of Luzon[1]. It is also the largest river on the southern Philippine island of Mindanao having a drainage area of 23,169 square kilometers, draining majority of the central and eastern portion of the island. It is also the second longest river in the country with a length of approximately 373 km (232 mi)[2]. It is an important transportation artery on the island, used mainly in transporting agricultural products and, formerly, timber.

Its headwaters are in the mountains of Impasug-ong, Bukidnon, south of Gingoog City in Misamis Oriental, where it is called the Pulangi River. Joining the Kabacan River, it becomes the Mindanao River. Flowing out of the mountains, it forms the center of a broad, fertile plain in the south-central portion of the island. Before its mouth in the Moro Gulf, it splits into two parallel sections, the Cotabato and Tamentaka, separated by a 180 m (600 ft) hill.

Population centers along the river include Cotabato City, Datu Piang, and Midsayap.

The Mindanao River has its source in the Central Mindanao Highlands near the northern coast of the island, specifically on the northeastern part of the province of Bukidnon, where it is known as the Pulangi River. It then flows southward across the Bukidnon Plateau, fed up by its tributaries along the way and then emerges onto the Cotabato plains, depositing fertile mountain silt as it widens and arcs westward through the 1,000-square-mile (2,600 km2) Cotabato River Basin. It finally empties into Illana Bay at its mouth in Cotabato City. 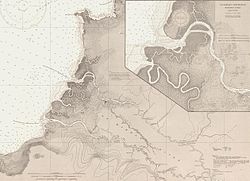 Details of the delta of the Mindanao River

As the Mindanao River meets Illana Bay, it branches out into two distributaries, the Cotabato in the north and the Tamontaka in the south at Cotabato City.

The river has recently been clogged with water hyacinths, causing it to overflow after days of heavy rain. Floodwaters submerged at least 37 villages in Cotabato City alone and displaced some 6,000 families.

President Benigno Aquino III ordered public works and military personnel to clear the river of up to 20 hectares of water lily growth.[3]