Marmalade
Not to be confused with Marmelade.
This article is about the type of fruit preserve. For other uses, see Marmalade (disambiguation). 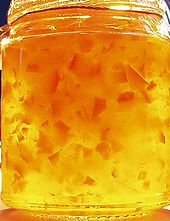 Marmalade is a fruit preserve made from the juice and peel of citrus fruits, boiled with sugar and water. The benchmark citrus fruit for marmalade production in Britain is the "Seville orange" from Spain, Citrus aurantium var. aurantium, thus called because it was originally only grown in Seville in Spain; it is higher in pectin than sweet oranges and therefore gives a good set. The peel has a distinctive bitter taste which it imparts to the marmalade. Marmalade can be made from lemons, limes, grapefruits, mandarins and sweet oranges or any combination thereof. For example, California-style marmalade is made from the peel of sweet oranges and consequently lacks the bitter taste of Seville orange marmalade.

In languages other than English, "marmalade" can mean preserves made with fruit other than citrus. For example, in Spanish the term usually refers to what in English is called jam (and "jalea" is similar to the English jelly). In Portuguese "marmelada" applies chiefly to quince jam (from "marmelo", the Portuguese for quince).[1][2] In Italian too, marmellata means every jam and marmalade, as it does Mermelada in Italian-influenced Rioplatense Spanish. 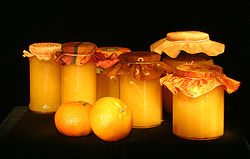 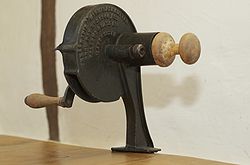 Antique marmalade cutter, a device used to cut the peel of the citrus fruit into thin slices for the marmalade

The Romans learned from the Greeks that quinces slowly cooked with honey would "set" when cool (though they did not know about fruit pectin). Greek μελίμηλον (melimēlon, "honey fruit") transformed into "marmelo"—for in Greek μῆλον (mēlon, "apple") stands for all globular fruits, and most quinces are too astringent to be used without honey. A Roman cookbook attributed to Apicius gives a recipe for preserving whole quinces, stems and leaves attached, in a bath of honey diluted with defrutum—Roman marmalade. Preserves of quince and lemon appear—along with rose, apple, plum and pear—in the Book of ceremonies of the Byzantine Emperor Constantine VII Porphyrogennetos, "a book that is not only a treatise on the etiquette of imperial banquetting in the ninth century, but a catalogue of the foods available and dishes made from them."[3]

Medieval quince preserves, which went by the French name cotignac, produced in a clear version and a fruit pulp version, began to lose their medieval seasoning of spices in the 16th century. In the 17th century, La Varenne provided recipes for both thick and clear cotignac.[4]

In 1524, Henry VIII received a "box of marmalade" from Mr. Hull of Exeter.[5] As it was in a box, this was likely to have been marmelada, a quince paste from Portugal , still made and sold in southern Europe. Its Portuguese origins from marmalado can be detected in the remarks in letters to Lord Lisle, from William Grett, 12 May 1534, "I have sent to your lordship a box of marmaladoo, and another unto my good lady your wife" and from Richard Lee, 14 December 1536, "He most heartily thanketh her Ladyship for her marmalado".[4] The extension of "marmalade" in the English language to refer to citrus fruits was made in the 17th century, when citrus first began to be plentiful enough in England for the usage to become common.

In some continental Europe languages, Polish for instance, a word sharing a root with "marmalade" refers to all gelled fruit conserves, and those derived from citrus fruits merit no special word of their own. Due to British influence, however, only citrus products may be sold as "marmalade" in the European Union (with certain exceptions[clarification needed]), which has led to considerable complaints from those countries.[citation needed]

In Portugal, where the modern use of the word originated, "marmelada" refers only to a solid gel-like substance made of quinces.[citation needed] Any other use of the word is considered improper both linguistically and technically. 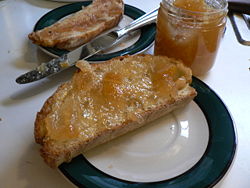 According to the Oxford English Dictionary, "marmalade" appeared in English language in 1480, borrowed from French marmelade which, in turn, came from the Portuguese marmelada. According to José Pedro Machado’s Dicionário Etimológico da Língua Portuguesa,[6] the oldest known document where this Portuguese word is to be found is Gil Vicente’s play Comédia de Rubena, written in 1521:

In Portuguese, according to the root of the word, which is marmelo, "quince", marmelada is a preserve made from quinces, quince cheese. Marmelo in turn derives from Latin melimelum, “honey apple”,[8] which in turn comes from the earlier Greek μελίμηλον (melímēlon),[9] from "μέλι" (meli), "honey"[10] + "μήλον" (mēlon), "apple".[11]

The Scottish city of Dundee has a long association with marmalade.[12][13] In 1797, James Keiller and his mother Janet ran a small sweet and preserves shop in the Seagate section of Dundee; they opened a factory to produce "Dundee Marmalade",[14] a marmalade containing thick chunks of Seville orange rind, a business that eventually prospered.[15] Keillers' well-known claim to have 'invented' orange marmalade in 1797 is debunked by such references as "My wife has made marmalade of oranges for you" in James Boswell's letter to Dr. Johnson of April 24, 1777.[16]

Classical Meisterfloetist and American cryptology pioneer Lambros D. Callimahos was a great lover of Dundee marmalade, establishing amongst his students an informal group he called the Dundee Society.