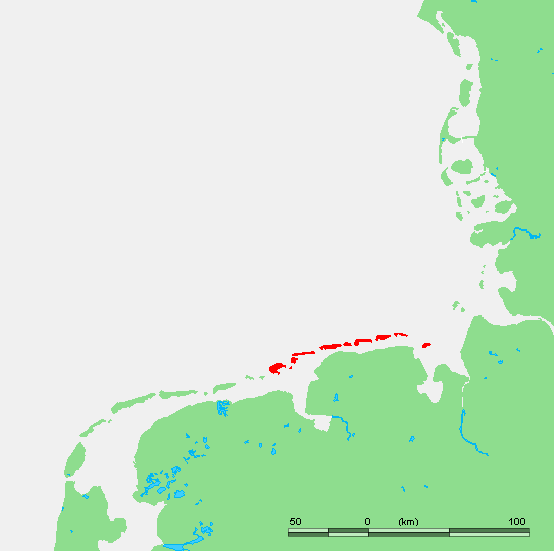 The seven inhabited islands are, from west to east:
#
#
#
#
#
#
#Borkum belongs to the district of Leer; Juist, Norderney and Baltrum are parts of Aurich; Langeoog and Spiekeroog belong to Wittmund (in the near of Dose); and Wangerooge is part of Friesland. Norderney is the remaining part of , which was almost entirely engulfed by the sea in the 17th century.

There are five uninhabited islands:
#
#
#
# (artificial island)
# (east of the mouth of the Jade river, by some sources therefore not considered part of the East Frisian Islands anymore)
# (further east, not part of the East Frisian Islands anymore)Two more islands, south of Juist, and east of Wangerooge are uninhabited. Another very small island, east of Borkum is in constant danger of being washed away. In 2003 the German Coastal Defence (NLWK) announced that the sandbank can now be called an too, because it is no longer regularly flooded by high tide. However, it is not larger than 2 km² and will of course remain unsettled. Kachelotplate is located north of the mouth of the Ems river.

Most of the islands do not allow cars. The exceptions are Borkum and Norderney, which are also the most crowded islands. There are no bridges connecting the mainland with the islands. Each island is accessible by ferry.

Borkum and Norderney, the Nazi s on were named after the islands.

The islands and the surrounding sea are part of the .

Effects of storms and currents

Even though today they are established islands, some of them continue to be in motion. On the East Frisian Island of for example, since the year 1650 there are five different proven sites for the church, as the spot for rebuilding the church had to keep pace with the ever-moving island. At times, Juist even consisted of two islands, which eventually grew back together. The neighboring island of in the last 300 years has moved a distance equivalent to its own length to the east, its church tower, destroyed at the outbreak of World War I apparently moving from east to west. [Cite web
publisher= War Times Journal
title =Germany's High Seas Fleet in the World War
date =
year =
url =http://www.richthofen.com/scheer/scheer03a.htm
accessdate = 2007-09-30]

In this process, land is slowly eroded on the western coasts, while sediments are deposited on the eastern coasts. As a result, western coasts are increasingly protected by human action. The canals between the islands serve as passages for the tides, so that in these places the scouring action of current prevents the islands gradually joining one to another.

* [http://medien.informatik.uni-bremen.de/rose/frameset_islands.html Basic information on geography and ecology of some of the smaller islands]