Jacques Brel Is Alive and Well and Living in Paris (film)

Jacques Brel Is Alive and Well and Living in Paris (film) 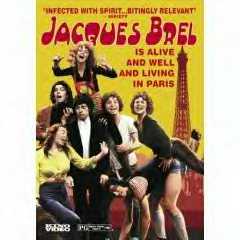 "Jacques Brel Is Alive and Well and Living in Paris" is a 1975 French/Canadian directed by . The by Eric Blau is an adaptation of his book for the long-running revue of the same name. The score is comprised of songs with music by and English translations of the original French lyrics by Blau and .

"Jacques Brel Is Alive and Well and Living in Paris" was produced and released by the , which adapted theatrical works for a subscription-driven cinema series. It was the second of two musical films created by the American Film Theatre, following "Lost in the Stars" in 1974.

The film opens in a theater, where three audience members – a military officer, a taxi driver, and a woman on a shopping trip - discover they are being depicted as marionette s against a backdrop of newsreel footage from the 1920s through the 1950s. They find themselves trapped backstage amidst bizarre circumstances . . . the puppet master is found dead above the stage, a gigantic plaster hand drops from the ceiling to the floor, and a deafening siren blares endlessly. The trio escapes from the theater to a beach, where the military officer locates the siren and kicks it, causing it to blow up. [ [http://www.filmthreat.com/index.php?section=reviews&Id=1491 "Film Threat" review] ] The film then resumes the stage show's plotless structure. In this version, different cinematic interpretations are used to illustrate the show's score. A straightforward approach is for some songs: "Bachelor's Dance" finds a bartender singing out loud of his potential mate while eyeing the female patrons of his establishment, while "Amsterdam" places a weary inebriate in a barroom corner while he watches the mix of sailors and sexual predators pass by his table. Other songs are interpreted in a surreal manner: with "Marieke," images of a large red ball bouncing off a cliff are mixed with that of Elly Stone, dressed in a suit and tie, pursuing a little girl amidst the headstones of a cemetery.

The original Off-Broadway revue was a series of 25 songs performed by two men and two women. For the film version, screenwriter Blau and director Heroux reconfigured the presentation. One of the women was dropped from the cast line-up, and a chorus consisting of young s and eccentric-looking characters was added.

Mort Shuman and Elly Stone were members of the original off-Broadway cast, while Joe Masiell was a replacement later in the run. These were the first and only film performances of Stone and Masiell, whose respective careers focused on and performances ["Halliwell's Film & Video Guide", HarperResource, ISBN 0060508906] . Jacques Brel, who had no part in the original stage production, was recruited for a guest appearance.

served as the film's and orchestrated and conducted the score. The order of the songs was rearranged, and the original overture was cut, replaced with the song "Madeleine" performed during the title sequence by off-camera singers. Three songs from the original revue were also cut: "The Girls And The Dogs (Les filles et les chiens)," "Fanette (La Fanette)," and “You're Not Alone (Jef)." Five new songs were added in their place: "The Taxi Cab (Le gaz)," "My Childhood (Mon enfance)," "Last Supper (Le dernier repas)," "Song for Old Lovers (La chanson des vieux amants)," and "." The latter song was performed by Brel in French without English subtitles (there was already a popular English-language translation by ).

Interiors were filmed at the Studios de la Victorine in .

"Jacques Brel is Alive and Well and Living in Paris" has no dialogue; the entire film is sung.

The film did not receive a strong reaction from the critics at the time of its release. In his review in the "", said, "Mr. Heroux, with the obvious cooperation of Eric Blau and Mort Shuman . . . has transformed what was essentially a concert into an extravaganza of surreal images that keep messing things up. The images are vivid and disconnected to one another (good) but they inevitably wind up being visual translations of the lyrics (bad). It's a rather classy variation on the format employed by the old "Hit Parade" television show, though it's seldom as witty." [ [http://movies.nytimes.com/movie/review?res=9C00E5DA1E3DE034BC4D51DFB466838E669EDE "New York Times" review] ]

Three decades later, when the film was released in the U.S. on DVD by Kino on Video, reaction was still negative. of "" wrote, "As interpreted here, the revue format has the same pacing problems that a stack of music videos would have if there were not enough variety. Many of the songs are amusing or emotional, but after a while too many seem similar - a plaintive half-melody that slowly rises in intensity and volume, until the singer is practically screaming. The elaborate scene changes don't help the fact that we're not seeing live performances - the frantic singers are mouthing to playback, which robs the material of its stage immediacy." [ [http://www.dvdtalk.com/dvdsavant/s1110aft3.html "DVD Talk review"] ]

Writing in "", Ed Siegel called the film "the biggest dud of all" in the American Film Theatre series and added, "As directed by Denis Heroux, "Brel" looks like an amateurish version of "Hair"." [ [http://www.boston.com/news/globe/living/articles/2003/11/16/a_union_of_stage_screen_brings_out_the_worst_of_each/ "Boston Globe" review] ]