South African Astronomical Observatory (SAAO) is the national center for optical and infrared astronomy in South Africa. It was established in 1972. The observatory is run by the National Research Foundation of South Africa. The facility's function is to conduct research in astronomy and astrophysics. The primary telescopes are located in Sutherland, which is 370 kilometres (230 mi) from Observatory, Cape Town, which is where the headquarters is located. [1]

The SAAO has international links worldwide that exchange scientific and technological collaboration. Contributions from the South African Astronomical Observatory to the science field include the development of a spherical aberration corrector and the Southern African Large Telescope, otherwise known as SALT.

The Noon Gun on Cape Town's Signal Hill is fired remotely by a time signal from the Observatory.

The buildings of the South African Astronomical Observatory in Cape Town.

SAAO was established in January 1972 as a result of a joint agreement by the Council for Scientific and Industrial Research (CSIR) of South Africa and Science and Engineering Research Council (SERC) of United Kingdom. The headquarters are located on the grounds of the old Royal Observatory where the main building, offices, national library for astronomy and computer facilities are housed. Historic telescopes are also found at the headquarters in a number of domes and a small museum that displays scientific instruments. The South African Astronomical Observatory is administered as a National Facility under management of the National Research Foundation (NRF), now formerly Foundation for Research Development (FRD). In 1974, when the Radcliffe Observatory in Pretoria closed, the Royal Observatory and the Republic Observatory combined facilities. The Council for Scientific and Industrial Research (CSIR) purchased the 1.9 Radcliffe telescope and transported it to Sutherland.[7]

The major observing facilities are however located near the town of Sutherland some 370 kilometres (230 mi)[1] from Cape Town.

Also known as the Victoria telescope, this telescope is fitted with a 24 inches (61 cm) photographic objective and a 18 inches (46 cm) visual objective.[9][10] The telescope was built by Grubb and completed in 1897. It was officially opened on 10 September 1901 by Sir Walter Hely-Hutchinson.[10]

The PED was built by members of the Karoo Array Telescope team in order to gain experience in the construction of interferometric telescopes. It is located on the grounds of the SAAO Headoffice in Observatory, Cape Town and consists of six 2.5 metres (8.2 ft) and one 3.4 metres (11 ft) antennas suitable for work at 1.4 GHz.[11]

The 0.5-m telescope at Sutherland

This 0.5 metres (20 in) reflector was originally built for the Republic Observatory in 1967, but was moved to the Sutherland site in 1972.

This 29.5 inches (75 cm) telescope was originally called the Automatic Photometric Telescope, but has been renamed the Alan Cousins Telescope in honour of Alan William James Cousins.[12][13]

One of six telescopes in the Birmingham Solar Oscillations Network

This 40 inches (1.0 m) telescope was originally located at SAAO Headoffice in Observatory, Cape Town, but has since moved to the Sutherland site.[14] This telescope participates in the PLANET network.[15]

The IRSF is a 140 centimetres (55 in) reflector fitted with a 3 colour Infrared Imager.[16] Originally built as part of the Magellanic Clouds - A Thorough Study grant from the Japanese Ministry of Education, Culture, Sports, Science and Technology in 2000.[17] Other studies the telescope participated in include:

One of the two 1.20 metres (47 in) telescopes of the MOnitoring NEtwork of Telescopes Project is located at Sutherland, its twin can be found at the McDonald Observatory in Texas.[19] The MONET telescopes are Robotic telescope controllable via the Internet and was constructed by the University of Göttingen.[20] Remote Telescope Markup Language is used to control the telescopes remotely.[21]

Not to be confused with the Radcliffe 18/24-inch Double Refractor at the University of London Observatory.

The 1.9 metres (75 in) Radcliffe Telescope was commissioned for the Radcliffe Observatory in Pretoria and was operated between 1948 and 1972. In 1972 it was moved to Sutherland. Between 1951 and 2004 it was the largest telescope in South Africa.[22]

SALT was inaugurated in November 2005. It is the largest single optical telescope in the Southern Hemisphere, with a hexagonal mirror array 11 meters across. SALT shares similarities with the Hobby-Eberly Telescope (HET) in Texas. The Southern African Large Telescope gathers twenty-five times as much light as any other existing African Telescope.[23] With this larger mirror array, SALT can record distant stars, galaxies and quasars. 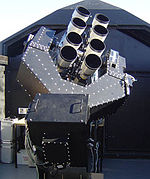 The Wide Angle Search for Planets consists of two robotic telescopes, the one located at SAAO Sutherland and the other at Roque de los Muchachos Observatory on the island of La Palma in the Canaries.[24] WASP-17b, the first exoplanet known to have a retrograde orbit was discovered in 2009 using this array.

KELT-South (Kilodegree Extremely Little Telescope - South) is a small robotic telescope that is designed to detect transiting extrasolar planets. The telescope is owned and operated by Vanderbilt University and was based on the design of KELT-North, which was conceived and designed at the Ohio State University, Department of Astronomy. The KELT-South telescope will serve as a counterpart to its northern twin, surveying the southern sky for transiting planets over the next few years.

Used for the monitoring of variable stars and other transient events. This telescope is a joint project between SAAO and the Yonsei University, Korea.[20]

The GeoForschungsZentrum, Potsdam in cooperation with the National Research Foundation of South Africa constructed the SAGOS between 1998 and 2000. SAGOS consist of a 1 Hz permanent GPS station, a superconducting gravimeter, meteorological sensors, and a tri-axial magnetometer. The GPS station is also used in support of the CHAllenging Minisatellite Payload (CHAMP) and Gravity Recovery and Climate Experiment (GRACE) space missions.[25]