Most Civil Defense Geiger Counters and ion-chamber survey meters were issued by the governmental Civil Defense organizations in several countries from the 1950s in the midst of the Cold War in an effort to help prepare citizens for a nuclear attack. Although often referred to as geiger counters, most CD devices were ion-chamber radiological survey meters capable of measuring only high levels of radiation that would be present after a major nuclear event.

CD Counters came in a variety of different models, each with specific capabilities. Each of these models has an analog meter from 1 to 5, with 1/10 tick marks. Thus, at X10, the meter reads from 1 to 50. Due to circuit instability, the actual value may be +/- 2 or 3.

CD meters were produced by a number of different firms under contract. Victoreen, Lionel, Electro Neutronics, Nuclear Measurements, Chatham Electronics, International Pump and Machine Works, Universal Atomics, Anton Electronic Laboratories; Landers, Frary, & Clark; El Tronics, Jordan, and Nuclear Chicago are among the many manufacturers contracted.Regardless of producer, most counters exhibit the same basic physical characteristics, albeit with slight variations between some production runs: a yellow case with black knobs and meter bezels. Most US meters had a "CD" sticker on the side of the case.

The CD V-700 is a Geiger counter employing a probe equipped with a Geiger–Müller tube manufactured by several companies under contract to US federal civil defense agencies in the 1950s and 1960s. This unit is quite sensitive and can be used to measure low levels of Gamma radiation and detect Beta radiation. In cases of high-radiation fields, the geiger tube can saturate, causing the meter to read a very low level of radiation (close to 0 R/h) hence the necessity of the companion ion-chamber survey meters.

The CD V-718 is a variation of the US military-issue AN/VDR-2 RADIAC made by Nuclear Research Corporation, located in the US State of New Jersey. FEMA purchased a quantity of CD V-718s in the 1990s as a supplement to and partial replacement for the older meters in the inventory. The CD V-718 differs from the military AN/VDR-2 primarily by being painted bright "civil defense" yellow instead of olive green and being graduated in Röntgens rather than Grays. A much more modern and sophisticated device than earlier CD meters and equipped with a probe containing two Geiger-Meller tubes of differing sensitivities, the CD V-718 can cover a much wider range of radiation levels than the earlier Geiger counters and ion-chamber survey meters combined (from .001mR/hr to 10,000 R/hr). As a result of its military heritage, the CD-V-718 is far more rugged than earlier CD meters, and can easily be mounted in vehicles.[1]

If the meter on any of the ion chamber devices are observed to respond at all to a radiation source, evacuation of the area should be considered. No legally exempt source of gamma radiation would be expected to cause any visible deflection of the meter, so it might be assumed that such a radiation field could be dangerous. Such a meter would not be expected to detect the presence of radiation except the very high levels that might be found in the event of a nuclear weapon detonation or a major release of radioactive material as from a nuclear reactor meltdown. 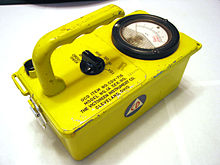 An example of the CDV-715 survey meter.

By far the most common US civil defense meter on the market today. This is a simple ion chamber radiological survey meter, specifically designed for high-radiation fields for which Geiger counters will give incorrect readings (see above). Survey meters do not read alpha or beta radiation. They work by radiation penetrating the case of the unit and the enclosed ionization chamber to produce a visible reading between 0.1R/hr and 500R/hr (X0.1, X1, X10, and X100 scales). 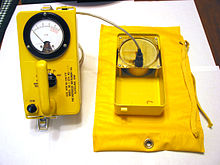 Similar to the CDV-715, this unit reads from 0.1R/hr to 500R/hr. It is also a survey meter with an ionization chamber, however this unit's chamber is detachable for hanging outside your shelter or basement. When used, the ionization chamber would be inserted into a yellow anti-contamination bag, tied off, and hung outside a bomb shelter to measure radioactivity levels from a safe distance. An extension coaxial cord, typically stored inside the unit, is then run from the outdoor chamber to the indoor meter. The coaxial spool is used to prop the meter up for reading. This would allow those hiding to wait until outside radiation levels have fallen to a "safe" level before emerging. When using the extension cord, a slight delay in measurement readings occurs, however this is not really an issue as outdoor radiation levels are unlikely to change quickly. 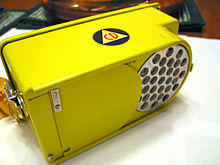 An example of the CDV-720 survey meter, turned upside down, showing the retractable beta shield.

Another meter of note is the Kearny Fallout Meter. The plans for this meter were published in Appendix C of Nuclear War Survival Skills by Cresson Kearny from research performed at Oak Ridge National Laboratory. It was designed to be able to be constructed from household materials by someone with moderate mechanical ability on the eve of an attack. The plans are presented in a newspaper printable format.

The United States manufactured approximately 500,000 geiger counters. Britain manufactured about 20,000 of each of its major types, and is second after the U.S. Some instruments were also manufactured by other countries in smaller numbers.

The American instruments dating from the Kennedy administration era were designed to use low voltage transistor electronics, and the batteries are still available today. However, most British civil defence instruments retained until 1982 or later were manufactured from 1953-7, and required high voltage batteries which became obsolete after portable valve radios were superseded by transistor ones.

All British civil defence instruments were jointly designed by the Home Office and the Ministry of Defence, and were also a military issue. 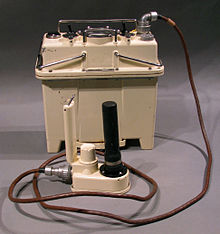 A British Meter, Contamination, No. 1 set - lacking headphones and haversack.

The first large scale British civil defence issue was the Geiger-Müller counter Meter, Contamination, No. 1 set - stock number 5CG0012, of 1953 [1]. It had 0 - 10 mR/hour range with external probe and headphones. This was designed to use two 150 volt batteries, although later they were fitted with an inverter which used four 1.35 volt mercury cells or, alternatively, a mains electricity power pack. Many of these units remained in service until the 1980s. There was also a Mk. 2 model which used rubber connectors and cable for the probe unit, compared to the Plessey connectors of the Mk.1.

This used cold-cathode valves and very high impedance circuitry throughout to extend useful battery life as long as possible with the existing technology.

The British 'Radiac Survey Meter No 2' [2] dates from 1953-6, and required obsolete 15 and 30 volt high voltage batteries in addition to a 1.5 volt standard cell (which powers the valve heaters and light bulb). There was also a training unit [3] which measured 0-300 mR, and ran on four 30V cells plus one 1.5V for the filaments. This meter used a large GM tube as opposed to the ion chamber of the RSM No 2.

These meters were favoured as they had been tested on fallout in Australia after Operation Buffalo nuclear tests, and were retained until 1982 by commissioning a manufacturer to regularly produce special production runs of the obsolete batteries.

The UK's Royal Observer Corps initially used the RSM No 2 as its prime radiation detector until it was replaced by the specially designed 'Fixed Survey Meter' which used the same obsolete high voltage batteries as the RSM. The ROC retained the RSM No 2 for use during external 'post attack' mobile monitoring surveys.

In 1982 the British PDRM82 was issued for civil defence. This 'Tricorder'-design PDRM82 [4] is lightweight with an LCD display and a plastic case and has all the electronics including miniature geiger tube (shielded against beta particles) on a single, EMP-hardened, PCB. It was designed by Plessey to use three standard 1.5 volt cells, and is microprocessor controlled with digital readout.

For use by the Royal Observer Corps the instrument was also provided in the fixed version designated the PDRM82(F). The fixed version had an external coaxial socket mounted on its rear, that accepted a cable from the above ground ionisation detector under a polycarbinate dome. For training purposes timed simulated readings could be fed to the meter from an Eprom.

The 1958-9 'Quartz Fibre Dosimeter Chargers, No. 1 and 2' were retained until the early 1990s as they do not require batteries at all (they incorporate a simple handle-driven generator). A later British civil defence dosimeter charger was developed by R. A. Stephen Ltd and manufactured from 1967–88, and uses a single 1.5 volt cell. It is similar to American dosimeter chargers.